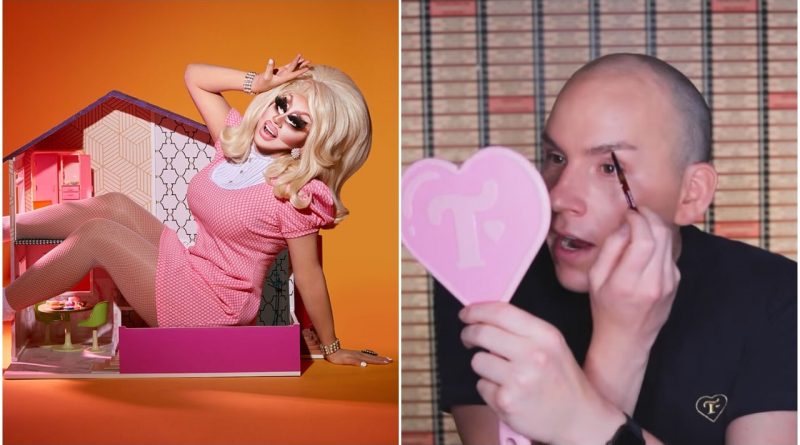 On her popular YouTube channel the RuPaul’s Drag Race All Stars 3 winner uploaded a video showing her fans how she achieves her boy beauty look.

Trixie explains: “How many times have I gotten into drag on this channel? And I actually use makeup on days where I’m not in drag.”

She goes on to say she does this because her skin is “wrecked” from doing drag so often, so her out-of-drag skincare and makeup products help to keep it looking fresh.

Despite saying she feels “very uncomfortable being out of drag for an entire video and I hope this never happens again” she hopes fans will find some tips and tricks from the video.

She starts off with the Gentle Anti-Aging Toner from brand Iris + Beau by Real Housewives of Salt Lake City star Whitney Rose.

Trixie jokes: “I don’t know what toner does! I guess I went to beauty school okay? But I went to film Drag Race during the chapter on aesthetics, so I really didn’t get the most complete skincare education.”

She then reveals that she sometimes prefers to use an oil over a moisturiser, in particular the CEO Glow Face Oil from Sunday Riley.

The product is described by Trixie as “very light and brightening” and she says she only needs about two drops of it to cover her whole face which “weirdly” leaves her skin less oily than moisturiser.

When getting out of drag Trixie says she “has to put on moisturiser” because her skin is so dry.

Her go-to moisturiser after a full day in drag is the Holy Hydration Face Cream from E.L.F., which is “cheap and fragrance free”.

Another regular product from Trixie’s skincare routine includes exfoliating peel pads from Peter Thomas Roth, but she recommends being careful with this one because if “you use this every day you would be a skeleton in two weeks.”

She then moves onto her makeup routine, saying: “The great thing about my makeup situation out-of-drag is it’s so simple.”

So what exactly does Trixie use to get her self-proclaimed “effortless beauty”?

First up is Urban Decay’s Naked Skin One & Done Hybird Complexion Perfector which she jokingly recommends if you’re “an ageing homosexual who just needs to even out your skin”.

She says: “I like something with sunblock in it and this is my favourite tinted moisturiser I have ever used in the history of earth.”

“I don’t like people to know I have makeup on out of drag – even though I’m wearing makeup – and this is almost velvet, it doesn’t look dry or glowy.”

She then moves onto a powder foundation named Turn Up The Base from brand One/Size and notes three of her favourite concealers.

She says Trixie Cosmetics “may or may not be testing bronzers,” but for now her favourite is City Bronzer by Maybelline, which is “so affordable and so nice.”

She moves on to the “biggest transformation” which is eyebrow gel.

Trixie says: “I am fine with being bald it’s never bothered me but I’ve always had weak eyebrows they just don’t do anything, so brow gel? Obsessed.”

Her fave is the Bowkiki Tinted Nourishing Eyebrow Gel from One/Size and she says viewers will “gag” at the difference after using the product.

Talking about her overall boy makeup routine she jokes: “I just want to look like I don’t traumatise my skin for a living, that’s the main thing.”