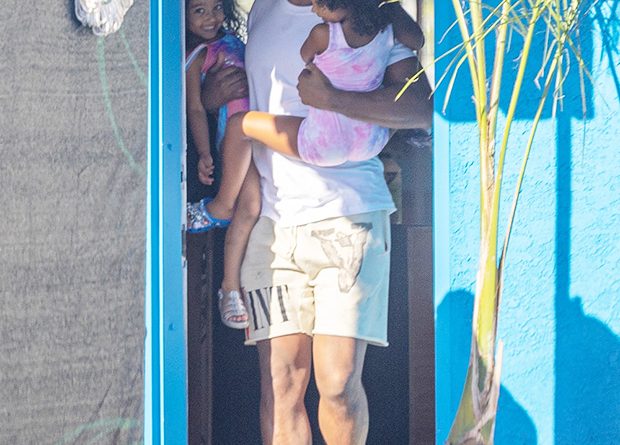 
Tristan Thompson, 31, stepped up as a doting father to his daughter True, 4, on Monday, June 20. The NBA star was seen picking up his and Khloe Kardashian‘s little girl, as well as Kim Kardashian and Kanye West‘s daughter Chicago West, 4, from dance class in Los Angeles. Tristan carried both girls in each of his arms and brought them into his car to go home. He had a big smile on his face that indicated he was enjoying the daddy duty.

Tristan dressed casual in a white T-shirt and a pair of tan shorts. The Chicago Bulls player also rocked a white hat with red letterings, as well as white Nike socks and matching Air Force 1 sneakers. True and Chicago looked so adorable in colorful leotards for their dance practice. The cousins also each wore pairs of small sandals. They both wrapped their arms and legs around Tristan as he took them home from the dance session, which they regularly attend along with their cousin Dream Kardashian, 5.

Two days before the dance class, Tristan reunited with his ex Khloe, 37, for a pre-Father’s Day lunch. They were joined by True and Khloe’s mom Kris Jenner, 66. The outing fueled reconciliation rumors about Khloe and Tristan, but it appears that they’re still broken up and just on good terms to co-parent their daughter. The exes haven’t been together since late 2021, when Khloe ended things for good after she learned Tristan fathered another baby with a woman named Maralee Nichols.

The scandal played out on the finale of Hulu’s The Kardashians, which aired on June 16. Khloe got so anxious while dealing with the aftermath of the situation that she wound up dehydrated and even fainted. The Good American co-founder also told viewers that she was done with Tristan for good, after previously taking him back following several acts of infidelity.

“I’m just exhausted,” she said in the episode. “I’m exhausted of dealing with everything. So people might think my approach is crazy or weird and I’m definitely numb and all that, but I’ve done this so many times now. It’s humiliating. There’s no more tears left to cry. It’s time to walk away. I don’t feel guilty about that. I tried so hard.”

Maralee Nichols: 5 Things To Know About The Mother Of Tristan Thompson’s 3rd Child