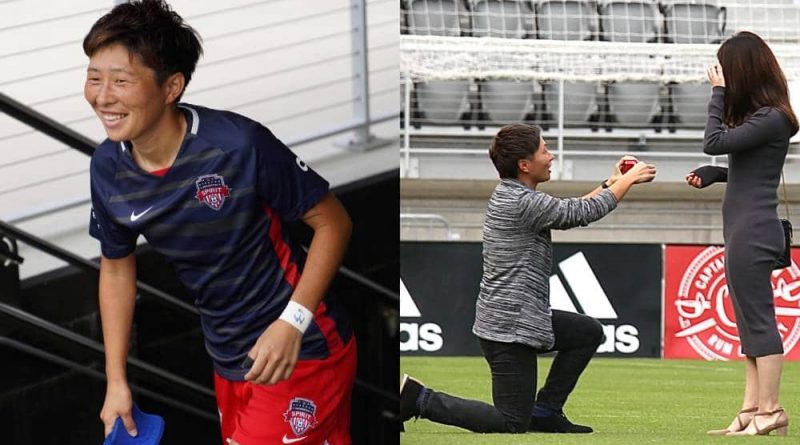 Japanese football player Kumi Yokoyama, who came out as trans earlier this year, proposed to their girlfriend at Audi Field. (Getty/Tony Quinn/ISI Photos/Instagram/@yoko10_official)

Yokoyama came out publicly as a transgender man earlier this year, making them the most high-profile athlete in Japan to do so. They played on Japan’s national team in the 2019 FIFA Women’s World Cup and later moved to the US where they play for Washington Spirit in the National Women’s Soccer League (NWSL).

Over the weekend, he got on one knee to propose to his girlfriend. Pictures of the loving couple appeared on the large screens of the stadium, and they celebrated with a glass of something bubbly on the field.

“She said ‘YES’!” Yokoyama wrote on social media. “Thank you for everyone!!!”

The Washington Spirit, NWSL, football stars and fans all sent the couple their well-wishes for a wonderful future on social media.

Happy Monday, here’s something to make you smile!

Kumi Yokoyama and their partner are engaged after a proposal at Audi Field!

Yokoyama came out in a YouTube video in June on the channel of their former teammate Yuki Nagasato. They explained they “dated several women” in the past but “had to stay closeted in Japan”. But they said that all changed when they moved to the US and Europe to compete, and they realised they could live their truth openly.

“In Japan, I’d always be asked if I had a boyfriend, but here [in the United States] I’m asked if I have a boyfriend or girlfriend,” Yokoyama explained. “When my girlfriend said there was no reason for me to stay closeted, it really hit me.”

Yokoyama added he “found the courage to come out” as trans because he believed it would be “harder to live closeted” when he thought “about my life going forward”. He also said he planned to eventually “quit soccer and live as a man” in the future.

Yokoyama also highlighted that there is a lack of visibility and understanding in Japan about the LGBT+ community. He said more people in Japan are “becoming familiar with the acronym LGBTQ”, but he “thought if influential people like myself don’t come out and use their voices [awareness and acceptance] won’t grow”.

LGBT+ rights are lacking in Japan

Support and awareness of LGBT+ identities are growing in Japan, but the queer community lacks many legal protections in the country.

Currently, Japan’s constitution defines marriage as based on the “mutual consent of both sexes”. But a landmark ruling earlier this year from the Sapporo district said that blocking same-sex marriage is “unconstitutional”.

The ruling, however, was seen as largely symbolic.

Several LGBT+ and human rights activists called for Japan to introduce a law to protect queer people from discrimination based on their sexual orientation and gender identity ahead of the Olympic games. But their pleas were ignored, and no such legislation was introduced in time.

Transgender people in Japan must undergo surgery and be sterilised to have their gender recognised on official documents – a requirement that human rights and LGBT+ groups have criticised for being archaic and discriminatory.

In October, Gen Suzuki, a Japanese trans man, filed a request with the courts to legally change his gender without undergoing the horrific surgical requirements as he intended to marry his female partner. He said it was “nonsensical that trans people cannot enjoy marriage equality in Japan” unless they legally change their gender identity on official documents.