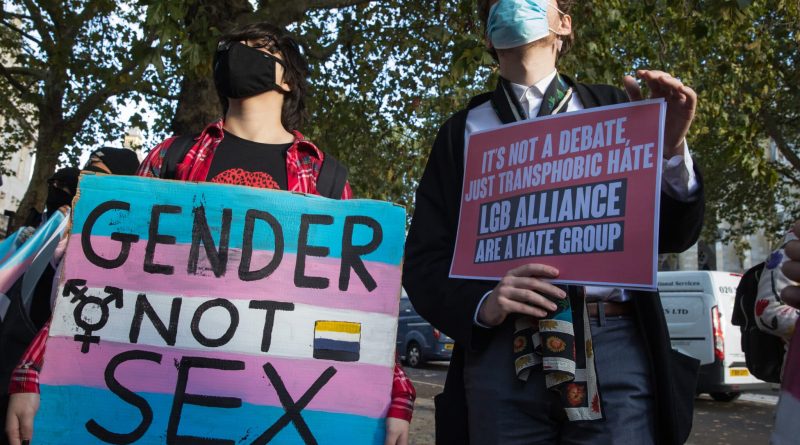 A trans woman was called a “homophobic nonce” and a “f**king pervert” while attending the conference of anti-trans charity LGB Alliance.

The conference, held on 21 October at the Queen Elizabeth II Centre in central London, was attended by many prominent “gender critical” campaigners.

Those invited to speak on panels about “free speech” and the threat of “transgender ideology” included many straight supporters of the LGB Alliance, such as comedy writer Graham Linehan, Labour MP Rosie Duffield and Tory MP Jackie Doyle-Price. JK Rowling did not attend, but the LGB Alliance paid for a cut-out of her to be brought to the conference centre so attendees could pose with the controversial author.

Anti-trans groups including Transgender Trend and the Women’s Human Rights Campaign, which calls for the “elimination” of “the practice of transgenderism“, had stalls at the conference.

Reports on social media suggest that the number of attendees were in the low hundreds.

The upsetting incident happened after Jen Ives, a bisexual trans woman and a comedian, had a “nice chat” with two men. One of them she recognised as Alex Bramham, an LGB Alliance supporter who was escorted away from Manchester Pride this summer by police, and the other she did not.

“We were just having a nice chat,” Jen told PinkNews. “He [Alex] knew I was trans at this point, and was respecting my pronouns and all that kind of stuff. But there was another guy who was with us, who was a bit taller, and when he found out I was trans he went away. He made a beeline back to the conference hall.”

After a couple of minutes, Jen finished talking to Alex and headed towards her friends, saying she needed to use the bathroom. She’d already used the women’s toilets twice that day, and while they had been “full of gender-critical women” she says “nobody said a word to me or batted an eyelid”.

But this time, “I didn’t actually get to the toilets”, Jen says. The taller man she’d been talking to ran back out of the conference hall area and ran towards her, pointing a camera at her.

“He was much taller than me, leaning over me with his camera out,” she remembers. “He was calling me a nonce, a f**king pervert. He was ranting about oestrogen and hormones and all kinds of stuff.”

In a recording of the incident heard by PinkNews, the man says: “I couldn’t get a blood test the other day, but you get a blood test for stopping your f**king perverted hormone levels from f**king tanking.”

He continues: “You’re noncey as f**k.” Later he says: “You are a mentally ill pervert” and calls Jen a “homophobic man”.

Other voices saying “get out, we don’t want you here!” can also be heard shouting in the background, as well as others shouting “You are a man! You are a man!”

People in the hall began coming over, as did LGB Alliance conference attendees leaving a talk. “With security just watching on, not intervening, him quite close to me with his camera,” Jen says. “One [security officer] was standing right by the doors, about five feet away, just watching on. Then more arrived, but they still didn’t intervene. The only people who intervened were a couple of people from the LGB Alliance, but they were trying to do damage control, they were just telling him not to engage.”

But then some LGB Alliance members “began making their own arguments against me”, she says. “A lot of people came at me halfway through the altercation, not knowing what was going on, just blaming me and saying: ‘You were trying to use the women’s toilet.’”

Jen continues: “A few women came over, telling me that I was trying to be provocative. Telling me that I had ‘brought this on myself’, that I could use the men’s toilets if I want to. They told me I was endangering women’s safety. Someone near me said that someone’s baby was raped in a Morrison’s recently. I don’t know what they were talking about.”

“And the man [who had called Jen noncey as f**k] kept saying, ‘You’re going into the women’s toilets, you’re a man, an autogynephilic male,’ is what he kept saying.”

The man, who had been standing over Jen while all this was happening, eventually went away. Some LGB Alliance women told Jen she should leave, and that she was “not welcome there”.

Jen says that a man who identified himself as the LGB Alliance’s press officer then came up to her, the two talked about what had happened and he apologised to her.

By this point, Jen had spent more than six hours at the Queen Elizabeth II Centre where the LGB Alliance conference was held. She had paid for her ticket and picked up some merchandise while she was there – an LGB Alliance t-shirt with the phrase “the female penis does not stand up” on it.

She wanted to make a formal complaint to security about the incident, but after waiting for more than two hours for someone to take her statement, she left.