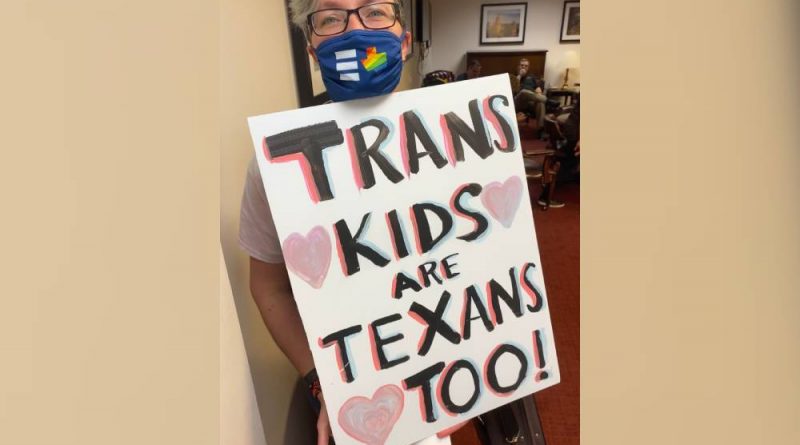 Hillary Moore-Embry holds up a sign that reads “Trans Kids are Texans Too!” in support of the trans community in Texas. (Provided)

After Texas passed an anti-trans sports ban, one parent has warned the fight for trans rights will bleed over into other states as the hateful bill is “just a foot in the door”.

Texas has introduced the most bills targeting the transgender community in the USA, according to Freedom for All Americans’ legislative tracker. The state has proposed more than 40 anti-trans bills in 2021, and thankfully most have died or failed before passing into law.

Last week, governor Greg Abbott signed into law HB 25, making Texas the tenth state to pass anti-trans sports bans in the US. The reviled anti-trans legislation requires student-athletes who compete in interscholastic competitions to play on sports teams that correspond with the sex listed on their birth certificate received at or near the time of their birth. This will apply to students playing on K-12 school sports teams in Texas when it takes effect on 18 January.

The passing of the hateful legislation was a bittersweet moment, Hillary Moore-Embry told PinkNews. Their family has lived in Texas for six generations, and they are proud to be part of the fabric of their local area.

But Hillary said they “expected” HB 25 would go into law “once it passed the House” earlier this month. They explained they “didn’t miss” a hearing in the House because “the House was where we could stop it and where we had the most allies”.

“We had some really great Democratic lawmakers that worked really hard to stop it any way they could,” Hillary said. “They just couldn’t anymore. They ran out of tricks.”

They said it “wasn’t a huge shock” that the bill eventually passed the Senate or was signed by Abbott. But it was still heartbreaking to see, they admitted.

They said that “being in limbo” about whether the bill would pass was “really stressful” as Texas legislators drew the debates over “three special sessions plus the regular session”. So now, they said it was almost a relief to be able to “step away from obsessively watching” and “monitoring what’s going on in the legislature for at least a little bit”.

Even though their son doesn’t play sports, Hillary said the attacks against the trans community has taken a heavy toll on their family, and they are actively moving home to Colorado in the new year.

They told PinkNews that other parents wanted to “stay and fight”, but they are tired and want to look after their kid in a safer environment.

Hillary said they plan to stay for the holidays to “give our families one last Christmas together” which was exciting. After that, that’s when their family will start actively looking for new jobs and starting the move to Colorado.

But they said moving home won’t be the end of their fight for trans rights as they know there are “lawmakers there who would love to pass legislation like this”.

They told PinkNews it’s hurtful to see people dismiss the anti-trans law in Texas as a problem for that state or simply claim they shouldn’t expect any different because “Texas is s**t”.

“But they don’t understand if we don’t win this, this is going to have a huge impact elsewhere because there are other people in other states that are going to think, ‘Texas can do it, we can do it – what were the arguments that they used to pass it? What were the ways that they did what they did? What was the wording in the bill’,” Hillary explained.

They continued: “This bill is not the end. They will come after trans people in other ways. This is just a foot in the door.”

Hillary told PinkNews that they are “really looking for the positives” with their life-changing move. When they visited the area that they’re looking to move to, they said it was a “relief” that they say “people were wearing masks” and that “seemed to be the norm”.

“People call it virtue signalling, and I don’t care,” Hillary shared. “If you’re showing me that you care about my health, virtue signal away – that makes me feel like you’re a good person.”