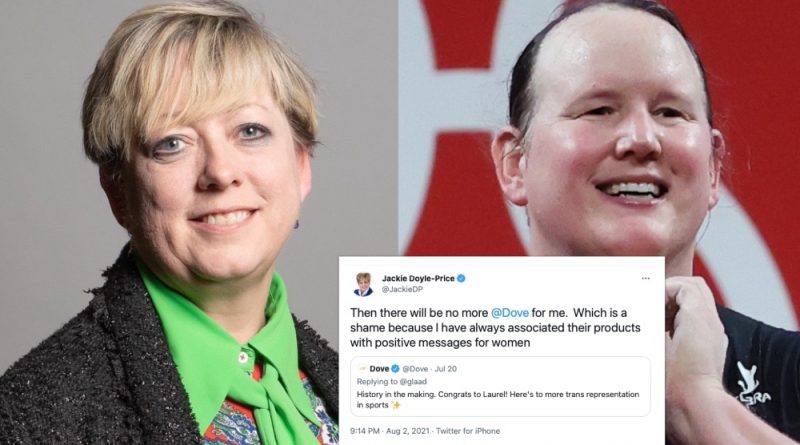 The first openly trans woman to compete in the Olympics, Laurel Hubbard dropped out of Tokyo this week (August 2) after failing to lift 125kg in the +87kg women’s weightlifting.

Her dreams of Olympic glory may have been dashed, but her journey is one of sporting history – and to trans and non-binary weightlifters, her Olympic bid was a “vindicating and monumental” moment, they told PinkNews.

But when Dove tweeted its support for Hubbard and trans athletes, Doyle-Price, who has repeatedly pledged her support for the anti-trans pressure group LGB Alliance, was anything but pleased.

“History in the making,” Dove’s Twitter account tweeted in July. “Congrats to Laurel! Here’s to more trans representation in sports.”

“There will be no more Dove for me,” Doyle-Price, the decade-long MP for Thurrock, tweeted Monday evening (2 August).

Then there will be no more @Dove for me. Which is a shame because I have always associated their products with positive messages for women https://t.co/nquUlnD58B

“Which is a shame because I have always associated their products with positive messages for women.”

It remains unknown, however, if she also plans to boycott the more than 400 brands that global conglomerate Unilever owns alongside Dove, from Ben & Jerry’s to Marmite, PG Tips to Comfort.

Twitter users also expressed their bemusement at how a “politician paid by the taxpayer” has announced that they, well, no longer use soap. Others, meanwhile, counted themselves among Dove’s new loyal customers.

If someone worked for a private company said this they would probably lose their job or have their reputation ruined so why should this be allowed?

Politicians HAVE to be held accountable, very simple. https://t.co/bkGdKmVY4z

Excellent I use Dove and knowing it won’t be sharing it with bigots makes me smile. https://t.co/sIEBrlvqz3

You know, if a bunch of brands and organizations that you’ve always associated with supporting women are supporting trans women, maybe that should indicate something to you. Maybe ponder on that for a while? https://t.co/qKFHgohlDV

Lmao transphobes are boycotting soap this is me crying on the floor 😭 can you boycott the planet and leave ? We’re living on the same earth lmao, more space for us you know ? https://t.co/KJ1hxKEgZk

Says an MP who voted against equal marriage. https://t.co/lZsKTGFav4

Jackie Doyle-Price’s track record on LGBT+ rights is anything but squeaky-clean.

Last year, she sought to defend voting against marriage equality by saying she “doesn’t support the state interfering with religious sacraments“.

And to mark International Women’s Day that year, the former health minister even called for legislators to “devise a law” to ban trans women out of single-sex spaces.

She has also called the trans rights movement “regressive” and said it was “madness“.

PinkNews has contacted Jackie Doyle-Price and Unilever for comment.