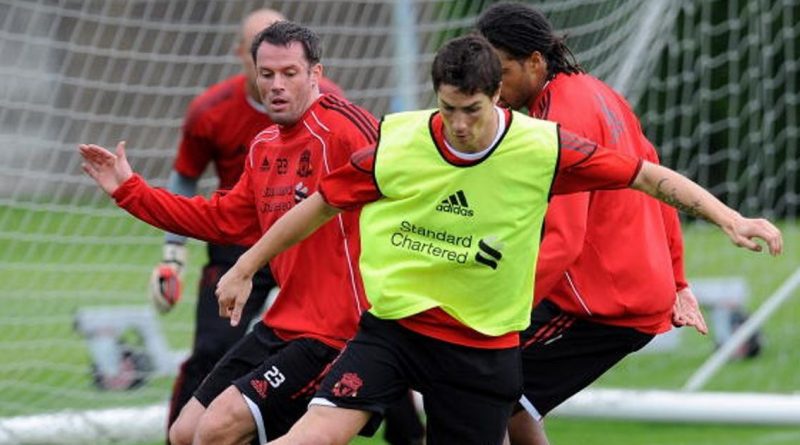 
Jamie Carragher played with Fernando Torres during the Spaniard’s prime years at Liverpool, but the former striker was always looking out for his younger team-mates it seems

Jamie Carragher has revealed Fernando Torres’ X-rated reaction after he two-footed a younger Liverpool player who had left him red-faced during training.

Anfield legend Carragher played with Spanish striker Torres when he was at the peak of his powers at the Reds.

Torres scored 81 goals in three and a half seasons in all competitions during his time at Liverpool, before going on to a less successful spell at Chelsea.

And despite being one of the best players in the Premier League during his pomp, it seems the former Atletico Madrid man was always looking out for his younger team-mates.

Former tough-tackling defender Carragher has revealed a story where he got his own back on youngster Nathan Eccleston, who had earlier had a cheeky joke at his senior colleague’s expense.

Speaking on former boxer Tony Bellew’s podcast, Carragher recalled: “We were doing the boxes when someone is in the middle, and when you’re one of the older players you’re telling a young lad to get in if it’s between the two of you.

“And he had a little pipe back, and all the lads went ‘wheeyy’, and started laughing.

Was Carragher’s challenge out of line? Let us know your thoughts in the comments down below

In the training game, Carragher and Eccleston were placed on separate teams as the former began to plot his revenge on the latter, before he seemed to get a firm telling off from Torres.

“I’ve thought, I don’t want to go looking for him, I’ve got to wait to make sure I get him, because if I do something and don’t get him then I’ll look stupid,” he continued.

“So there was about 10 minutes to go in this game and the ball’s got played down the line. Normally I’d come across and cover it, but I thought, ‘I’ll let him go’.

“So I’m then behind him and he’s running towards the corner flag, and I’ve just jumped two foot into the back of his achilles.

“And Torres went ‘what the f***’s going on?’ He was like a lunatic, and the game just stopped.”

Despite the nasty challenge, Carragher admits that having got off scot-free, he completed his mission.

“I was at that stage when no one could really say anything to me too much, even the manager, I was a bit like, ‘I don’t give a f***’,” he added.

“He won’t say that again will he?”