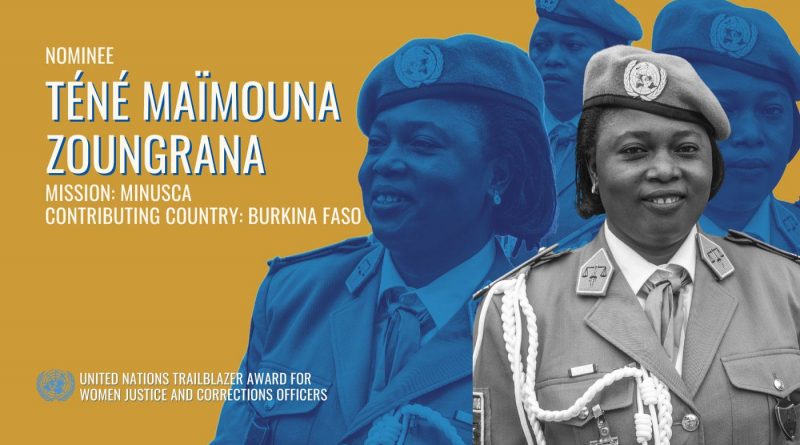 
Téné Maïmouna Zoungrana, of Burkina Faso, serves with the UN Mission in CAR, MINUSCA. She received the United Nations Trailblazer Award for Women Justice and Corrections Officers at a special ceremony, at UN Headquarters in New York.

Ms. Zoungrana, first deployed to the Multidimensional Integrated Stabilization Mission in the Central African Republic, between 2014 and 2017 and began her current tour with the mission, in 2020.

She supports one of MINUSCA’s most difficult tasks – the demilitarization of the prison system in CAR, said UN Peacekeeping, in a press release announcing the award.

She also leads and coordinates rapid-intervention and riot-control activities at the all-male Ngaragba Central Prison in Bangui, the largest and most volatile prison in CAR with a population of detainees classified as high-risk. It has some 1,335 inmates, accounting for just under 70 per cent of the entire prison population of the country.

With her vast technical expertise in crisis intervention, Ms. Zoungrana has mentored many UN colleagues and national prison staff, and created a women-only rapid intervention team.

“Prison security has long been characterized by stereotypes that have hindered the development of women prison administrators”, Ms. Zoungrana said, after being told about her selection for the new award.

“I am very pleased that today opportunities are given to women to work in prisons, and to perform all roles without distinction, and I feel empowered,” said Téné Maïmouna Zoungrana as she was notified of the award.

Last month, the newly minted award winner spoke to UN News in a special profile on her pioneering work, noting that women are “often placed second or even ignored”, when they work as corrections officers.

Among her achievements, she integrated rapid intervention training into the national policies for prisons and detention centres, and helped improve the effectiveness and accountability of CAR penitentiary institutions, leading to a significant reduction in the number of escapes at the prison.

Executive Director of UN Women, Ms. Bahous, noted that we face “intersecting global threats to peace, justice and gender equality and growing pushback that threatens years of progress, it is more crucial than ever that the UN reflects its core values of fairness and equality. This starts with ensuring that more women have access to leadership and decision-making roles”.

The UN Trailblazer Award was established in 2022 by the Justice and Corrections Service in Office of Rule of Law and Security Institutions, part of the Department of Peace Operations.

It aims to showcase outstanding women justice and corrections officers who have broken through gender barriers in difficult and dangerous contexts and proven that women are a crucial part of every peace operation’s mandate to create sustainable peace.