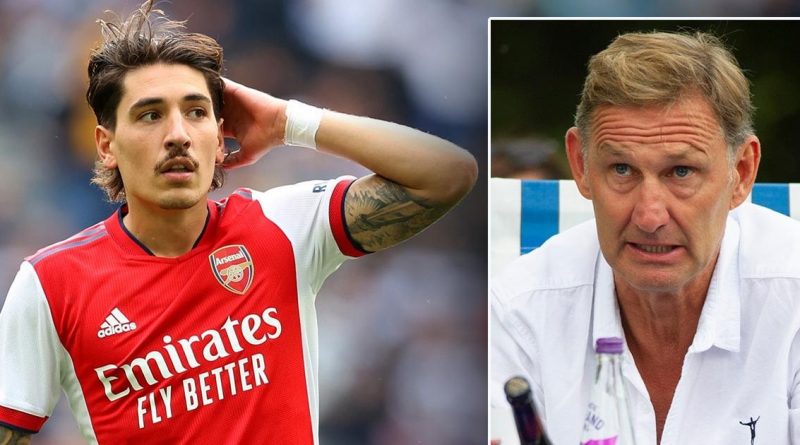 
Bellerin is set to leave Arsenal to join Real Betis on a season-long loan and Adams has taken aim at the Gunners’ recruitment strategy, identifying who should be next to leave Mikel Arteta’s squad

Tony Adams has already identified the next player Arsenal should sell after Hector Bellerin.

Bellerin has been linked with a move away all summer and is closing in on a loan move to Real Betis.

Gunners legend Adams has took aim at the club’s transfer policy following a dismal start to the new season which has seen them lose all three of their Premier League matches.

Mikel Arteta has been backed with £140million worth of incomings this summer as he bids to reshape Arsenal and qualify for European competition again following the 8th-place top-flight finish last term.

Adams believes letting Bellerin go could be beneficial if the Gunners had found a replacement at right-back, having been tagged with interest in Kieran Trippier this summer.

Bellerin is set to join Real Betis on loan
(

“If you’re bringing players in who are a lesser standard, you don’t get someone that’s less than what you’ve got,” he told Stadium Astro.

“Cedric, is he better than Bellerin? Have you made an improvement there? Take it or leave it.”

Cedric Soares has spent most of his time in North London operating as a utility man while Callum Chambers is an option at right-back.

Adams also believes selling Cedric to fund a “good” alternative is a better option, with Arteta also set to bring in Bologna defender Takehiro Tomiyasu for £19.8million, who can play in the role but is more suited to a central position like £50m summer signing Ben White.

“Or are you telling me we need two? Get rid of two and get a good one! That would be the opinion that I would have,” the 54-year-old said.

“You always bring in players better than the ones you have got or don’t bring them to the club.”

Ainsley Maitland-Niles can also play at right-back but has made headlines following an Instagram post where the 24-year-old pleaded to leave on loan as Everton were linked.

He will now remain part of Arteta’s squad, despite limited game time.

Arsenal were on the end of a 5-0 drubbing at the hands of Manchester City on Saturday as their injured and illness-ravaged squad continued their losing streak.

The Gunners came under heavy criticism but Arteta’s former boss, Pep Guardiola, took pity on the side.

“The squad today is not the team like he dreamed because they have six, seven, eight injured,” he said.

“He cannot use the players he needs to do it. All the managers need the squad, depth of the squad. All our players except Kevin [de Bruyne] and Phil [Foden], they are completely fit.

“I absolutely am a big fan of him, and I’m pretty sure if they trust him, they are going to do a good job at Arsenal.”