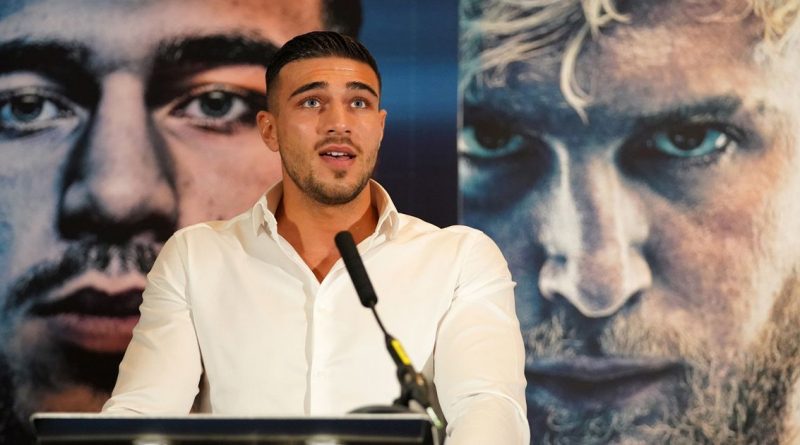 
Tommy Fury has issued a scathing response to Jake Paul after ‘The Problem Child’ took a jibe at his girlfriend Molly-Mae Hague, promising to “break every bone” in Paul’s face

Tommy Fury has warned Jake Paul that he will “break every bone” in his face after the American took a jibe at his girlfriend, Molly-Mae Hague.

Fury will make his American boxing debut against MMA fighter Anthony ‘Pretty Boy’ Taylor on the undercard of Paul’s fight with Tyron Woodley on August 29.

In May, Paul took a dig at Fury when he shared a post that appeared to show Hague direct messaging him on Instagram.

“Oh, and one last thing Tommy. You should be more worried about your girl sliding into a bunch of dude’s DMs than you should be fighting me,” Paul said.

Fury isn’t convinced Paul will take a fight with him, especially if he defeats his sparring partner Taylor in convincing fashion later this month.

“I’m thick-skinned. I’m a professional athlete. These boys ain’t. These boys play games on the internet and run around for a living. I fight hard for a living. I will let my fists do the talking. For every bad thing he has said, he will get a swift right hand for it,” Fury said.

“I will break every bone in his face. You don’t bring people’s loved ones into it. It’s a fight. It’s nothing to do with them, leave them out of it.”

“If I bomb his sparring partner out? The one who he has been having 50-50 [sparring sessions] with in the gym for six weeks? If I bomb him out in 20 seconds? I don’t know what he will do.”

Paul will look for his fourth win as a professional against the former UFC welterweight champion Woodley on August 29.

Who would win in a fight between Fury and Paul? Comment below

And of a fight with Paul, Fury said: “He can either run with his tail between his legs or step up like a man and test himself.

“They are doing it to build the fight. I’m here and I want the fight. I will take it in a heartbeat. The ball is in his court. It always has been. He’s the one who controls everything. It’s either yay or nay.

“I’m over the talking. Let’s get it on. Let’s put it to bed. Enough social media chat, which he loves. Let’s get in the ring and fight. Stop making excuses, and make the fight next!”

Elsewhere on the August 29 card, Daniel Dubois will look for his second win on the bounce when he fights Joe Cusumano. WBC, WBO, and IBO female featherweight champion Amanda “Real Deal” Serrano will also defend her titles against Yamileth Mercado.