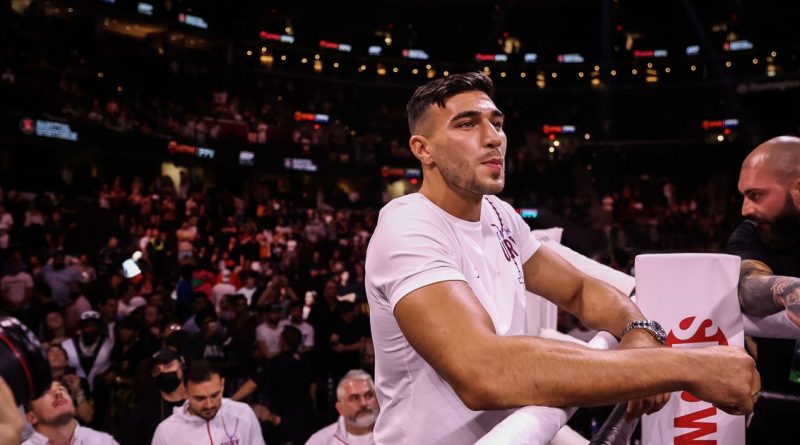 
Fury was reportedly told to “stay out” of the ring by Logan Paul after his brother defeated Woodley in the main-event in Cleveland, despite a heated confrontation in the hallway afterwards

Tommy Fury has revealed he was told to “stay out” of the ring by Logan Paul, after his brother Jake defeated Tyron Woodley on Sunday night.

Paul defeated Woodley via split-decision in a fight that he dominated for large periods to maintain his unbeaten record.

And Fury himself recorded victory on the undercard to the main event, defeating Paul’s sparring partner Anthony Taylor in a four-round contest, before approaching Paul after the fight.

But the YouTube star’s brother Logan stopped Fury from entering the ring with a “stay out” warning, despite the pair being linked in his next fight.

“It just transpired about ten minutes ago,” Fury told reporters at the post-fight press conference. “I was doing an interview and his whole team landed.

“Jake Paul’s squaring up to me, the whole thing but he’s seen me at ringside leaning over the ropes waiting to get in there and there’s Logan saying, ‘not right now’.

“They ain’t fighters, I’ve said this from word one, if you want the fight I’m here and I’m ready to go, no running and no playing and it’s fine if you don’t want the fight just say it.

“I want the fight, and if you don’t, that’s fine just say it and I can go my way and you go yours, but stop using my name.

“I’ve done my part, he did his part. Why not make the fight next? It’s on the tip of everyone’s tongues.”

The British light-heavyweight had wanted a stoppage against Taylor to cement his chances of a shot at Paul.

“The guy had nothing to say, he had a mediocre performance against my sparring partner,” Paul also said at the post-fight press conference. “Tommy Fury is supposed to be this tough bad guy with a legendary bloodline and I got in his face and let him talk.

“I hired him to be here and gave him a chance to shine. Will we see that fight? I will run that s*** easy, it’s an easier fight than Tyron in my opinion.”

“I’ve been boxing for 18 months, I haven’t been to the dentist, my teeth are crooked, my nose is crooked. I need to take some time. I’m only 24-years-old, I need to find out who I am, I’m changing a lot.”

Paul has offered his opponent Woodley an opportunity at a rematch however, providing the term that he must get the tattoo inked on his body from their “bet”.

And the scorecards have been released after the contest, with one in favour of Woodley which has generated controversy.

The stats showed that the undefeated YouTuber was much more effective in the fight, having landed the much more significant shots and on a more regular basis.