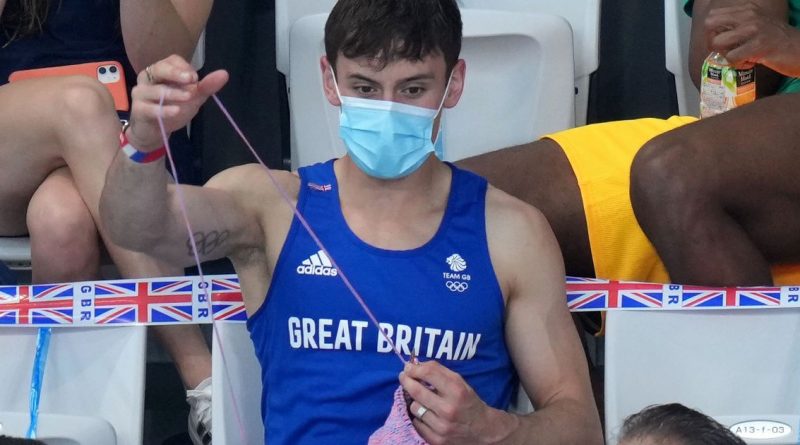 The diver finally reached the pinnacle of his sport when he won the men’s synchronised 10m platform alongside partner Matty Lee on Monday.

In the wake of his triumph, the 27-year-old’s hobby was brought to the forefront and fans absolutely loved it.

One tweeted: “Tom Daley knitting during the women’s final is absolutely sending me.”

While another wrote: “omg Tom Daley knitting in the audience of W diving. absolute icon.”

Tom will compete on Friday in the individual 10m platform event
(

Even Team GB’s official account weighed in and tweeted: “Nothing to see here – just @TomDaley1994 having a knit at the diving.”

After winning the gold medal, Daley took to his Made With Love By Tom Daley Instagram account to show his fans the pouch he knotted for his gold medal.

In a clip he uploaded to the account on Tuesday, Daley said: “I don’t normally post things that are not necessarily knitting related on my ‘Made With Love’ page, but myself and Matty, my synchro partner, won the Olympics yesterday.

“I thought I would come on here to just say the one thing that has kept me sane through this whole process is my love for knitting and crocheting and stitching.”

He captioned the post: “Learning to knit and crochet has helped me so much through these Olympics and we won GOLD yesterday. I made a little medal case too!”

Daley wept tears of joy today after winning his first ever Olympic Gold.

He and Lee produced a stunning display to beat hot favourites China with a series of sensational dives in the 10m synchronised diving.

“I feel incredibly proud to say that I am a gay man and also an Olympic champion,” the four-time Olympian said from the podium.

“And I feel very empowered by that because when I was younger, I thought I was never going to be anything or achieve anything because of who I was, and to be an Olympic champion now just shows that you can achieve anything.”

The Brit will be in action once again on Friday when he competes in the individual 10m platform event.