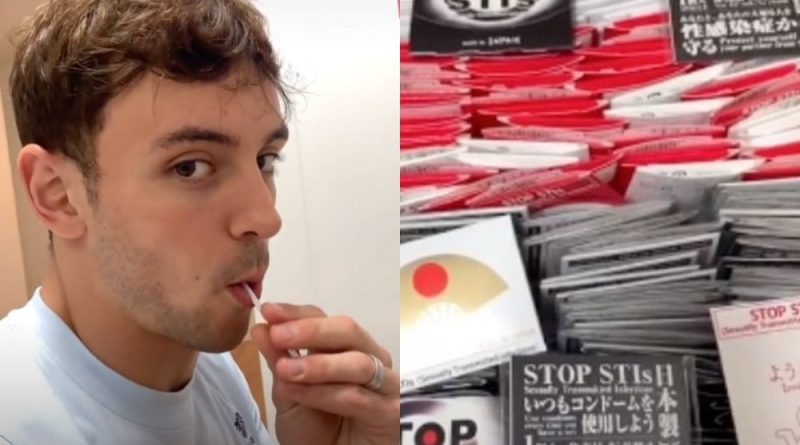 Tom Daley is living his best post-gold medal life by unboxing dozens of condoms to the tune of Lil Nas X’s “Industry Baby“.

Daley, 27, and fellow British diver Noah Williams, 21, revealed in a viral TikTok video just how many condoms athletes at the Olympic Games are gifted by the organisers. And it’s seriously a lot.

In the TikTok video, Daley sucks on a lollipop while Williams unsheathes a family-size pack of rubbers, which came with a lengthy warning about not actually using them in the athletes’ village.

You know, because of that little thing called the coronavirus pandemic.

As Daley continues to enjoy his lollipop, Willams shows how many condoms have been rammed in the box while Lil Nas X’s “Industry Baby” blasts in the background.

“Not me minding my own business with a lollipop,” Daley commented on Williams’ video, which has been viewed more than four million times.

The pair will be getting wet together pretty soon, though. They’re both set to compete in the individual 10-metre platform preliminary Friday (6 August).

Since the 1980s, the organisers of the Olympics have sent athletes thousands of condoms so they can safely hook up with one another. For Tokyo, that figure sits comfortably at 160,000.

But because of the pandemic, which forced organisers to delay the Games by 12 months, organisers had to issue stern warnings against athletes actually using them.

The condoms should be brought back home as a souvenir and used to raise awareness of HIV, organisers have said, warning no canoodling of any kind should take place, as it goes against the social distancing guidelines firmly laid out in the Olympics rulebook.

Athletes technically can’t even handshake or high-five outside of their Olympic bubbles.

If found to do so, athletes face being fined, disqualified or even lose their medals.