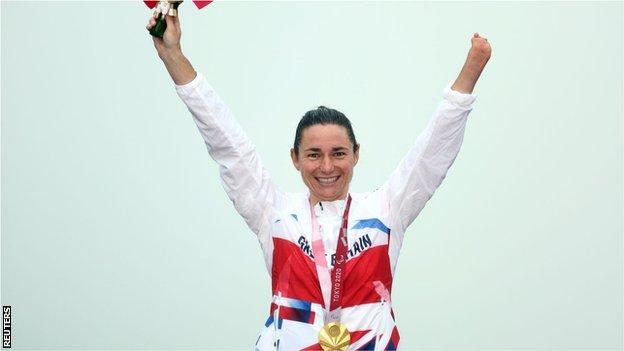 The 43-year-old defended the women’s C4-5 road race title she has held since London 2012 to put her one gold ahead of previous record holder Mike Kenny.

It was a GB one-two in the men’s C1-3 race too, Ben Watson winning his second gold with Fin Graham claiming silver in atrocious conditions in Tokyo.

“I’m a bit overwhelmed, I feel like it’s happening to someone else,” Storey told Channel 4.

“I can’t really explain or compute anything about the race, but crossing the line first felt so good.”

Storey’s gold was her third of this Paralympics, which is her eighth Games since making her debut in Barcelona in 1992 as a swimmer.

She won the individual pursuit on the track before claiming time-trial gold to equal Kenny’s record.

Storey now has 28 Paralympic medals in total and has not won anything except gold since making her cycling Paralympic debut at Beijing 2008.

In weather more akin to her home near Manchester, with rain and thick fog making visibility difficult at the start, Storey was in the front pack from the off, alongside Lane-Wright.

The British pair allowed German Kerstin Brachtendorf to make a breakaway towards the end of the second of the six laps and the 49-year-old clocked a 25-second lead at the checkpoint.

She extended that advantage to more than a minute at the halfway stage, with Storey leading the chasing group and Lane-Wright constantly on her wheel.

As the rain got even heavier they were unable to reel Brachtendorf in, the gap opening up by another 10 seconds after four laps.

But Lane-Wright hit the front of the chasers with a significant injection of pace and her burst made all the difference as the pack quickly caught up with Brachtendorf to leave five riders in contention for the medals at the end of the penultimate lap.

It was at this point that the British duo found another gear, Lane-Wright and Storey breaking away to open up a comfortable lead coming into the finish on the Fuji International Speedway circuit.

Storey punched the air in celebration as she crossed the line in two hours, 21 minutes and 51 seconds.

“I don’t know if it’s sunk in. It’s something everyone has been talking about since Rio when it became a mathematical possibility with me doing three more events in Tokyo,” Storey told BBC Radio 5 Live’s Paralympic Breakfast.

“But you can’t take anything for granted and although I knew I had the capability to shut down the gap to Kerstin, when your legs don’t feel as good as they have done in the time trial and then the individual pursuit, then you think today is not my day.

“I just feel immensely proud and also immensely grateful to have so much support and to have such a great team around me and also a great team back at home. They’re the ones who are able to make this possible, by putting me on the start line in a position to go for it, so I’m a little bit lost for words in many ways.”

‘There are times when I think, ‘what would Sarah do?”

Lane-Wright’s silver was her third in Tokyo, having finished second to Storey in all three races.

The 35-year-old, who has five Paralympic medals in total, hinted this would be her last Games and was very aware of the historic nature of the race.

“I said ‘this is your gold medal’. You don’t have to worry, I’m not even going to attempt to take it away from you,” Lane-Wright said.

“This is part of history now. And I didn’t have the legs, she went so hard. It’s easy for me to now say I gave it to her, but she won that fair and square.

“Gold medals aren’t the only thing that define it, you also have to look at her as a professional. And even if she’d won silver today, she is still one of the greatest athletes we will ever have.

“I’ve piggy-backed on that because I’m in the same category and now on the same podium. There are times when I think, ‘what would Sarah do?’. She inspires me that much.”

Watson claimed victory in the men’s race, for his second Paralympic title in Tokyo, just moments after Storey and Lane-Wright crossed the line in the women’s competition.

Five years ago, during the Rio 2016 Paralympics, Watson was working a desk job as a chartered surveyor. He attended a talent ID day and fast forward to 2021 and he’s a double Paralympic champion, having won the C3 time trial two days previously.

The 32-year-old was up at the front from the start and, alongside Graham and three-time medallist in Tokyo Jaco van Gass, was in the leading group at the halfway stage of the 79.2km race in the shadow of Mount Fuji.

But on the fourth lap Watson made his move, quickly establishing a lead of more than a minute on the rest of the field that he would never relinquish.

On the fifth lap, Graham – silver medallist behind Van Gass in the 3,000m individual pursuit earlier in the Games – broke away from the pack to all but confirm the British one-two, and he crossed the line one minute and 20 seconds behind team-mate Watson.

In a sprint for the finish, France’s Alexandre Leaute took bronze, almost seven minutes after Watson had won, with Van Gass missing out in fifth.

“That was mental,” Watson told Channel 4.

“I complain about the rain but I love racing in this, I adore it.

“When I woke up this morning, I had a smile on my face, it was going to be pretty good.”