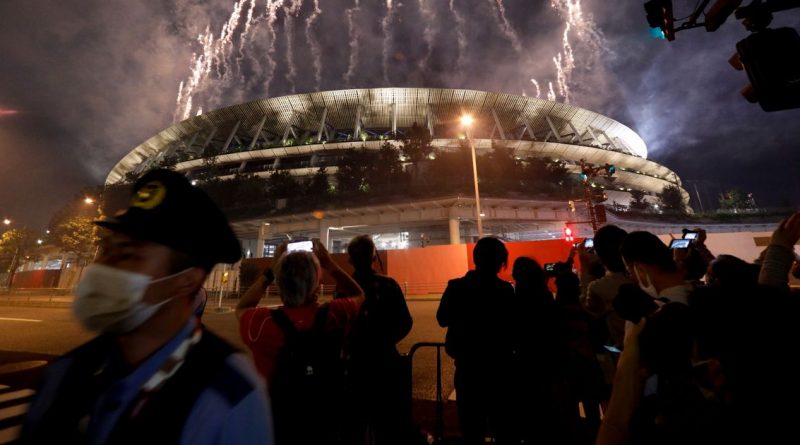 
The final curtain came down on the Tokyo 2021 Paralympics in a closing ceremony that featured techno music, neon-coloured breakdancers and a mesmerising light display

Sarah Storey after becoming the most decorated Paralympian of all time

The Paralympic flame was extinguished once again as spectators bade farewell to Tokyo 2020 on Sunday in a closing ceremony worthy of what was a fantastic summer spectacle.

The global pandemic meant fans were still not in attendance for the send-off at Japan National Stadium, though organisers did a fine job bringing the occasion to viewers at home.

A feast of fireworks ushered in a video montage of the Paralympics’ best moments, with many medal-winners celebrating their highlights from a hectic 12-day competition.

China dominated the final medal table with 96 golds—more than double that of runners-up Great Britain—and 207 overall medals, 83 more than their closest competition.

Boccia gold medallist David Smith called it an “unbelievable honour” to be named Great Britain’s flag-bearer for the closing ceremony having won his fifth Paralympic medal this year.

“I am proud to be the face of the athletes that are here, and those who have already returned home,” Smith said.

“It is an unbelievable honour to be leading out the ParalympicsGB team at the closing ceremony.

“Not only am I representing the sport that I love, but the wider ParalympicsGB team too.

“I have received so much support over these last 12 days, this honour is for every one of them – athletes, support staff and British fans alike.”

David Smith retained his gold medal in the BC1 Boccia event
(

Tokyo seemingly marked the end for two British swimming stars – each named Ellie. On her 20th birthday, two-time medallist Ellie Robinson – ‘the girl in the big coat from Rio’ – received widespread words of consolation and encouragement following an emotional interview in which she revealed her painful hip condition had become too severe to continue.

That news was followed just three days later by five-time gold winner Simmonds effectively calling time on her own Paralympics career. GB’s opening ceremony flagbearer – who, like Robinson, did not make the podium in the Far East – planned to “go home and evaluate.”

Meanwhile, Dame Sarah Storey delivered on the pre-Games hype as she rewrote the record books. The unstoppable cyclist, whose career began as a 14-year-old swimmer at Barcelona in 1992, successfully defended three titles to become Britain’s most successful Paralympian.

The trio of golds moved her on to 17 in total, surpassing the 16 won by swimmer Mike Kenny between 1976 and 1988. The 43-year-old mother-of-two’s quest kickstarted with a world record en route to C5 3000m individual pursuit success on day one.

Her place in history was cemented by time trial and road race triumphs in the space of three days in the foothills of Mount Fuji, with the final win coming in torrential rain.

Japan ended their Games with only 12 gold medals in total, but the hosts nevertheless celebrated the impact the Paralympics has had on the country in another heartfelt video display.

The Paralympic Flame was extinguished as part of Sunday’s ceremony
(

Dancers and musicians of different genres appeared in their dozens, among them the man who holds the world record for most hands-free head-spins in 60 seconds.

Projections were cast across the stadium as BMX riders and dancers decked in neon took to the centre, some holding a sign that read: “Thank you to all the Paralympians.”

Performers eventually stepped to one side as the more official part of proceedings took precedence, with a delegation of Japanese athletes and citizens the first to hoist their national flag.

Performers provided entertainment before the athletes’ parade at the National Stadium
(

Representative teams carried flags into the stadium, taking their turns sticking reflective discs on a miniature Tokyo ‘skytree’, the tallest tower in the world.

Another flash of fireworks and orchestral music played out as the replica tower was pulled skyward, completing a colourful miniature set of the Tokyo skyline.

Team GB’s athletes didn’t quite match their Paralympic medal tally of 147 from Rio 2016, but the performances in Tokyo nonetheless stirred passion and pride across the nation.

The ceremony also paid tribute to Paris, who will take their turn to host the Paralympics in 2024, which fans will be glad is now only three years away, rather than the usual four.

Organisers in France have big shoes to fill in matching the extravaganza Tokyo has laid on over the past fortnight in what will go down as a Paralympics to remember.