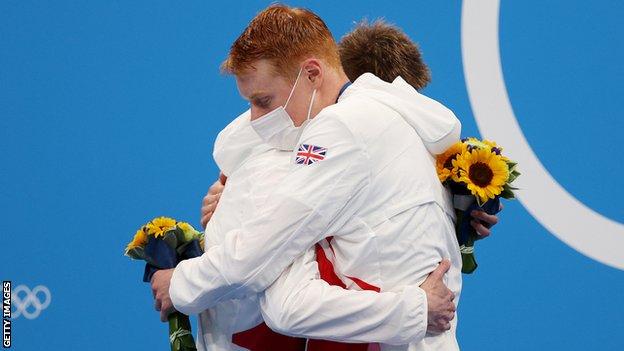 Tom Dean claimed a stunning gold and Duncan Scott silver to ensure a British one-two in a fast, closely-fought 200m freestyle at the Tokyo Olympics.

Dean touched home in one minute 44.22 seconds, securing a British record on his debut Games.

It is the first time since 1908 that two male British swimmers have finished on the Olympic podium together.

The 21-year-old Dean had a difficult build-up to Tokyo after twice contracting coronavirus in 2020, which at one stage left him unable to “walk up the stairs without coughing and wheezing”.

Unable to train for three weeks on each occasion, he told BBC Sport that he suffered a real setback “physically and mentally” prior to the Games.

“The three week build-up back to training had to be structured to prevent any long-term damage to my heart and lungs, so it was scary,” he explained.

“It was upsetting because no-one takes six weeks off in the build-up to an Olympics. It was a real shock to the system.”

Despite the disruption, he arrived at the Games as the second-fastest man in the year, behind Scott.

“When I was sitting in my flat in isolation, an Olympic gold seemed a million miles off,” he said.

“It is a real honour. I watched the flag go up and the anthems be played, it is the stuff of dreams.”

The two Britons high-fived before sharing a hug as their remarkable podium finishes were confirmed.

Both swimmers looked shocked as they spoke to BBC Sport afterwards, with Scott describing it as an “unbelievable moment”.

The Scot was the favourite going into the race but Dean was able to back up his rapid start with a strong finish.

Scott, who won European silver in May, said he was “just buzzing for Deano” as the two good friends allowed their victory to sink in.

The British team – including Adam Peaty, who won a historic 100m breaststroke gold on Monday – cheered the two on from the stands, with several reduced to tears by the emotion of the moment.

“You can’t describe that. When you have worked so hard, to share this medal moment with one of your best friends is an unbelievable feeling,” two-time Olympic gold medallist Rebecca Adlington told BBC TV.

“Duncan will be slightly disappointed because he was the fastest and the favourite but, at the end of the day, you can tell that if anyone were to beat him, he would want it to be his team-mate.”

Scott was quick to praise Dean, with the pair celebrating together on the podium as they received their Olympic medals.

“He has come on so far in the last 18 months and it is a pleasure to watch,” Scott added.

“He is a good mate out of the pool and it is great to be able to compete against him.”

Elsewhere, Britain’s Kathleen Dawson finished sixth in the 100m backstroke, while Freya Anderson missed out on qualifying for the 200m freestyle.

Elsewhere, American Lydia Jacoby was the shock winner in the 100m breaststroke, forcing her team-mate and Rio 2016 champion Lilly King to settle for bronze.

The 17-year-old had to move from Alaska – where there is no Olympic-length pool – to train and benefitted from the Games being delayed by a year to allow her to develop.