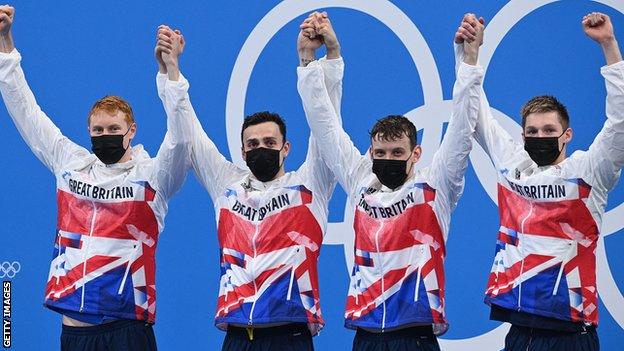 Their Olympic success follows world titles in the event in 2015 and 2017 and is an improvement on the silver the team won at Rio 2016.

Elsewhere, Britain’s rowers won silver in the men’s quadruple sculls, but there was disappointment in the men’s four as a run of golds stretching back over the previous five Olympics ended with a fourth-place finish and some erratic steering over the final 500 metres.

Breaststroke specialist Abbie Wood came within 0.11secs of claiming another British medal in the pool as she was edged out of bronze in the 200m individual medley.

Britain’s victory in the 4x200m freestyle relay was comfortable in the end as they came home more than three seconds clear of the second-placed Russian Olympic Committee team.

However it initially looked as though it might be tighter when Dean, swimming the opening leg, touched third in a split that was a second and a half slower than the time that won him individual gold.

However Britain’s strength in the depth told as Guy, Matthew Richards and Scott, with a 1:43.45 final leg, stretched clear of the rest.

While Guy broke down in tears as he watched Scott anchor the team home, the United States looked on in disbelief as there was no American medal for only the second time in the event’s Olympic history – the other occasion being the Moscow 1980 Games, which the US boycotted.

“As a kid, dreaming of an Olympic gold medal was my dream,” Guy said. “After 25 years to do it finally, it’s very emotional.”

Britain’s quadruple sculls silver was the first time they have won a medal at the discipline since its introduction into the Games in 1976.

The British boat was drawn in unfavoured lane one, but went out hard to put pressure on the rest of the field.

“It was wild out there. The conditions are rough, with a tailwind, but it’s what we’re used to back home so we’ve trained in this so many times, it did not shake us,” said Beaumont.

“We decided that, as we were in lane one with an outside chance of a medal, we were going to take it to them and we really did it.”

Britain has a much longer history of success in the blue-riband men’s four event, with a run of five successive golds stretching back to James Cracknell, Steve Redgrave, Tim Foster and Matthew Pinsent’s victory in Sydney 2000.

The class of 2021 could not add to that streak however. In second position heading into the final 500 metres, Great Britain veered offline, coming close to hitting the Italian boat before finishing in fourth.

“I’m responsible for the steering. I screwed up,” said an emotional Ollie Cook afterwards.

“I forgot the steering a little bit and that cost us a medal. To the lads, I’m sorry I didn’t steer us the best line at the end.”

American Katie Ledecky set a new Olympic record on her way to victory in the 1500m freestyle and a sixth Games gold of her career.

But Ledecky was outshone again by Australian 20-year-old Ariarne Titmus, who added the 200m freestyle title to her 400m freestyle gold on Monday.

Titmus touched home in one minute 53.50secs to become the first Australian to win the event since Susie O’Neill in 2000.

“I’m not going to let it settle in too much – I’m only halfway through my program. It’s crazy to think I still have the relay and the 800m to go. But I have the afternoon off now, so I’ll have a rest, come back in for a light swim and get ready for tomorrow.”

Titmus and Ledecky both compete in the women’s 800m freestyle, with heats starting on Thursday, and are likely to face off again in the women’s 4x200m relay.