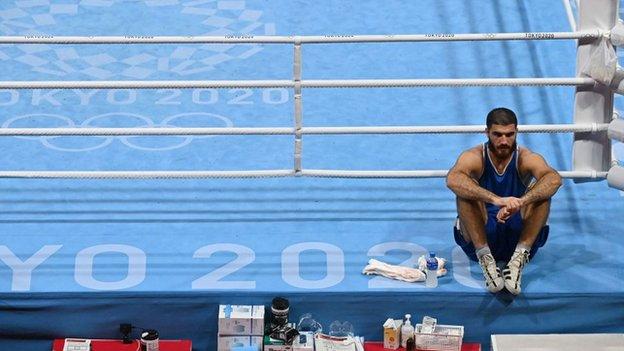 French boxer Mourad Aliev said he staged a remarkable protest after defeat to Frazer Clarke because of the “injustice” of his disqualification.

Aliev spent 30 minutes sat on the ring apron after the fight and left the arena, only to return to the same spot.

“I sat down to protest against the unfairness for me,” said Aliev.

“I prepared for these Games for four years. I really wanted to fight against the injustice, so that was my way to show that I don’t agree with that decision.”

Aliev kicked the canvas and remonstrated angrily upon hearing of his disqualification, behaviour he said was “natural” because he has “prepared my whole life for this event”.

Head clashes had caused cuts above each of Clarke’s eyes and the British boxer – who is now guaranteed a medal – had his cuts checked over twice by a ringside doctor.

Aliev insists he was not warned about his use of his head by the referee, adding: “I was just stopped without any warning and they just told me that ‘you lost’ – just like that. So I think it was an act of sabotage.”

Clarke believes his cuts will not pose a threat to his participation in the semi-finals.

“I’m not going to stand here and say he did it on purpose because I’m sure he wouldn’t have wanted his Olympics to end in the way they have,” Clarke said.

“I told him to calm down because I’ve been in those situations before. The last thing I want him to do is damage his reputation or be rude to the judges and officials, because they are only doing their job.”

The longest known protest in a boxing ring at the Games saw South Korean bantamweight Byun Jong-il sit in the centre of the ring for 67 minutes after losing a bout at the 1988 Olympics, delaying the rest of the competition for more than an hour.