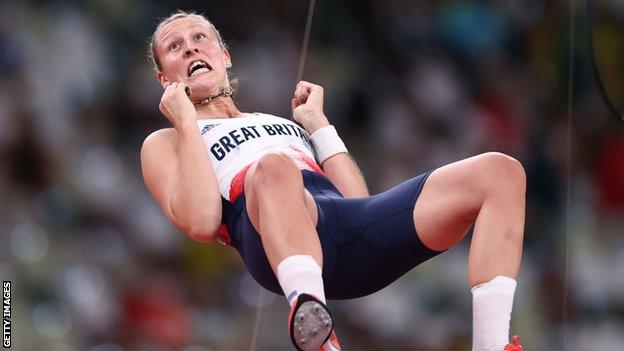 
Team GB moved past 50 medals at the Tokyo Olympics as Matt Walls secured gold in the omnium, while Holly Bradshaw and Liam Heath secured bronze in the pole vault and kayak events respectively.

The trio served up eye-catching moments as Team GB reached 51 medals on day 13 of the Games, equalling the number won at Beijing 2008 with three days of competition to go.

And Great Britain are assured of passing that mark after boxer Galal Yafai shone in winning through a thrilling semi-final to reach the gold-medal match in the 52kg flyweight division.

Dina Asher-Smith made a return to the track as Britain’s 4x100m relay team secured a place in the final, but the relay story was not so positive for the US men’s 4x100m team, who were deemed an “embarrassment” by American sprint legends Carl Lewis and Michael Johnson after being eliminated in their heat.

Walls, 23, improved on the omnium results of Ed Clancy who won bronze in 2012 and Mark Cavendish who took silver in 2016, to win Great Britain’s first track cycling gold of the Games.

BBC Sport’s 1992 Olympic gold medallist Chris Boardman said: “It was a dominant performance from start to finish. He didn’t put a foot wrong anywhere. Tactically and physically he was class.”

Walls, who tested positive for Covid-19 in March, sealed Team GB’s 50th medal in Tokyo and the 16th gold.

“It’s been a hard day but I came into that points race with a bit of a lead and breathing room,” said Walls.

“Thank you to all my family and friends, I wouldn’t be here without them, especially my parents.”

Bradshaw sought to gain around 5kg in muscle during the Covid-19 lockdowns and the performance benefits have been on show in the lead up to the Games.

In claiming bronze she secured Great Britain’s first ever medal in pole vault at an Olympic Games and the first global outdoor medal of her career.

The 29-year-old, who came sixth at London 2012 and fifth at Rio 2016, cleared 4.85m to finish behind Russian athlete Anzhelika Sidorova on 4.85m and American Katie Nageotte on 4.90m in what BBC Radio 5 Live’s Allison Curbishley said was “a phenomenal final”.

Kayaker Heath – the Olympic champion in 2016 – initially looked like he may come up short after a poor start to his final, only to find a surge that earned him a nail-biting photo finish for the bronze medal.

“I was maybe a bit hesitant off the start and didn’t reach my potential in terms of peak speed,” said Heath, who clocked 35.20 seconds behind Hungarian winner Sandor Totka on 35.03.

“I am still happy with the performance.”

On winning another medal, he said: “It is hard to put into words. It is what you work towards to be at your best for these events.”

Heath, who has previously said retirement after the Games was likely, added: “It has been a roller coaster, over such a long period of time in the extended Olympic cycle. So many highs and lows, so many tests and lessons. I am feeling really good, to be honest.”

From factory to fighting for gold

Yafai also found himself lost for words after progressing to the Olympic final, where he will walk away with at least a silver medal.

The Birmingham fighter started at pace against Kazakhstan’s Saken Bibossinov, scoring a standing count in round one before the contest developed into a thrilling back-and-forth affair.

Yafai hugged a visibly distraught Bibossinov as his narrowest of victories was read. He will now face Carlo Paalam of the Philippines in Saturday’s 52kg flyweight final.

Yafai, 28, is a former car factory worker, and said: “I was doing the rubbish, picking up boxes, delivering parts. Just a skivvy job really. But now I’m on the verge of becoming Olympic champion.

And BBC Radio 5 Live boxing analyst Steve Bunce remarked: “He just wouldn’t be denied. We’ll get a gold from him on Saturday.”

Elsewhere on Thursday, heptathlete Katarina Johnson-Thompson said she would be taking time to “heal my body and spirit” after injury forced her out of the Games.

Big-name injuries have blighted Britain’s medal hunt on the track, including Asher-Smith, who withdrew from the 200m because of a hamstring complaint but chose to compete in the 4x100m relay on Thursday.

“There was never any doubt in my mind that I’d be lining up here today because the relay’s really important, we got a bronze medal in Rio,” Asher-Smith told BBC Sport.

But Team USA’s efforts in the men’s really were not enough as they finished sixth in a heat featuring some poor baton exchanges.

“Trying to get two people running full speed to exchange a baton within a 20m zone requires practice! Especially when you haven’t won this event since Sydney 2000 due to drops and zone violations!Embarrassing and ridiculous.”

Nine-time Olympic gold medallist Carl Lewis added: “The USA team did everything wrong in the men’s relay. The passing system is wrong, athletes running the wrong legs, and it was clear that there was no leadership. It was a total embarrassment, and completely unacceptable.”

What else happened on day 13?