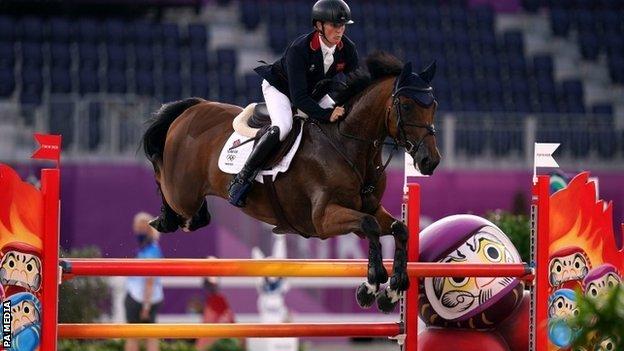 
Great Britain won Olympic team eventing gold for the first time in 49 years and Tom McEwen added a silver in the individual category.

They claimed the gold ahead of Australia while France took bronze.

McEwen took silver in the individual competition on Toledo De Kerser after a faultless display followed his earlier clear rounds in the team showjumping and cross-country stages.

“My nerves were fine,” said McEwen, 30, whose stables are on the the Princess Royal’s Gatcombe estate in Gloucestershire.

“They [Townend and Collett] are both brilliant riders, and I had no doubt they would pull it straight out of the bag quite easily and comfortably.”

Despite all three this time making their Olympic debuts, GB held a huge lead of 17.9 penalties after impressive rounds in Sunday’s cross-country phase, and they comfortably retained top spot.

Victory sealed a remarkable return for Collett who nearly died in a fall eight years ago and spent six days in a coma.

She suffered a punctured lung, spine, shoulder and rib fractures, and lost much of her vision in one eye.

Two years after her accident, Collett had to deal with unfounded malicious rumours about the two-time Cheltenham Gold Cup winner Kauto Star, who was being trained at her yard for a dressage career but died in a freak accident.

“I know I am lucky just to be alive, let alone doing the job I love and winning an Olympic medal,” the 31-year-old told BBC Sport.

“Just to be here was more than a dream come true.”

Collett said her horse London 52 – who is nicknamed ‘Dan’ at his stables near Cheltenham – was spooked by the reflection from water when they made a mistake.

“He got it back together. It’s a shame, but it could have been a whole lot worse in that situation. It was a very clever course,” she added.

Townend adds Olympic gold to a glittering CV which includes victories at the major Badminton, Burghley and Kentucky events.

“The other guys have made it so easy for me – they are such brilliant riders,” said the 39-year-old, who is based in Shropshire.

“There will be a big celebration and I don’t think it will be with a cup of tea and a biscuit.”

That was a third equestrian medal in Tokyo for Team GB following Charlotte Dujardin, Carl Hester and Charlotte Fry winning dressage team bronze, and Dujardin also collecting an individual bronze. McEwen then made it four with his silver.