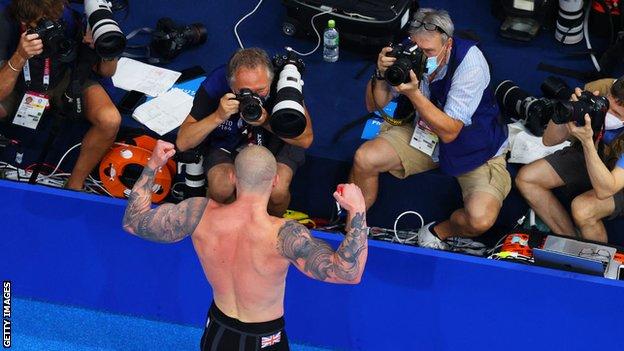 Adam Peaty wrote his name into the history books once again as he powered to 100m breaststroke gold in Tokyo to become the first British swimmer to defend an Olympic title.

The world record holder blew away the competition to win Britain’s first gold medal of the Games.

From start to finish it was a perfectly executed swim by Peaty as he finished in a time of 57.37 seconds, six tenths clear of the field.

Netherlands’ Arno Kamminga, the only man other than Peaty to ever go under 58 seconds, took the silver medal while the bronze medal went to Nicolo Martinenghi of Italy. GB’s James Wilby finished fifth.

With victory confirmed, Peaty slapped the water and shouted “come on” as he once again left his rivals wondering what it will take to beat him.

“When it comes down to it I am not racing for a time, I am racing myself.

“I want to say thank you to my family, my gorgeous partner and gorgeous son. This victory wasn’t mine, it was the British team’s and my family and friends’. I am just so relieved.”

Victory in Tokyo largely seemed inevitable for Peaty given no-one has come close to him in recent years.

He has not lost over this distance in more than seven years and, in addition to his gold in Rio five years ago, Peaty has won the 100m breaststroke at the last three World Championships, has broken the world record five times and is the only man to have ever swam it in under 57 seconds.

With this title secured, Peaty will have the chance to add further medals to his haul when he competes in the men’s 4x100m medley relay and, potentially, the mixed 4x100m medley relay, with the heats for those getting under way later this week.

More history made, sporting immortality next?

Rewriting history is nothing new for Peaty, and from his perspective this latest success will simply be another step on the path towards sporting immortality.

In December last year, Peaty spoke about his ambition of achieving Project Immortal – a theoretical swim he described so good as to be almost inhuman and one that will never be beaten.

This was not that swim. Despite his dominance, it was not the fastest time he has managed before, but everything points towards that being achieved one day, especially given that Peaty appears to have got stronger despite life changing for him away from the pool.

There has, of course, been the coronavirus pandemic that resulted in this Olympics being delayed a year, but rather than viewing a year of lockdowns as a wasted year in his career, Peaty instead believes it has only helped him to find a new level.

Peaty also became a dad in 2020, something he believes has made him more mature and given him a new perspective on life.

“It has given him more motivation – not that he needed it anyway,” double Olympic gold-medal winning swimmer Rebecca Adlington told BBC Sport. “He seems in a happy place and more relaxed and confident.

“He is just phenomenal. We aren’t going to see many Adam Peatys in my lifetime.”

Scott and Dean into the final

Peaty was not the only Briton in the pool on Monday as compatriots Duncan Scott and Tom Dean both progressed to the men’s 200m freestyle final. Scott finished fastest in the semi-final with a time of 1:44.60, while Dean was fourth.

Kathleen Dawson produced a strong swim to finish third in her 100m backstroke semi-final and progress to the final as fifth fastest but Cassie Wild finished 14th. Sarah Vasey just missed out on a place in the women’s 100m breaststroke final.

World record holder Ledecky went out quickest but world champion Titmus paced her race better to win by more than half a second.

Canada’s Margaret MacNeil won Canada’s first gold medal of the Games in the women’s 100m butterfly, finishing in a time of 55.59 secs.

In the men’s 4x100m freestyle relay final, the USA won gold ahead of Italy, with Australia third.