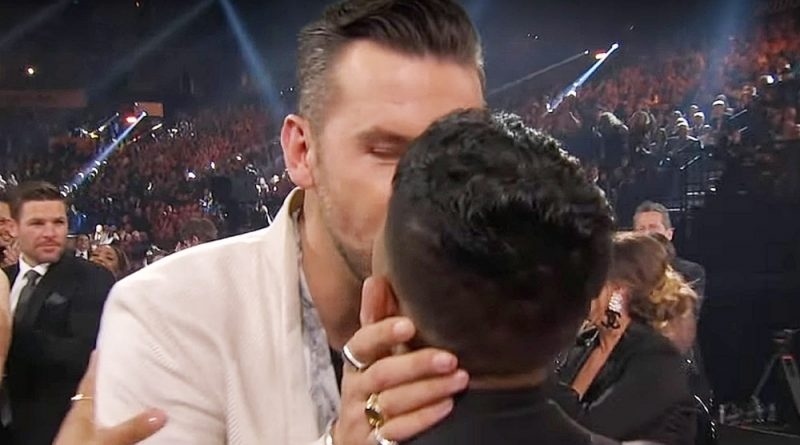 Nine months after courageously coming out as gay, country star TJ Osborne kissed his boyfriend as he won big at the Country Music Association Awards.

In their first public outing as a couple, the Brothers Osborne lead vocalist, 36, shared a smooch with Abiezer Ventura.

The “It Ain’t My Fault” hitmakers from Deale, Maryland, celebrated after picking up the prize for vocal duo of the year at the 2021 CMA Awards Wednesday (10 November).

Brother and fellow bandmate John Osborne, 39, also kissed his wife Lucie Silvas before the duo made their way to the stage.

It was a massive milestone for TJ, who publicly came out as gay in February.

“It’s been a crazy roller coaster of a year for us in so many ways, especially for me emotionally,” TJ said as he accepted his prize.

“And to have you all support me, it really does feel like love wins tonight. Thank you.”

As TJ left the stage to a standing ovation, John jumped in to praise TJ even further. “Give this boy a round of applause,” he said.

“We love this genre, we love the people, we love all of you so much.”

Later that night, Brothers Osborne took the stage to sing “Younger Me”, a song from their CMA Award-nominated Skeletons album.

TJ said he penned the song about his experience coming to terms with his sexuality.

“This is an important message that I wish I could tell my younger self,” TJ told the Associated Press.

“The fact that we get to play a song that is so meaningful, particularly to myself, at a country music award show, it’s one of those things that just kind of transcends the awards itself, money itself, fame.”

He added: “The biggest thing that bothered me was not that I was being recognised but it kind of gave the message that maybe people that are gay or LGBTQ aren’t really that accepted in this state.

“While that may be true in certain areas of our stage, I don’t feel like it is in Nashville. It’s a very accepting city here.”

TJ publicly came out in an interview with Time magazine, saying he has been open to his family and friends but wanted to share his truth with the world.

“I find myself being guarded for not wanting to talk about something that I personally don’t have a problem with,” he said. “That feels so strange.”