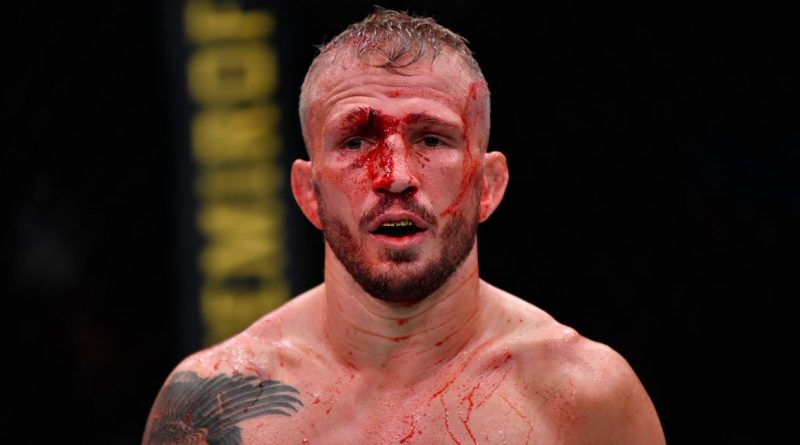 Controversial former bantamweight champion Dillashaw eeked out a razor-close decision win over top contender Cory Sandhagen last night, and took to the microphone to pay tribute to Diaz after the bout.

Dillashaw was asked in the post-fight press conference how he had game-planned for an opponent of the calibre of Sandhagen, who would have almost certainly earned a title fight against the winner of Petr Yan v Aljimain Sterling 2 with a win.

And he quoted the infamous pre-fight interview from when Diaz arrived at the Las Vegas airport ahead of his late notice fight with Conor McGregor, saying he wanted to “come home with a pocketful of cash”.

“I would like to quote the great Nate Diaz here,” Dillashaw said. “Get in there, hit him with some good s***, do not get hit, and come home a pocketful of cash.”

He continued to explain that he felt Sandhagen wasn’t a great counter-fighter, and says he used that knowledge to his advantage when he earned a tight split decision victory.

“You know, Coy is not like a guy who’s going to counter you,” Dillashaw explained.

“Once you get him on his bike, he starts back-pedaling, and then you can do what you want with him.

“Chop his legs up, take him down but I couldn’t use that as much as I wanted to.

“I was able to do it in the first round but I got lazy and hurt my knee so it took a lot of my game plan out of the window.”

The pair were initially supposed to share the octagon on May 8, but when Dillashaw suffered a gnarly cut in training, the bout was cancelled.

And he admitted after the bout that he had opened up another cut during training for the rescheduled date, hiding a heavy gash behind large sunglasses while speaking to reporters.

He also picked up a series of injuries that could have seen him pull out again, but said he refused to waste any more time after serving a two-year suspension for testing positive for the use of EPO ahead of his last outing in January 2019.

“The first camp going, we were supposed to go May 8, it went smooth other than getting cut – I was able to spar, my cut was going good.

“The second camp around, I could not stay healthy.

“The first injury was that I pinched this nerve in my foot doing a slider board, and up until two days ago, I had to work out with shoes on,

“This is like the worst thing I could’ve been dealing with., but then I tore my MCL in my right knee.

“I hurt my left shoulder, as well, the whole camp. It was a real rough camp.

“It had been too f***ing long. There was no way I was going to pull out from the fight.”