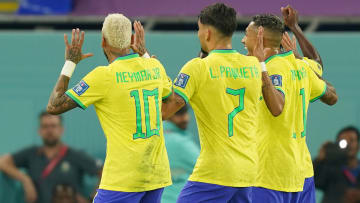 The Spurs striker headed over to the dugout to celebrate with his manager after putting Brazil into a commanding 3-0 lead inside the first half an hour of the game.

The celebrations were a theme of the night for Brazil, who cruised into the quarter-final after eventually dispatching South Korea 4-1.

But Tite’s decision to dance with his players drew the ire of former Manchester United and Republic of Ireland midfielder Keane, who slammed his antics on ITV and said he ‘couldn’t believe what he was watching’.

Keane also said Brazil‘s celebrations were ‘disrespectful’ but Tite was quick to suggest that it was simply a gesture of expression and happiness.

“There’s no interpretation other than happiness at the goal, happiness for the team, happiness for the performance,” Tite replied when told of the criticism. “There was no disrespect for the opposition nor towards [South Korea coach] Paulo Bento for whom I have a lot of respect.

Vinicius Junior, Neymar and Lucas Paqueta were also on the scoresheet for Brazil, who will take on Croatia on Friday afternoon in the World Cup’s first quarter-final.

Not everyone loved what Brazil did in the 4-1 thrashing of South Korea, with Roy Keane accusing them of ‘disrespect’.

The latest on Vladimir Coufal & Harrison Ashby’s futures at West Ham, as well as interest in Celtic’s Josip Juranovic and Everton’s Michael Keane.

Preview of Brazil’s World Cup round of 16 tie against South Korea, including team news, lineups and prediction.