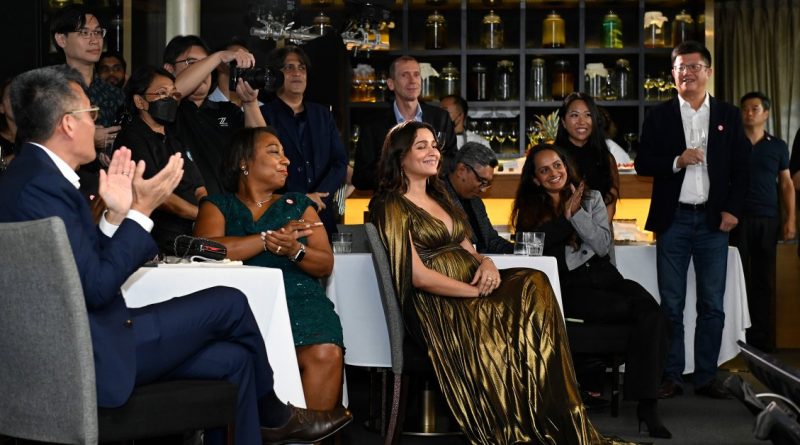 
Thank you to TIME for this amazing honor. Thanks to everyone for coming to support—and most importantly, supporting people who make a huge impact and difference around the world. Thank you to my wife Cynthia, for all her support for 39 years of marriage and 42 years total. To all of the other awardees, again thank you. I’m honored to share the same stage with you. I’ve read all your stories or heard about them, and I feel like I’m just a regular guy.

When I was asked to lead James Webb four and a half years ago in March 2018, as you heard, I wasn’t very supportive of doing that, really because I enjoyed doing what I was doing. It had many challenges—you heard about the technical, costs and schedule issues—but through all of those challenges, the team still got it done. And I can tell you how it was an honor to lead such a remarkable, resilient and smart team. It’s truly been a pleasure for me.

Through research and exploration, the world has gained a lot of knowledge about our universe. Over the past 30 years—we launched Hubble Space Telescope 30 years ago—we’ve learned so much about our universe. We’ve learned more about exoplanets in the last two or three decades thanks to missions like Kepler. But now we have Webb! And with Webb’s capability, it’s like no other.

We launched Christmas Day 2021, just a year ago. I haven’t done a scientific survey, but I believe there were more television sets on, on that Christmas Day, than in the history of humankind. Many people were watching. Got grandma up, got the kids up, got the grandkids up, to watch Webb launch. So I’m pleased for that, and a lot of the reasons for that: The world had heard about Webb being 100 times more powerful than Hubble, and Hubble had already given us a lot of magnificent information on our universe.

We learned about that huge mirror of 6.5 meters, which still blows my mind, and the sunshield that’s the size of a tennis court, much larger than the size of the room here, and all of that infrared capability. Thanks to all of the folks who followed us during that time. And during this time, Webb has shown us a lot about our universe. You’ve heard about the 13 billion years ago. We are actually looking beyond 13 and a half billion years; we’re looking at that 100-300 million years after the Big Bang to see galaxies being formed. So it’s gonna tell us a lot about our universe.

It’s also brought us a lot of element composition of exoplanets. Again, we’re still learning about exoplanets and potential habitability as we learn about the composition of these planets. Now, these are in other galaxies, not too far away from our own galaxy. We’ve also seen the moons of Jupiter, which is quite fascinating, and we have missions going to some of those moons pretty soon. And one thing that’s pretty amazing to me is to see the rings around Neptune. I didn’t say Saturn. We’re familiar with those rings, but this is Neptune, and Webb gives us that kind of capability. We are also seeing weather and seasonal activity on planets within our own solar system, planets like Mars. And we plan to send humans there, so it’s important to learn about that. It’s given us that kind of capability. So from the Big Bang all the way back to the nearest planet looking away from the sun, from Earth. So amazing, amazing capability there.

What Webb represents more so is that when teams work together, discovery is unlimited. It also brings us together. As I mentioned earlier, on Christmas morning last year, I think the world was closer than it’s been in a long time. And that’s because of innovation, discovery, exploration and just sharing human knowledge. So thanks to the Webb team for that and all the people who supported it around the world. Again, I’m pleased to receive this award. I’d say this is the second award of this type. So thanks to TIME for that and thanks to all who supported it.

And equally important, I hope my role in Webb has created a lot of inspiration around the globe. And especially for kids. It’s important for kids to see not just exploration but to see people like me leading these endeavors. Kids all over the world. So again, thanks to TIME and everyone supporting for highlighting these accomplishments and the impact that we’ve made. Thanks again.