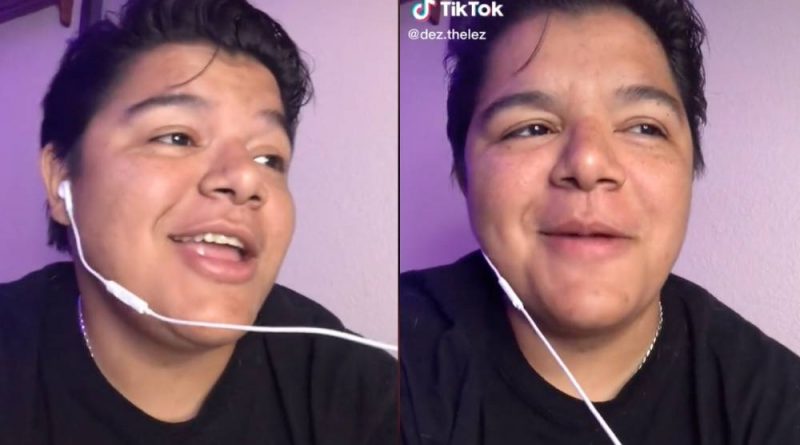 TikTok star Dez, who goes by dez.thelez on the social media platform, recalls the hilarious time her brother “stole” her “coming out moment” while they were driving to a family dinner. (TikTok/@dez.thelez)

A lesbian TikTok star shared the hilarious story of how her little brother “stole” her big coming out moment.

Dez, who goes by the username dez.thelez, recalled the story in a video titled “a coming out double feature” on TikTok, explaining that she tells her brother “all the time” that he “stole [her] coming out moment”.

As a teenager, Dez explained, she was “scared” to come out to her family because she “didn’t know how they would react”.

One day, they and their family were driving to dinner together when their younger brother, who “was about eight years old” at the time, decided to break some news.

“He said: ‘Hey guys, just wanted to let you know, I don’t like girls anymore. I think I’m gay. So I don’t know what we’re going to do about that’,” Dez recalled.

“I’m paraphrasing, of course,” the TikToker said. “But my dad looked back and he goes: ‘OK, I’m not sure you know what gay means.’”

The family explained to Dez’s little brother that being gay “doesn’t just mean that you like to be friends with boys”, but it also means that “you’re attracted to them”.

Dez recalled: “And we’re like: ‘So do you want to date boys?’

“And my little brother goes: ‘Hmm, can I get back to you on that?’”

The TikTok star said that their brother “isn’t gay by the way” – but they still like to remind him that he “still came out before I did”.

“By the time I came out, my dad was just like: ‘Oh, I did this already on the way to Soup Plantation. Be gay. I don’t care,’” Dez recalled, as she broke out in laughter.

TikTok viewers loved Dez’s coming out tale, liking their video over 305,000 times. One person joked that their dad must have felt like he’d “seen this episode before”, to which Dez responded: “Dad was like, oh I practiced this one!”

One follower joked that Dez’s brother “unlocked the closet for” her. Another wrote “he was the test run” for the family.

In a later video, Dez delved further into her coming out story, complete with dramatisations of her mum and dad’s reactions.

She explained that her dad was “not mad” about her coming out, and admitted that he “thought [he] was gay once” because of how he sneezed.

“Turns out it was just a cold,” Dez joked, in character as her dad.