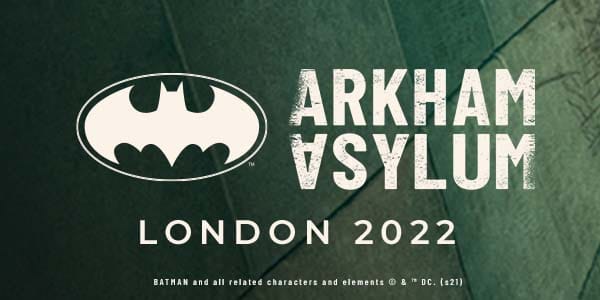 The Arkham Asylum Live Immersive Experience is heading to London in 2022.

The Arkham Asylum Live Immersive Experience is heading to London in 2022 – and it sounds incredible.

Fans of Batman will get the chance to become a citizen of Gotham City, as the theatrical experience unfolds in front of them.

Tickets for the Arkham Asylum live series will go on sale from 29 October via Ticketmaster.

The experience is “set in a vast, multi-sensory recreation of the psychiatric hospital, Arkham Asylum”.

Audience members will cross paths with some of Gotham City’s most iconic characters including Batman, Catwoman, Poison Ivy, Scarecrow and more.

It’s described as an “epic alternate reality” that combines “futuristic technology and interactive theatrics”, and you can check out the trailer below.

You can find out everything you need to know below, including ticket info, dates and more.

When do tickets for Arkham Asylum Live Experience go on sale?

They go on general sale at 10am on 29 October via Ticketmaster here.

When will the event be opening?

The Arkham Asylum Live Immersive Experience will be opening on 28 September in 2022 and running until at least 18 December.

What is Arkham Asylum?

Based on the comic books and graphic novels featuring Batman, this is an original story created for the Arkham Asylum Live Immersive Experience.

The theatrical experience offers fans the chance to explore the world of Batman as they’ve never have before.

You will enter the iconic psychiatric hospital and spend an evening alongside its bravest heroes and most infamous patients as an epic, multi-sensory narrative unfolds around you.

The experience will put the audience at the heart of the story. You won’t be a spectator, but a citizen of Gotham City, playing an active role in the world they’ve built.

While there you will meet Arkham Asylum’s bravest heroes and most infamous patients.