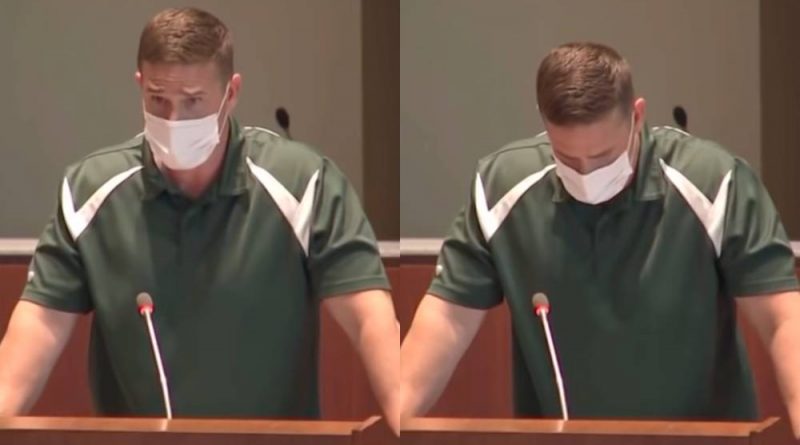 Gym teacher Byron “Tanner” Cross told a Loudoun County Public Schools board meeting that he opposed a policy to respect trans students’ pronouns and names because it is “lying” and “abuse to a child”. (YouTube/The Blue Oak Project)

A Virginia elementary school gym teacher has been reinstated after being fired for refusing to use trans students’ pronouns – and now he’s taking on the state’s school system.

On Monday (30 August), the Virginia Supreme Court upheld a lower court ruling that ordered for the reinstatement of Byron Cross, suspended by the Loudoun County school district after he fiercely opposed the board’s trans-inclusive policies.

The teachers, backed by anti-LGBT+ Christian legal group Alliance Defending Freedom, have filed a lawsuit against the board. They are seeking a preliminary injunction to allow them to freely misgender trans and non-binary students.

“The end result that we are asking for is a final judgment, which essentially says that the school cannot force Monica, Kim, and Tanner to use a student’s demanded pronoun,” the teachers’ attorney told The Daily Signal.

“That’s ultimately what we’re asking for.”

Virginia’s top court upheld the decision to keep Cross employed while he and the school board clashed over policy 8040, which requires all staff to use the “chosen name and gender pronouns” of trans pupils.

The rule was introduced by countless school boards after the General Assembly passed legislation mandating local school boards to have more trans-inclusive policies.

Policy 8040 in particular was based on the Virginia Department of Education’s “model policies” on how to treat elementary and secondary school trans, non-binary and gender non-conforming students.

But at a 25 May school board meeting, Cross bluntly refused to comply because they oppose his religious beliefs in an explosive speech to school officials.

To treat a trans student with respect by using their actual pronouns and name, he said, was to “lie” and amounted to “abuse”.

Cross was shortly after put on paid leave, which he countered by filing a restraining order and a temporary injunction against the board.

The Twelfth Circuit Court ordered the district to restore his position in June – the board filed an appeal, taking it to the state supreme court.

Another Supreme Court hearing is scheduled in September, the Mail Online reported.