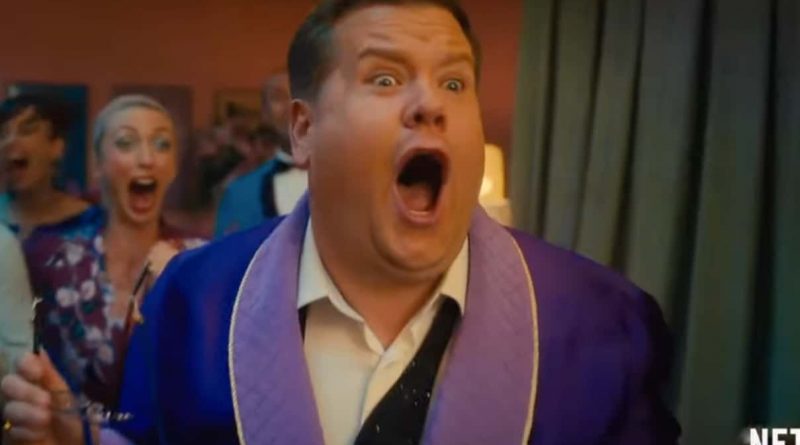 James Corden in The Prom. (Netflix)

Thousands of people have signed a petition demanding that James Corden be kept far, far away from the movie adaptation of Wicked.

Universal’s live-action remake of the hit musical will star Cynthia Erivo and Ariana Grande as Elphaba and Glinda, and will be directed by Crazy Rich Asians filmmaker Jon M Chu.

But fans’ excitement over the news was immediately accompanied by a creeping fear: that James Corden would somehow make his way into the cast.

The portly performer has somehow become a bankable name in stage-to-screen adaptations, perhaps finding that the standards of comedy are lower than on his chat show.

His recent credits include the deeply disturbing Cats, Rob Marshall’s Into the Woods, Amazon’s Cinderella and Ryan Murphy’s The Prom, in which he turned out a “borderline offensive” portrayal of a gay man that inexplicably won him a Golden Globe.

With Wicked‘s supporting cast yet to be revealed and Corden’s agents presumably eyeing up a flying monkey role, fans have made a desperate plea: “We have suffered enough.”

So far over 28,000 people have signed a Change.org petition calling on filmmakers to keep Corden out of Wicked. “James Corden in no way shape or form should be in or near the production of Wicked the movie… that’s pretty much it,” the description reads.

The petition quickly picked up speed on social media as people begged producers to protect the beloved musical at all costs.

“I’ve never signed a petition so quickly in my life,” tweeted the singer Jack Remmington.

It’s 2022, the Wicked Trailer has just come out, I am crying tears of blood as James Corden sings, “I think everyone deserves the chance to fly”

Please keep James Corden at least 300 yards away from our Wicked movie at all times pic.twitter.com/YpsZ1juR6t

me creating new email accounts to sign the “keep james corden out of wicked” petition pic.twitter.com/QPTEu2yjuc

society when james corden doesn’t make an appearance in the wicked movie pic.twitter.com/t1tDd5ZVK6

Wicked begins production in the UK in June 2022, with or without James Corden.