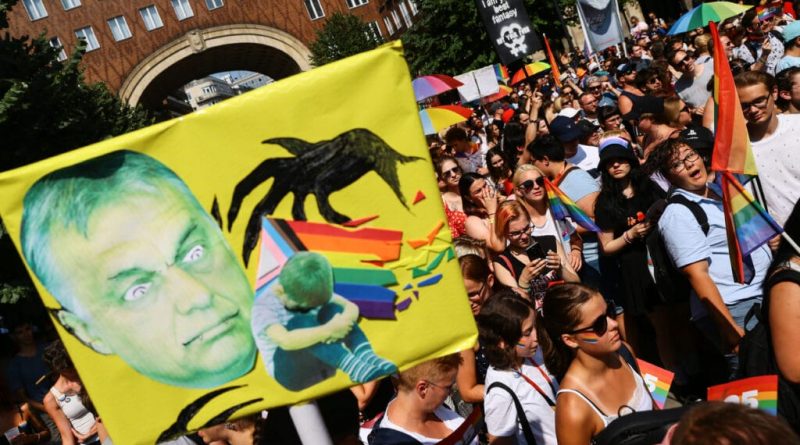 Thousands of people defiantly marched in the Budapest Pride parade on Saturday (24 July), in solidarity against anti-LGBT+ legislation in Hungary.

This year’s Budapest Pride was more of a protest than a parade, as it came on the heels of a new law banning the “promotion” of LGBT+ issues in schools, establishing a government-approved list sex education providers in schools and banning any LGBT+ content in advertising or media which could be seen by minors.

The new law is just the latest in a long series of attacks on LGBT+ rights in Hungary by prime minister Viktor Orban and his party Fidesz, from outlawing civil unions and same-sex adoption to even launching a bid to legally erase trans people.

The protest kicked off at 2pm, and thousands of queer Hungarians marched alongside their allies through the streets of central Budapest, waving Pride flags and holding placards.

One attendee told Reuters: “The law is an outrage. We live in the 21st century, when things like that should not be happening.

“We are no longer in communist times, this is the EU and everyone should be able to live freely.”

Although at least two counter protests were set up to oppose Budapest Pride, they were minuscule in comparison to the march itself.

At one, a handful of protesters gathered under signs that read “Hetero Pride Budapest”, and at another, bigots shouted “dirty gays” and “ban it”.

Many foreign diplomats joined in with the parade, in solidarity with the Hungarian LGBT+ community, and in support of EU legal action against Hungary over the anti-LGBT+ legislation.

Irish MEP Maria Walsh attended the march, and said in a video posted to social media: “We are here to shout from the rooftops that fundamental human rights and equality are principles of the European Union and therefore need to be respected and supported by Orban and Fidesz here in Hungary.”

She added when speaking to Sky News Europe correspondent Adam Parsons: “Enough has to be enough. We can’t keep talking about the buzz word of solidarity without actually implementing it in the rooms and around the tables that matter. Orban is only just starting.”

Belgian MEP Assita Kanko was also at the march, and shared a photo of her hugging a stranger.

She tweeted: “A young girl near me started crying when the speech begun. I couldn’t help giving her a hug and felt her sobbing against my chest.

“She said nothing but what is clear is that at this exact moment it is okay to be who you are. Free.”