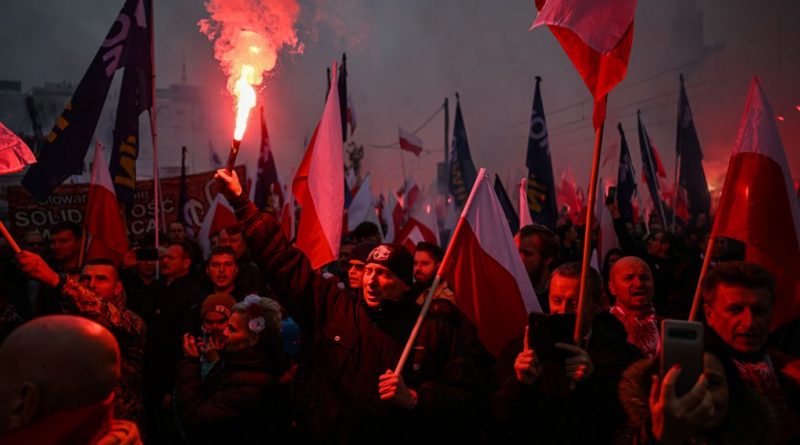 The march is controversial because it’s led by far-right groups and has included violence and white nationalists in past years. But many people, including some with young children, also march, seeing the event as a way to show patriotism.

Warsaw Mayor Rafal Trzaskowski, a liberal who opposes the event, said at a news conference that he was relieved that the march avoided the violence of past years but was still disturbed by the anti-Ukrainian and anti-EU messages.

Many people carried Poland’s white-and-red flag, while a few held banners of the far-right National Radical Camp depicting a falanga, a far-right symbol dating to the 1930s of a stylized hand with a sword.

Some marchers chanted anti-LGBT slogans, including “Stop Rainbow Propaganda,” according to the Gazeta Wyborcza newspaper.

This year’s Independence March took place under the slogans “Poland as a nation-state” and “Strong Nation. Great Poland.”

A large number of police officers were deployed and kept a group of anti-fascist counter-protesters separated from the march participants to avoid clashes.

One activist holding an LGBT flag, Dominik Gasiorowski, said an officer grabbed him and removed him and others who were chanting that they have the right to demonstrate. They were told their gathering was illegal.

At a separate location in Warsaw, an anti-fascist gathering included people in colorful clothes beating drums.

The Independence Day holiday celebrates the restoration of Poland’s national sovereignty in 1918, at the end of World War I and after 123 years of foreign rule. Across Poland, events were held to mark the day, including singing the national anthem in public and a ceremony led by President Andrzej Duda at the Tomb of the Unknown Soldier.

Duda was joined by Gitanas Nauseda, the president of Lithuania, which like Poland is a strong ally of Ukraine.

“Ukrainians will remember how you welcomed us, how you help us. Your country is our sister,” Zelensky said.

Poles have rallied to Ukraine’s cause, and Poland has welcomed large numbers of refugees. But there are also lingering tensions over a Polish-Ukrainian ethnic conflict in which 100,000 Poles were killed by Ukrainians during World War II.

Some far-right groups try to keep those tensions alive. Posters at Friday’s march read “Stop the Ukrainization of Poland.”