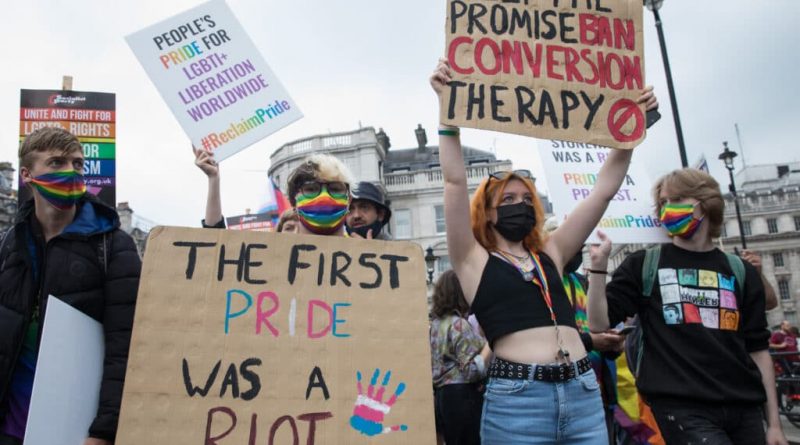 Protesters holding placards at the first-ever Reclaim Pride march on 24 July, 2021, in London (In Pictures via Getty/ Mark Kerrison)

Protesters marched in the first-ever Reclaim Pride event, beginning at Parliament Square and making their way to Whitehall. The protest paused at Downing Street and the Uganda High Commission in Trafalgar Square, to protest against the UK government’s stalling on LGBT+ rights and Uganda’s persecution of LGBT+ people respectively.

The march replaced the official Pride in London, which has been postponed until September because of the coronavirus pandemic, and many Reclaim Pride participants declared that the official parade had become over-commercialised.

In response, the “community-led march” endeavoured to “get back to the roots of Pride, being both a celebration and a protest for LGBT+ rights”.

With protesters chanting “Pride is not for profit, keep your hands off it”, and “trans rights now”, the event focused on five “LGBT+ liberation demands”.

Three of the demands were UK-specific; the passing of long-awaited legislation to ban conversion therapy in the UK, reform of the Gender Recognition Act (GRA), and that the UK become a “safe haven” for queer refugees.

While an upcoming conversion therapy ban was confirmed this year during the Queen’s Speech at the State Opening of Parliament, the Government Equalities Office has said legislation will only be brought forward following a consultation, which will look at “defending freedom of speech and upholding religious freedom”. No timeline has been announced.

Despite campaigners and politicians highlighting the desperate need for GRA reform by allowing trans people to self-identify, the Conservative government has scrapped all plans to reform the “dehumanising” process.

This year, UK Home Secretary Priti Patel announced her widely-criticised New Plan for Immigration. The proposals are likely to put countless LGBT+ refugees at even greater risk, penalising them for not disclosing their identity at the beginning of their asylum claim and sending them back to danger.

The last two demands of the Reclaim Pride march focused on LGBT+ rights worldwide by calling for the decriminalisation of LGBT+ identity across the globe, and solidarity with Black Lives Matter.

Yesterday’s #ReclaimPride march in London had five key demands for LGBT+ liberation and 2,500 marchers made them. pic.twitter.com/uFCacvKVYT

According to activist Peter Tatchell, one of the organisers of the march, more than 2,500 people took part.

He added on Twitter: “London’s Reclaim Pride today showed that Pride doesn’t have to be corporate and commercial. It was a celebration AND protest.

Phyll Opoku-Gyimah, the executive director of UK Black Pride, told Reuters: “We’re here to say that Pride is about inclusion.

“It’s about diversity, about speaking truth to power on a number of different issues for our trans non-binary siblings [and] for Black Lives Matter.”