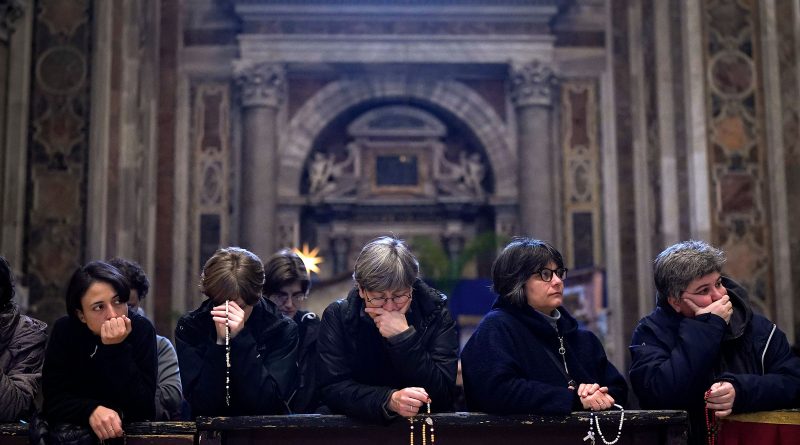 
Flags respectfully flew at half-mast in Vatican City on Thursday in an extraordinary ceremony that saw Pope Francis preside over the funeral of Pope Emeritus Benedict XVI, who made history a decade ago after announcing his retirement.

The last time a living pope presided over a rare requiem Mass over a dead pontiff was in 1802. In February 2013, Benedict became the first pope in 600 years to resign from office, acknowledging his “incapacity to adequately fulfill the ministry entrusted” to him. The last decade of his life, which outlasted his eight year pontificate, was spent in papal retirement at the Mater Ecclesial Monastery in the Vatican Gardens.

Benedict’s decision to retire may be what he is most remembered for. Francis has praised Benedict’s move as courageous, saying it “opened the door” for other popes to do the same. The reigning pontiff, who is 86-years-old and alternates between using a wheelchair and cane, has said he has outlined conditions in which he would resign.

Benedict was a controversial figure. His legacy was tarnished by the clergy sexual abuse scandal, even though he laid the groundwork for their punishment. As cardinal and later as Pope, Benedict passed legislation from 2004-2014 that defrocked nearly 850 priests. Abuse survivors have criticized Benedict for not going far enough.

Ahead of Thursday’s funeral, Benedict’s body was transferred to St. Peter’s Basilica on Monday. He lay in state ahead of the funeral service where his coffin was placed before the altar as the faithful recited rosary. Benedict notably requested a humble funeral in comparison to previous popes and while his funeral bore some differences, such as attracting fewer world leaders in an official capacity—the lengthy order of service was similar to a serving pope.

The body of late Pope Emeritus Benedict XVI, his head resting on a pair of crimson pillows, lies in state in St. Peter’s Basilica in Vatican City, on Jan. 4, 2023, as thousands of people filed by to pay tribute to the pontiff who shocked the world by retiring a decade ago.

Among the mourners in attendance were official delegations for Italy and Spain, as other heads of state and officials participated in a private capacity. These included at least four prime ministers and two delegations of royal representatives, the Associated Press reported. Sofia, former Queen of Spain; King Philippe of Belgium; Queen Mathilde of Belgium; Giorgia Meloni, Prime Minister of Italy; Sergio Mattarella, President of Italy, were all photographed among the masses. Floods of cardinals also gathered dressed in their distinct red robes.

As Benedict lay at the altar, two items could be seen atop his coffin—a rosary he used in his lifetime and a scripture book. The Sistine Chapel choir featured prominently throughout the service.

Faithful stand in St. Peter’s Square to bid farewell to the body of the late Pope Emeritus Benedict XVI, who is laid out in public in St. Peter’s Basilica, on Jan. 4, 2023.

Benedict’s personal secretary Archbishop Georg Gaenswein also shared the deceased’s final words, noting that a nurse told him the former pope simply professed his love to God. “With just a whisper of a voice, but in a clearly distinguishable manner, [Benedict] said in Italian, ‘Lord, I love you!’ I was not there at the moment, but the nurse told me about it shortly afterwards,” Gaenswein said, according to Sky News.

The funeral service also included the Offertory Chant, before the ceremony moved on to the Liturgy of the Eucharist, the second of two principal rites of mass, that recalls Jesus Christ’s last supper by presenting bread and wine at the altar. This was followed by the Communion Rite as priests distributed bread dipped into wine and placed wafers on the lips and tongue of anyone who stepped forward.

Francis then recited the Final Commendation and Farewell, asking God to console the grieving Church and receive Benedict XVI’s soul. He also lit incense while Cardinal Giovanni Battista Re sprayed holy water on to the coffin.

Benedict will be buried in the so-called Vatican grottos, joining nearly 150 of his predecessors under St Peter’s Basilica. He will be laid to rest in a tomb with John XXIII and John Paul II, Benedict’s immediate predecessor.