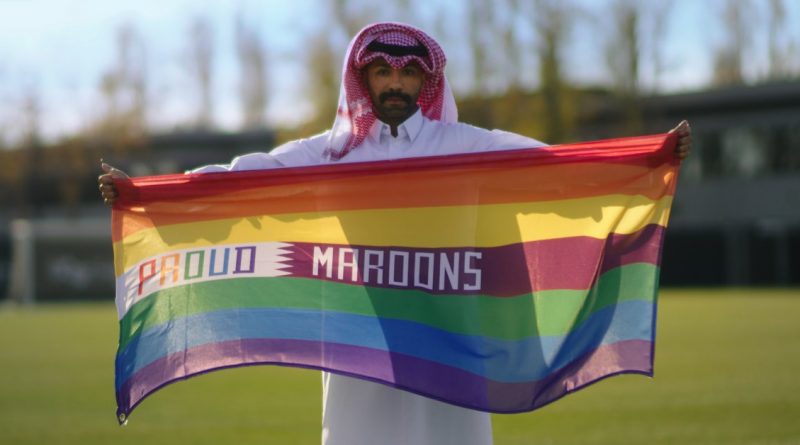 
Most soccer supporters’ groups are set up to bring like-minded fans together. Dr. Naser Mohamed set up his to highlight an injustice. As the first and currently only Qatari to publicly come out as gay, Mohamed­—a doctor who has lived in the U.S. for the past 11 years—on Monday launched Proud Maroons: an LGBTQ+ supporters club for Qatar’s national team, named for the hue of their jerseys. But given homosexuality is criminalized in Qatar, he is likely to remain its only member for the foreseeable future.

Mohamed, 35,­ decided to openly declare his queer identity in May to highlight abuses against the LGBTQ+ community in his homeland, where the 2022 FIFA men’s soccer World Cup kicks off on Nov. 20. This has forced him to become estranged from his family, lose his inheritance, and to claim asylum in the U.S. on the basis that he faces persecution in Qatar because of his sexual orientation.

In the months since, Mohamed launched the non-profit Alwan Foundation to advance LGBTQ+ rights across the Middle East and especially Qatar, where he says that security operatives infiltrate gay communities in order to torture and coerce members to inform on others. (The Qatari government denies it persecutes LGBTQ+ people and says all fans are welcome “without discrimination” to attend the World Cup. But LGBTQ+ people have been arbitrarily detained as recently as September, according to Human Rights Watch.)

Mohamed speaks to TIME about the reality of life for LGBTQ+ people in Qatar and what the World Cup means for them.

TIME: As a gay Qatari, do you feel that hosting the World Cup can bring change?

Mohamed: I know a few LGBT people at home who are trying to raise attention that there is severe persecution in Qatar, which is getting worse leading up to the World Cup. And it will be even worse after the World Cup. And we’re really trying to summon help quickly now, before people lose interest in the issue, and we’re on our own again.

You’re estranged from your family in Qatar. Is that because of their beliefs or it would put them in danger to maintain a relationship with them?

It’s both. I came out to my parents in 2015. (Well, I came out to my mom; she wouldn’t let me speak to my dad.) They just cut me off. And I haven’t heard a word from them; they didn’t even call to yell at me! Because it’s not safe to establish a connection with me. But that’s where we are and it drives me insane when Qatari PR tries to downplay [the treatment of LGBT people].

What’s it like for the LGBTQ+ community in Qatar? Is there an underground gay scene or is that too dangerous?

There were a couple of spots that were shut down by the cops. They’re not clubs, but cruising spots that the community knows. But they’re super down-low, because they can be infiltrated by undercover cops. There are even sex parties and things like that but they’re all super small. And they don’t know about each other. And that’s because when one of them is infiltrated by an undercover cop, they really aggressively try to find the contacts that each person has. So it’s very dangerous for them to know about each other.

What kind of punishments and persecutions does the LGBTQ+ community suffer?

The severity of persecution is on a spectrum. The more feminine you are, and poorer you are, the more severely persecuted. [Torture] exists, but also state-mandated conversion therapy, this is a huge thing. And then there is just like a complete lack of protections for us. Like if our families or people on the street want to hurt us, there’s no protection. There are some people from really affluent families that are gay and it’s almost public knowledge—but they’re really wealthy, affluent, and very connected, so people just don’t say anything. But even the most powerful gay [person] in Qatar is powerless in some ways.

So, do you believe that during the World Cup, when there’s a lot of foreigners milling around, the authorities will take a step back. And then when it finishes, there’ll be a crackdown on LGBTQ+ people?

That’s what I expect. If it were up to them, they would keep strict control. But there are two things: one, they really care a lot about PR. All the things they do to [the LGBTQ+ community] are in the shadows—nothing is public. Because they really care about how [the world] perceives them. But also they don’t have the resources to [crackdown] during the World Cup, resources to dedicate to hunting LGBT people.

Do you think that LGBTQ+ fans should go to Qatar for the World Cup? Or is it just too dangerous?

I worry because the public there has been in a bubble; they have zero understanding of LGBT people. They could take a LGBT display as a personal attack. They could gaybash and get away with it with no consequences at all. And if such an attack happens on a gay fan, I don’t know of the [security] resources to help them. So I feel like people with gender expression that is not heteronormative are going to be big targets. [LGBTQ+] people that show affection in public in any way would be targets; people who hold rainbow flags will be targets.

That hardly sounds inclusive. So, should all fans be boycotting the Qatar World Cup?

If it would make somebody feel better that they’re not supporting this, then sure. But if you’re a diehard soccer fan and you really, really want to go, then you’re not an awful person for going and watching the games. But there are ways to advocate for the cause and push it. I’m trying to find, hopefully, actionable items for people so, if you’re passionate about this, and you want to take action, these are the things you can do. So that we’re not just talking the talk, but taking steps to advance and advocate for the community and LGBT rights.

So if regular LGBTQ+ people can’t speak up, who should be?

I’m looking at the teams, at the players, FIFA, at [Qatar ambassador] David Beckham, these are the people that can and should really be making statements because they can’t be touched, they’re safe. But your average fan, once again, should really pick their battles and see what they can do within their own means without getting themselves hurt. Don’t lose your life over it.

Why is there so little discussion about LGBTQ+ issues in the Middle East?

Since coming out in May, I got connected to the larger LGBT community in Qatar, which has been tough because I was worried about safety issues. [Before the Alwan Foundation] there was no LGBT organization that covers the Gulf region. That is a huge disadvantage because there’s an [established], methodical way of reporting country conditions by human rights organizations like Amnesty and Human Rights Watch, both of which I’m connected to now. So they want to interview the victims directly, which is very, very difficult and dangerous. Hopefully [through the Alwan Foundation] people can get help and have a methodical way of communicating what’s truly happening on the ground.

Isn’t there a risk that the LGBTQ+ outcry is emboldening Islamophobia?

There are, of course, xenophobic and Islamophobic twists to the topic. It’s being used by everybody. It’s being used by the abusers to gaslight people that are trying to advocate to keep them silent. And also there are truly xenophobic and Islamophobic people who are having that confirmation bias moment: they’re like, “Oh, I knew Islam is s—t” or “I knew Arabs are s–t,” which is bringing more hate and is really not helping the situation. I think everybody should participate in human rights conversations, regardless of where they’re from, or what their religion is. Believing that violence and human rights violations [are specific to] any culture or any religion is totally xenophobic and Islamophobic.

Is there any prospect for progressive change in Qatar?

I really believe there is. It will look different and it will take generations, frankly. But it won’t just happen magically; somebody has to do it. Meanwhile, the people that are affected now need help and support and resources.

This interview has been edited for clarity and length.