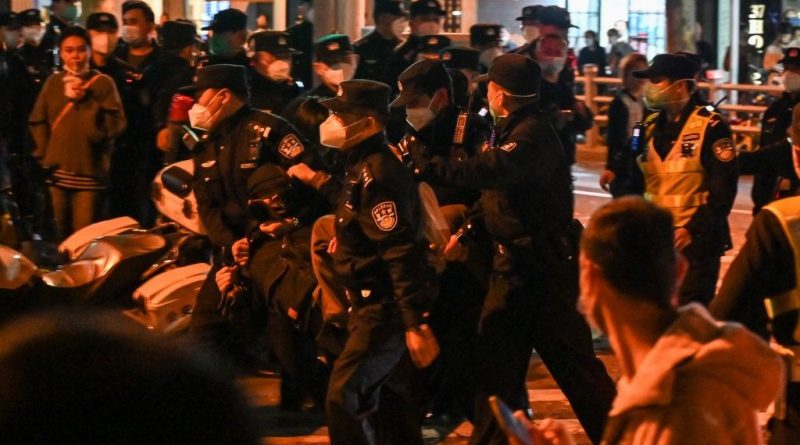 
Just a few days after the zero-COVID protests began in Shanghai, Xia, 17, went to see her friends’ performance of their theater school play in early December. It was a routine production except for a small but significant change. In one scene, one of the characters throws his hands up, flinging a stack of white papers into the air in a moment of desperation. But on this particular evening, there were no blank sheets of papers.

The blank sheet of paper has become the main protest symbol in China as a representation of everything China’s demonstrators want to say but cannot. The absence of the paper during the play is a sign of the fear that now permeates the XuHui district neighborhood where the theater is located, and protesters gathered just days before to vent their frustration about the ongoing and draconian COVID-19 policies. “Of course we all understand the decisions the director made—even though they are ridiculous. He doesn’t want to get into trouble,” says Xia, who had helped organize the performance.

Protests broke out in cities across China at the end of November amid growing anger at President Xi Jinping’s strict zero-COVID approach. A fire on Nov. 24 at an apartment block that took the lives of at least 10 people in Urumqi, the capital of the northwestern Xinjiang region, was the apparent catalyst with social media users who say that strict COVID measures had delayed the emergency response. (The local government denies this.) In Shanghai, China’s financial and commercial capital, a candle-lit vigil began on Nov. 26 on Wulumuqi Street for those who died in the autonomous Muslim-majority region and turned into heated protests. Hundreds of people gathered, many holding up blank sheets of paper, while chanting: “No PCR tests, we want freedom!” Police intervened on the second day to disperse the protesters, beating and arresting many.

Read more: Why a Blank Sheet of Paper Became a Protest Symbol in China

It is not known exactly how many people were arrested. But protesters who were released tell TIME stories of their ordeal. “They pushed me against a police car, pulled me down on the street, and hurt my head,” says Chun, 27, who was rounded up with dozens of other protesters during and following the two-day demonstration. He adds that they were strapped to chairs with their wrists and ankles tied and cigarette butts and bottles were thrown at them. In a Nov. 29 statement, the government said it would “resolutely crack down” on “activities by hostile forces.”

Chun says that officers demanded they strip naked and police taunted them with humiliating remarks. “When someone mentioned basic human rights, the police took it as a joke,” adds Jin, 21, who was also arrested following the candle-lit vigil. Both say that most who were detained alongside them were held for over 24 hours in rooms that were too small to lay down in. The lights were also left on all night, making it impossible to sleep, Chun and Jin say.

“The officers took my phone and asked for my passwords. They said it’s the normal procedure for everyone who gets arrested. But that’s ridiculous,” says Chun, who says he refused. He was arrested for “picking a fight during the vigil,” an accusation he says is false and one that is commonly leveled by the government. Prior to the protests, Chun says, he posted critical messages about the Chinese Community Party on his WeChat page and also refused the regular COVID-19 tests at his workplace. “It cost me my job a few times,” he says. Now, he is unemployed.

Another young man who took part in the vigil that turned into a protest was taken away by police and says that they tried to track down protesters, even in the days afterwards. “My friend was arrested. I don’t understand how they know he was involved in the protests. But the police had access to his entire WeChat history,” he says, via an encrypted messaging app. (He declined to reveal his name, citing concerns over his safety.)

Weeks after the initial protests in Shanghai and other cities, information is continuing to spread and leading to further demonstrations, thanks in part to the use of encrypted apps and virtual private networks (VPNs). Xing, a university student in a small city in the southwest of the country, shares information to TIME via a messaging app. Ten days after the protests erupted in Shanghai, 300 students at his university gathered on campus to protest. A few positive COVID-19 cases were detected and they were afraid of being locked in their dormitories again.

“The government’s policy is such a mess and so hard to predict,” he says. “We are afraid that we might not get home for the Lunar New Year [at the end of January].” The students know about the other protests, and it has spurred them on. “Our protest isn’t related directly to what happened in Shanghai,” says Xing, “but I guess the spirit and courage are passed on by people there.”

While residents in Shanghai appear too afraid to take to the streets again—at least for now—there is a sense that the recent protests have created a turning point from which there is no going back. Protests in China generally are rare and localized to a specific issue but the oppressive zero-COVID policy impacts everyone, says Wu Qiang, a political analyst based in Beijing. “The protests happened nationwide, and almost all classes joined in,” he says. The protests have been described widely as the most important since the 1989 student-led demonstrations, and subsequent crackdown, in Tiananmen Square in Beijing. However, “those were limited to abstract democratic values,” explains Wu. “This time, it’s about specific freedoms. It’s about specific aspects of human rights. Dignity is what the middle-class cares about most now.”

The Chinese government at first seemed unwilling to admit that anything was going on, as if ignoring the protests would cause them to peter out. That approach began to shift following a Nov. 28 Twitter post by influential commentator and former Chinese state-run media editor Hu Xijin, which acknowledged the protests but said that “China will not become chaotic or out of control.”

“Political stability is always Xi’s priority,” says Chen Daoying, a political scientist at the Shanghai University of Political Science and Law. He says that the zero-COVID policy is so connected to the CCP leadership that it has hit home in Beijing. “Do not underestimate the determination of the CCP to prevent color revolutions. Xi Jinping has always emphasized that danger,” Chen adds.

Read more: What the Protests Tell Us About China’s Future

At the same time, Xi has begun to dismantle his zero-COVID policy such as QR codes and health tracking apps, meaning people can travel more freely and do not need to provide a negative test before entering businesses or public transport. China also announced the end of controversial government-run quarantine facilities, allowing those with mild symptoms to quarantine at home instead. These concessions were made to appease, says Jean-Pierre Cabestan, a Hong Kong-based political scientist. “Pressure was too high. The party couldn’t isolate it. The pressure of the people accelerated the policy shift,” he adds. “There were many factors, but in the end, the street has spoken.”

Although Xi has loosened his zero-COVID policy, it has lasted for so long that it’s caused problems that aren’t easily solved. Local governments are struggling financially due to the expenses of quarantine centers and daily mass COVID-19 testing. Nationally, the economic outlook is grim, with an estimated 2.8% GDP growth this year—far below the 5.5% the government had previously predicted. Meanwhile, one out of every five young Chinese people are unemployed.

For now, given all the security measures, it is not likely that blank sheets of paper will be seen so openly on the streets. Sitting in her family’s living room in early December, Xia resolutely shakes her head when asked if she would go and protest on the street if they happen again. “Much too dangerous,” she says.

Editor’s note: Names were changed due to safety concerns.