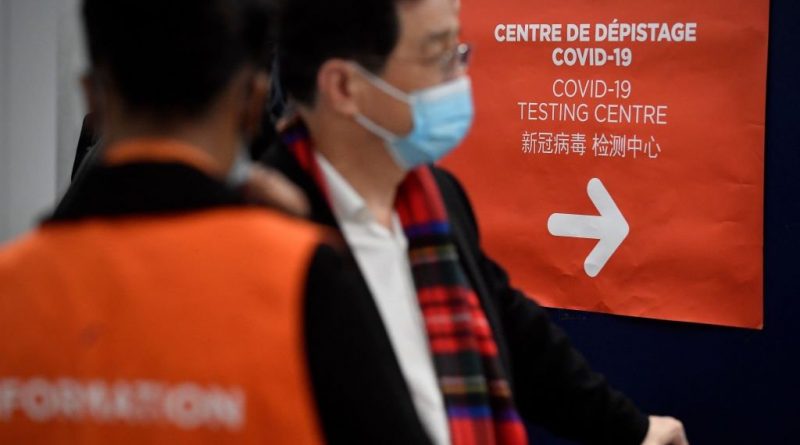 
As COVID-19 infections in China continue to rise, and as concerns grow over the reliability of the country’s reporting and sequencing of cases, more than a dozen countries have announced new entry restrictions on travelers arriving from China at a time when they’re largely on the way out.

Some countries, including the United States and Britain, are reintroducing compulsory pre-flight COVID-19 tests for people flying from China. Others, such as Japan and Italy, are requiring testing upon arrival and quarantine for those who test positive. One country, Morocco, has even decided to ban entry to all travelers coming from China outright in a measure that will go into force on Tuesday.

The new restrictions haven’t gone down well in Beijing, which in a stunning reversal began dismantling its draconian zero-COVID policies last month following rare public protest. Chinese state media labeled the new testing requirements “discriminatory” and a politically-motivated effort to undermine the Chinese government. Meanwhile, some public health experts have cast doubt on the effectiveness of these measures. “Trying to ban a virus by adjusting what we do with travel has already been shown not to work very well,” Andrew Pollard, the director of the Oxford Vaccine Group, told the BBC.

Italy was among the first to announce new entry requirements for travelers arriving from China, with its health minister announcing on Dec. 28 that all airline passengers would be subject to mandatory testing upon arrival. Italy is the first and only European country to require such testing so far. Among one of the first flights subjected to testing, more than a third of all its passengers tested positive for COVID-19. On another flight, half of the passengers tested positive.

On Dec. 28, the Centers for Disease Control and Prevention announced that the U.S. will require travelers arriving from China, Hong Kong, and Macau to present a negative COVID-19 test taken no more than two days before their departure. The new restrictions, which go into effect on Jan. 3, come amid rising concerns over China’s lack of transparency over its outbreak as well as its failure to adequately track and sequence variants within the country.

“Variants of the SARS-CoV-2 virus continue to emerge in countries around the world,” the CDC said in its announcement. “However, reduced testing and case reporting in the [People’s Republic of China] and minimal sharing of viral genomic sequence data could delay the identification of new variants of concern if they arise.”

From Jan. 5, the French government announced that it will require travelers from China to present a negative COVID-19 test no less than 48 hours before departure. Passengers will also be required to wear a mask in flight and commit to undergo random testing on arrival.

From Jan. 5, travelers from China to the U.K. will be required to show a negative COVID-19 test taken no more than two days prior to departure. In addition, a sample of passengers will also be subject to testing upon arrival.

“The decision has been taken to introduce these measures specifically for China arrivals due to a lack of comprehensive health information shared by China,” the country’s health department said in a statement. “If there are improvements in information sharing and greater transparency then temporary measures will be reviewed.”

From Jan. 3, the Spanish government will require travelers arriving from China to provide a negative COVID-19 test or proof of vaccination. For the latter, Madrid said that it would accept any vaccine recognized by the World Health Organization, which includes Chinese-made Sinovac and Sinopharm.

Around one-third of China’s population—over 250 million people—have not received a third dose of a COVID-19 vaccine. The figure climbs to 60% for those aged 80 and up.

From Jan. 5, people traveling from China, Hong Kong, and Macau to Australia will be required to show a negative COVID-19 test taken within 48 hours prior to travel. “This is a temporary measure reflecting the lack of comprehensive information right now about the situation in China,” said Mark Butler, Australia’s health minister.

From Jan. 5, all air travelers over the age of two arriving from China, Hong Kong, and Macau will be required to provide a negative COVID-19 test no more than two days before their departure or proof of a recent COVID-19 infection. The measures will be reassessed after 30 days, according to Canada’s public health agency. Masking in-flight will be strongly recommended, but not required.

Japan, which was among the first countries to impose new entry requirements, has from Dec. 30 required that all travelers from China (excluding Hong Kong and Macau) submit to testing on arrival. Those who test positive will be required to quarantine for seven days.

From Jan. 5, travelers from China will be required to undergo a COVID-19 test before and after arriving in the country, the government announced on Dec. 30. South Korea also said that it would also restrict issuing short-term visas for Chinese nationals until the end of the month and temporarily halt increasing flights between the neighboring countries.

As of Jan. 1, India announced that it will require travelers arriving China and Hong Kong, as well as Japan, South Korea, Singapore, and Thailand, to provide proof of a negative COVID-19 test no more than 72 hours prior to departure. The Indian government previously announced that it would also begin testing 2% of international arrivals for COVID-19 at random.

On Dec. 30, the Malaysian government announced that it will begin screening all inbound travelers from China and elsewhere for fever, and will administer those who are detected to have a fever or other symptoms with a COVID-19 test. The government said it would also test wastewater on aircrafts arriving from China in a bid to detect new variants.

Israel announced on Dec. 30 that all non-Israeli travelers arriving from China would be subject to pre-flight PCR tests taken within 72 hours before departure.

From Jan. 3, all travelers from China must submit a negative COVID-19 test within 48 hours of departure, regardless of their vaccination status.

From Jan. 3, all travelers from China regardless of nationality will be banned from entering Morocco. The announcement, which came just days before the ban was due to be imposed, is the strictest measure yet taken by any country in response to China’s surge in cases.