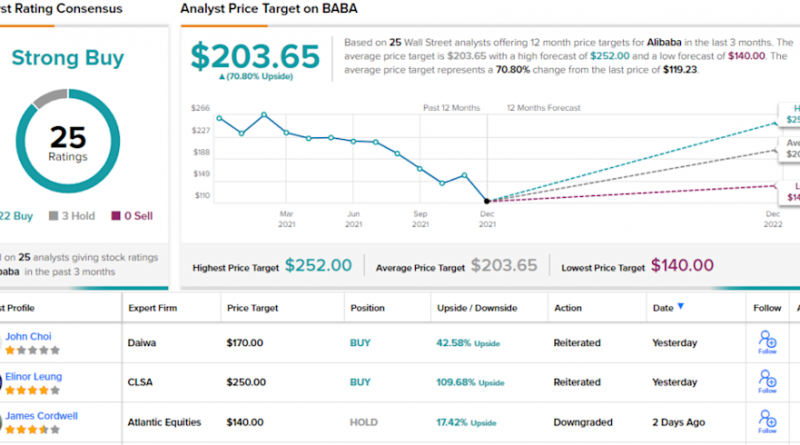 There’s no way around it, investors have endured a torrid time. The negatives have kept on piling up; from lackluster earnings to a slowing Chinese economy to regulatory uncertainty, and the result has been year-to-date share losses of a depressing 49%. Or as Truist’s top Youssef Squali puts it, it is “the worst mega cap in our coverage universe.”

However, last week the ecommerce giant hosted its annual Investor Day (which took place over 2 days), and Squali came away confident Alibaba wants to put things right so to “rebuild shareholder value.” Whilst recognizing that “macro, competition and regulatory hurdles abound,” the 5-star analyst came away “impressed by the massive opportunity for BABA in China/SE Asia.”

Well, in a funny sort of way, Squali was glad to learn of the “magnitude of losses on emerging initiatives including Local, Taobao Deals, Taocaicai and International.” More to the point, what Squali liked was to be provided with details of revenues and profitability per segment. And those – for now – losing initiatives also shone a light on the “sustained healthy margin of the more mature, China Commerce core business.”

Those losing initiatives form part of the huge investment cycle the company is undertaking and two segments which were in investment mode for the last several years – Cloud and Cainiao – are starting to reap the rewards with both now “virtually at profitability.”

Importantly, Squali says, management is also showing a willingness to recognize the “potential of creating value by raising external capital for money-losing units.” This will not only help reduce the “investment pressure” on the group’s margins but will also “capture the valuation disparity between its subsidiaries and public peers.”

Squali cites Trendyol, the company’s Turkish ecommerce business unit, as an example of this strategy. Trendyol raised $1.5 billion in a private placement led by Softbank giving the company a $16.5 billion valuation. There was also talk of separately listing certain units. Squali thinks Cainiao and Lazada are two businesses that could “materially benefit from such a strategy.”

To this end, Squali rates BABA stock a Buy and has a $200 price target for the shares. Investors stand to pocket a 68% gain, should all go according to plan over the next 12 months. (To watch Squali’s track record, click here)

Most analysts remain on BABA’s side; barring 3 Holds, all 22 other ratings are positive, making for a Strong Buy consensus rating. Following this year’s share losses, there’s plenty of upside in the cards; the $203.65 average price target suggests investors will be sitting on returns of ~71% a year from now. (See Alibaba stock analysis on TipRanks)

See what top Wall Street analysts say about your stocks >>

Disclaimer: The opinions expressed in this article are solely those of the featured analyst. The content is intended to be used for informational purposes only. It is very important to do your own analysis before making any investment.