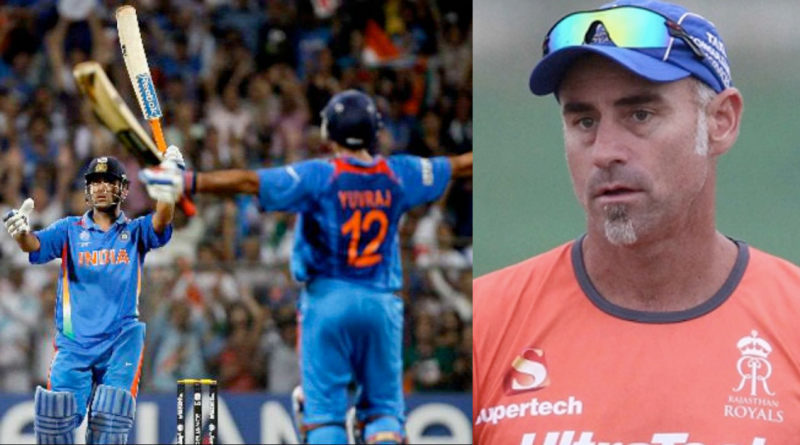 
There is no secret that MS Dhoni took a bold decision to bat ahead of Yuvraj Singh in the 2011 World Cup final against Sri Lanka at the Wankhede stadium. Yuvraj had scored 341 runs in seven innings before the important clash in the quest for the coveted trophy.

In the chase of 275, India were already dented with the early wickets of Virender Sehwag and Sachin Tendulkar before Gautam Gambhir and Virat Kohli revived the innings over the course of their 83-run alliance. Kohli returned a catch of Tilakaratne Dilshan’s bowling in the 22nd over to depart on 35.

Everyone expected Yuvraj to join Gambhir on the pitch but the case was different as the then Indian skipper walked out to bat at No.5. Dhoni build a crucial partnership with Gambhir of 107 before the latter lost his way on 97.

But a calm and composed Dhoni ensured he stayed till the end and finished the game with a crackling six off Nuwan Kulasekara’s bowling as India lifted their second World Cup after 28 years.

South African-born coach Paddy Upton, who was India’s mental conditioning coach during the marquee event, tripped down memory lane to narrate the instance of Dhoni revealing his decision to promote himself in the batting order to the team management.

“To start with, Dhoni always likes to stay inside the dressing room during a game and not sit out. It was the same that day. He was behind the full glass frontage that is there at the Wankhede dressing room. Gary was sitting outside and I was right next to him. I remember distinctly, I heard a knock on the window. Gary and I turned around at the same time. It was Dhoni, he indicated he was batting next. That was it. Sign language. Gary just nodded,” Upton wrote in a column for The Indian Express on April 3, 2021.

“There was no talk between the two. Dhoni had made the decision that this was the time for him to stand up and do what Dhoni does. He would do what he is the best in the world at – which is seeing a team home in a chase in the second innings in a white-ball game. He had delivered nothing in the eight games before the final. Yuvraj had done his bit, he had played his tournament. He was done, he was spent. That moment was set up for someone like Dhoni,” he further mentioned.

Dhoni was awarded player of the match in the final for his 79-ball 91, which included eight boundaries and a couple of sixes at 115.18.