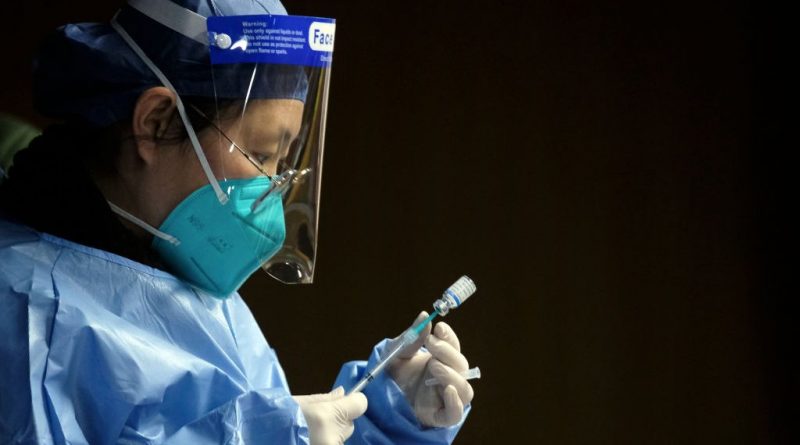 
China has rebuffed repeated U.S. offers to share advanced vaccines as Beijing battles a fast-spreading wave of COVID-19, a rejection that’s led to growing frustration among American officials concerned about a resurgence of the pandemic.

Worried about the rise of new variants and impact on China’s economy, the U.S. has repeatedly offered mRNA vaccines and other assistance to President Xi Jinping’s government through private channels, according to U.S. officials who asked not to be identified discussing the deliberations.

U.S. officials have also proposed indirect ways to supply the vaccines in an effort to accommodate political sensitivities in China on accepting foreign aid, they said, without providing more details.

The U.S. offers have been made by senior diplomats, including during a December trip to China by Assistant Secretary of State Daniel Kritenbrink and National Security Council Senior Director Laura Rosenberger, as well as through public health officials and intermediaries. Although U.S. officials have said publicly that they’ve offered vaccines to China, the full extent of that outreach hasn’t been previously reported.

“We have enough vaccines to make sure that people eligible have access to vaccines,” she said. “We will continue to work with the international community, including the US, to better deal with the challenge of COVID and protect people’s life and health.”

It’s unclear how useful mRNA shots would be as the omicron variant runs rampant in China — antivirals to treat infection, like Pfizer Inc.’s Paxlovid, is the more urgent need now. The problem for the Communist Party has more been persuading its vulnerable elderly population to take the jab: Only about two-thirds of people over age 80 have gotten fully vaccinated as of November, the last time data was released.

Moreover, accepting vaccines from the U.S. is likely a nonstarter politically for Xi, as it would shine a spotlight on Beijing’s failure to develop its own mRNA vaccine at a time when China is pushing for self-reliance amid a broader strategic fight with the U.S. China historically has been reticent to accept outside assistance during crises.

The rising frustration — shared by both sides — underscores just how hard it will be for the U.S. and China to stabilize ties after a meeting between Xi and President Joe Biden in Bali last year. It’s also highlighted the significant distrust and suspicion that remain between the world’s two biggest economies.

“The Xi administration’s propaganda narrative on COVID has long emphasized its ‘success’ as an outcome of China’s unique political institutions, and so this has artificially limited access to external vaccines,” said Jude Blanchette, Freeman Chair in China Studies at the Center for Strategic and International Studies.

“Even in the midst of a catastrophic outbreak of COVID, Beijing continues to emphasize vaccine nationalism, a decision that will undoubtedly result in unnecessary deaths,” Blanchette said.

Early on, as tens of thousands of Americans died, China held up its COVID Zero approach of strict quarantines, travel limits and heavy masking as a model to the world that it was saving lives — and pointedly suggested the U.S. was recklessly killing its people. But now China is suddenly allowing the virus to run rampant, an abrupt shift that occurred days after spontaneous street protests against lockdowns.

As a result, the U.S. has ramped up its offers in recent weeks, one of the people said. The two sides continue to speak through health channels, another person said, adding that China’s response to the repeated U.S. offers has been firm. Every time, Chinese officials have told their U.S. interlocutors that Beijing has the situation under control and doesn’t require assistance, according to the people.

Xi’s administration has officially acknowledged about 30 COVID deaths since it abandoned strict pandemic controls at the beginning of December, prompting governments around the world to impose restrictions on Chinese travelers. China has said the shift was the correct policy because omicron isn’t as deadly as other variants.

In a briefing on Thursday, Liu Pengyu, a spokesman for the Chinese embassy in Washington, pushed back against suggestions that its vaccines weren’t effective.

Liu cited a University of Hong Kong study that suggested three doses of Sinovac Biotech Ltd.’s CoronaVac were 97% effective against severe illness or death, roughly in line with three doses of an mRNA vaccine. He added that China has administered 3.4 billion shots domestically and has an annual production capacity of 7 billion doses, making China a player in vaccine exports.

“China can not only meet domestic demand but also supply to other countries in need,” he told reporters. “We are also working to upgrade the vaccines to make them more effective and bolster vaccinations to cope with possible new variants so that we will continue to play a constructive role in the global COVID fight.”

Governments and health officials from around the globe are seeking more transparency from China. Xi’s government has long blocked foreign inquiries into the origins of COVID, frustrating American officials, and the World Health Organization this week pleaded for more data from China.

U.S. officials have grown even more vexed because China has threatened retaliation over requirements imposed by the U.S. and other nations that travelers coming from China submit proof of a negative COVID-19 test. Still, it’s unclear what that would look like since China already requires travelers to get a PCR test before entering.

Asked this week if he was concerned about the way China is handling the virus, Biden said, “Well, yes I am.”

“We just got to make the protocol we set out: that if you’re flying from China, you got to be tested, and so on,” Biden told reporters. “I know they’re very sensitive when we suggest they haven’t been that forthcoming.”