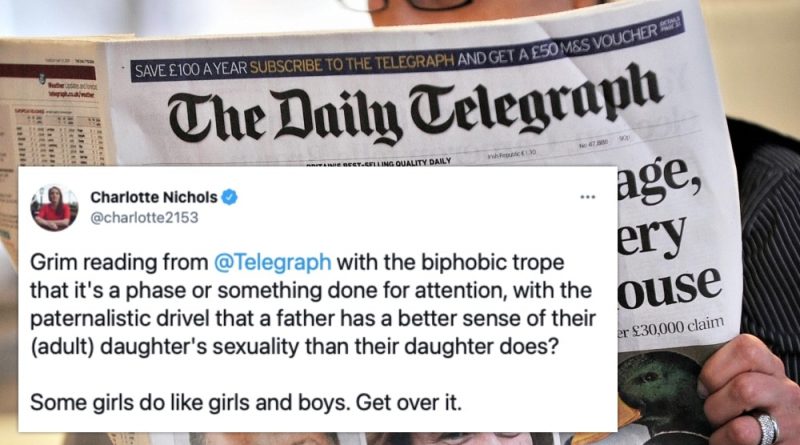 The Daily Telegraph ran an anonymous column by a father who invalidated his teenage daughter’s bisexuality. (Getty Images/Twitter)

British newspaper The Daily Telegraph published a “grim” and “biphobic” letter about a father who called his “woke” daughter’s bisexuality a “trend”.

The Daily Telegraph, a conservative broadsheet whose circulation shrunk by nearly 50 per cent between 2010 and 2019, has launched a “Parenting Confessions” column that sees parents write pieces about “family secrets the would never talk about in public”.

In its first letter published Monday evening (26 July), an “anonymous author” spends some 600 words slamming his “preachy” bisexual daughter as he, well, preaches about how she is a “snowflake Gen Z” who cares about trans rights and climate catastrophe.

Ah, yes, clearly his daughter is a “snowflake”, not the man who has taken to a national publication to whine about her. Nope. Clearly not.

Father, clearly unable to Google basic things, says his daughter has ‘decided’ to be bisexual

“I can’t converse with my woke 18-year-old daughter without getting angry,” he writes in the Telegraph. ‘”‘I like girls and boys,’ she announced recently. She meant it in a romantic sense.

“I sighed inwardly. ‘Here we go again,’ I thought.”

He then takes aim at how his daughter once decorated her bedroom with posters of Twilight star Robert Pattinson and had a long-term boyfriend throughout high school.

“She has now decided that she is attracted to both sexes,” he continues. “This would never be a problem for me; my children can be whatever they want to be, and I will love them equally.”

The father then proceeds to, well, make his daughter’s sexual orientation a “problem” and erases how she’s attracted to more than one gender. Truly letting his child be who she is.

“My daughter doesn’t like girls and boys; she likes boys. But she says she is attracted to both to jump on another woke bandwagon because for snowflake Gen Z, it’s trendy to be gender-ambiguous,” he adds, seemingly regurgitating what he read on Breitbart the other day and not understanding what bisexuality even is.

Considering bisexuality to be nothing more than a “trend” is a decades-long biphobic trope, countless people – including Labour Party lawmakers – tore into the Telegraph for contributing to the erasure, bigotry and straight-up ignorance that bi folk must battle against.

“Grim reading from The Telegraph,” tweeted Labour MP Charlotte Nichols, “with the biphobic trope that it’s a phase or something done for attention, with the paternalistic drivel that a father has a better sense of their (adult) daughter’s sexuality than their daughter does?

“Some girls do like girls and boys. Get over it.”

“Really, really shocked at the Telegraph for this,” a user said.

“Imagine hating your daughter so much that you go out of your way to publish a newspaper article invalidating her bisexuality.”

also, if you have decided you now dislike your daughter because your politics are different to hers and sometimes you argue then you’re clearly very shallow as a parent imo

“Also, if you have decided you now dislike your daughter because your politics are different to her’s and sometimes you argue then you’re clearly very shallow as a parent, in my opinion,” she added.

Social media users blasted the broadsheet for giving a man a thumping platform to spout biphobia, while bi users who themselves experienced biphobia from their families warned he’d unlikely hear from her again once she’s moved.

My mother gaslit me about how I’m not queer and just wanted to prove I was a “strident Smithie” with a “divergent sexuality.”

I don’t associate with her anymore. That’s what this complete piece of shit writer is heading for. https://t.co/d0F9DLAyZG

Here is the “I’m not biphobe but…” trump card again. I’m tired to see people that have this bigotry and don’t want to do better. If those people are like this with their near family, I don’t know what they will do with strangers. This big ignorance is a big problem 😑. https://t.co/NW9MhPoh7Y

Bi erasure is so ingrained in our culture that parents can get away with saying stuff like this about their own children. 🙃 https://t.co/AkO7zUOMyU

“I dismissed my daughter’s coming out as bisexual as her trying to be “cool” because I know her sexual orientation better than she does. Now she’s a shadow of her former fun-loving self. This must be because she is trying to be “woke”, not because I rejected her.” #GammonParent https://t.co/ilPypRLYxh