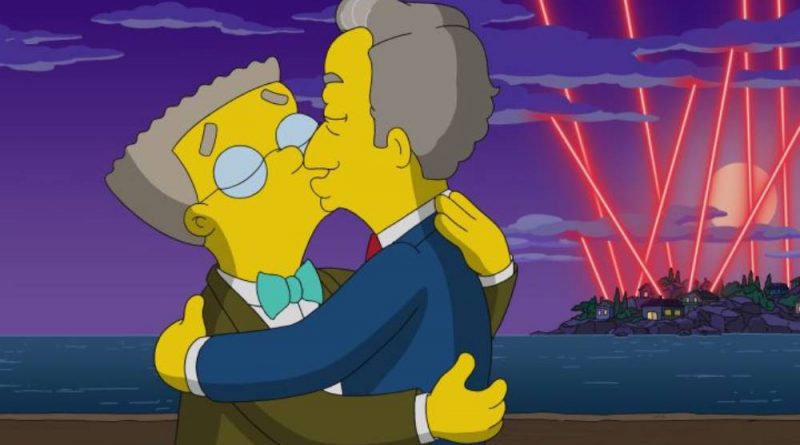 A writer on The Simpsons has explained how he worked with his gay son to make Smithers a “three-dimensional gay character”.

As viewers of the long-running animated series will know, The Simpsons has a long history of joking about Smithers’ sexuality – but that all started to change in 2016, when the character officially came out.

Recently, the show proved that it’s committed to making Smithers even more authentic with the episode “Portrait of a Lackey on Fire”, which sees Smithers whisked off his feet by fashion mogul Michael De Graaf (voiced by Victor Garber).

Writer Rob LaZebnik wanted to make sure the episode was realistic, so he enlisted the help of his gay son Johnny. The pair appeared on the Gayest Episode Ever podcast to discuss how they made Smithers into a more relatable gay character.

Speaking to hosts Drew Mackie and Glen Lakin, Johnny recounted a text exchange he had with his dad about Grindr while writing the episode. Rob texted his son to ask about the mechanics of using the gay hook-up app so he could make sure his joke was realistic.

“That text is one of the funniest things I’ve ever received, period,” Johnny said. “I think every gay man’s dream is for their father to text them that out of the blue asking how Grindr works.

“I think my dad’s specific question was like, ‘Do you swipe on Grindr?’ And I was like, ‘Absolutely not, you don’t.’ And that is the kind of thing that a straight person would throw in as a joke, something like ‘Oh, he swiped me on Grindr’, and then a gay person watching it would be like, ‘I feel so alienated by this content because you clearly don’t know what you’re talking about.’

“So I was really happy to be included and really grateful that I was able to lend a little more authenticity to the world of gay that they were creating.”

The pair also discussed the show’s often fractious relationship with LGBT+ representation on the podcast, and they acknowledged that Smithers hasn’t always been the best gay character on television.

“Something that I was really excited about was being able to reference old gay stuff from The Simpsons,” Johnny said. “One of my favourite things is in the background, Smithers has a poster for Sold Separately, the Malibu Stacey musical. That musical is one of my favourite bits ever and actually, it’s really special because it was in my dad’s first full episode of the show.

“Smithers and our family have this weird, storied history at this point. My dad wrote Smithers’ ‘coming out’ episode and now this episode with me, and it’s really cool to part of this evolution of Smithers into a three-dimensional gay character.”