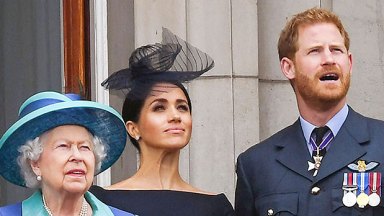 
Queen Elizabeth II, 96, invited Prince Harry, 37, Meghan Markle, 40, and their two children, including Archie, 3, and Lilibet, 1, to spend time with her at Balmoral over the summer, after they’ve had recent strained relationships with various senior royals over the past several months, The Sun reported. The royal reportedly arrived at her Highlands home on Thursday and is planning on staying in Craigowan Lodge, on the Balmoral estate, for ten weeks as her family joins her for some of the time. “Staff have been told to expect the full list of royals including Harry, Meghan and their children Archie and Lilibet,” a source told the outlet. “They are preparing for the Sussexes.”

Another source said that the Duke and Duchess of Sussex “barely had 15 minutes” with the Queen during her recent busy Platinum Jubilee this summer, and “Balmoral is the perfect place for them to spend a little bit of quality time with her.” Although they’re invited, however, other sources admitted they’d “be stunned if they did turn up” alongside other royals like Harry’s dad, Prince Charles, and brother, Prince William.

The news comes after Harry and Meghan reportedly privately visited Charles and the Queen when they stopped in England while on their way to the Invictus Games in The Netherlands earlier this year. The parents-of-two also introduced their daughter, who is named after her great-grandmother, to the Queen for the first time when they later returned to England to attend the Trooping for Colour parade during the Platinum Jubilee celebration in June. Archie and the Sussexes’ newest addition also reportedly had an “emotional” visit with their grandfather, Charles, around the same time.

“The Prince, of course, hasn’t seen his grandson Archie for a bit of time and so it was very special to have some time with him,” a source told ET about the visit. The source also called the moment “very emotional” and “a very, very wonderful thing.” A second insider also said, “It was fantastic to see” Harry, Meghan and their family back in England. “It was wonderful to have them back in Britain.”

Harry and Meghan’s latest visits and potential upcoming visit to England comes after they’ve been living in California since early 2020. The former working royals have settled into the southern part of the state, where they are neighbors with various celebrities, and have led a pretty private personal life away from the spotlight for the most part. Just a few days after they were seen at the Trooping for Colour event, they were back in Santa Barbara to settle back in their humble abode.