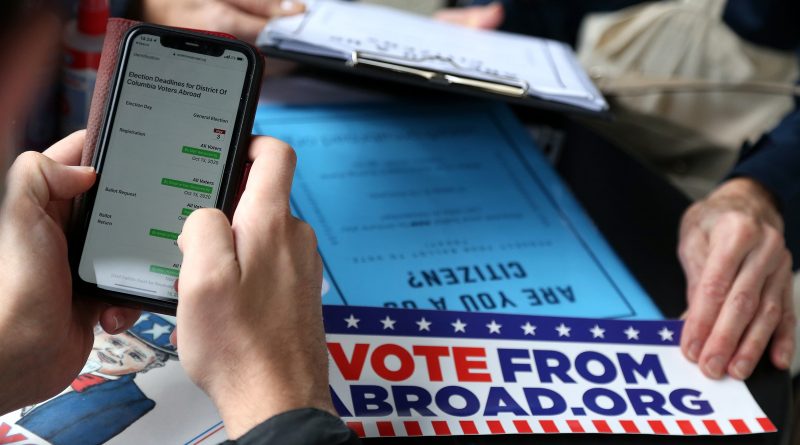 
On one of the final days of the U.S. midterm campaign, nearly a dozen Americans gathered in a small classroom at the London School of Economics in the British capital’s bustling center and started hitting the phones. Their pop-up campaign office—which was outfitted with American flag bunting, “VoteFromAbroad.org” banners, and trays of cookies and chocolates to fuel the evening—was one of many that had been hastily constructed over the previous month by the U.K. chapter of Democrats Abroad, the international arm of the Democratic Party. This was all part of a last-ditch effort to get out the vote among the millions of U.S. citizens living abroad. While some volunteers were tasked with calling and writing to overseas Americans to remind them to request their absentee ballots, others manned a virtual help desk over Zoom to assist voters as far afield as Canada, Ecuador, and the Netherlands.

These Americans are an ocean away from the political fray in Washington. But as far as many of these organizers are concerned, they have just as much of a responsibility to get involved ahead of the Nov. 8 vote. That’s because hundreds of thousands of overseas Americans across more than 180 countries turned out during the 2020 U.S. presidential election, enough to make a difference in some states. As the country prepares to return to the polls for the midterm elections—which will decide whether Democrats retain control of the House of Representatives, as well as a number of Senate seats and key governorships—they are determined to do so again. The results could have a profound impact on President Biden’s agenda and ability to pass legislation for the remainder of his term.

“Half of our membership votes in battleground states,” says Elizabeth Kelly, the treasurer of Democrats Abroad U.K. “All of those races where FiveThirtyEight is saying it’s too close to call—we are targeting them.”

Read More: How the Midterms Will Shape Biden’s 2024 Plans and his Legacy

As a voting bloc, Americans outside of the U.S. are easily overlooked. Though they collectively exceed the populations of most small states—estimates range widely from 4.8 million to 9 million, with the largest populations found in Canada and Britain—this disparate diaspora of émigrés, military personnel, dual citizens, and people born outside of the U.S. to American parents are largely out of sight and out of mind. Many of them are eligible to vote, though only a small fraction of them actually do.

But this is slowly starting to change. In the run-up to the 2020 presidential election, several U.S. states reported receiving record levels of overseas ballot requests compared to previous election cycles. The U.S. Election Assistance Commission, which sources the number of ballots cast by both overseas civilian and military voters directly from states, puts the number of overseas votes counted at 890,000—nearly twice as many as those in 2016 (496,000) and 2012 (479,000).

That may not seem like a lot when compared to stateside turnout (a discrepancy that can be explained in part by the fact that overseas Americans tend to face more obstacles when voting, including having to courier ballots back to the U.S. in time to be counted). But some states in 2020 were decided by as little as 10,000 votes. “We were able to deliver enough votes to secure President Biden’s wins in not only Arizona, but in Georgia as well,” says Candice Kerestan, the Munich-based chair of Democrats Abroad, adding that the prospect of increasing that turnout to as high as 10, 15, or even 20% “excites and motivates us every day.”

As with stateside voting, overseas turnout tends to decline in non-presidential election cycles. During the 2018 midterms, for example, overseas voters had an estimated turnout of just 4.7% compared to 7.8% in the 2020 presidential election, according to the Federal Voting Assistance Program, which was set up to help Americans abroad. But this year, organizers are optimistic that the upcoming midterms could prove to be another banner year for overseas voting. “2020 was a real eye-opener for Americans both at home and abroad and really showed us the importance of voting and staying engaged with the political process,” Kerestan says. “I think we’re going to see our highest midterm participation ever this cycle.”

In order to find out whether there is increased overseas voter interest in the midterms, and what impact they stand to have on the result, TIME reached out to a dozen competitive states that are predicted to be decisive in determining which party controls Congress. Of those that responded, three states—Arizona, Colorado, and Florida—reported receiving more overseas ballot requests this year than they did in 2018. Five—Michigan, Minnesota, New Hampshire, Ohio, and Pennsylvania—reported fewer ballot requests so far compared to 2018. (Figures for all states are still subject to change depending on their ballot request deadlines. Since elections in the U.S. are conducted at the state-level, rules and requirements vary by state.)

Florian Schiedhelm of Vote from Abroad (L) assists a U.S. citizen to register to vote absentee in the U.S. presidential elections to be held on November 3, at a Starbucks coffeeshop on Oct. 10, 2020 in Berlin, Germany.

“In these races where you see differences of 10,000 to 20,000 votes, that’s more than enough for an overseas vote contingent to change the election,” says Kym Kettler-Paddock, the communications director of Republicans Overseas, which hosts events with the Republican officials but is not formally affiliated with the party. Indeed, some of the tightest midterm contests—such as the Nevada Senate race, the Oregon gubernatorial race, and House races in Connecticut, New Hampshire, and North Carolina—could come down to thousands of votes. Past races, most notably the 2000 presidential election between George W. Bush and Al Gore, have been decided by much less.

Just as no one knows exactly how many Americans live abroad, there is also scant data on how they vote. Democrat and Republican organizers alike tell TIME that this community is more likely to vote Democrat than they are Republican. It’s a perception that is fueled in part by the demographics of overseas Americans, who are thought to be younger and more highly educated than their domestic counterparts—two factors that tend to predict support for the Democratic Party. Still, Kettler-Paddock and other Republican organizers abroad say that they believe many of the key issues on the minds of voters—namely the economy and rising crime—will favor their candidates. Kettler-Paddock’s optimism may also aided by the fact that midterms tend to favor the party not in power. Yet Democrats are counting on liberal anger over the reversal of abortion rights and ubiquitous gun violence to drive turnout in their favor. Although these kinds of issues may appear less relevant to U.S. citizens living abroad, many of whom reside in countries where healthcare (including abortion) is accessible and guns are strictly regulated, Kerestan says that they have been mobilizing.

“We got a huge spike in engagement and ballot requests coming in June when the [Dobbs v. Jackson Women’s Health Organization] decision fell,” says Kerestan, referring to the Supreme Court’s unpopular decision to overturn the constitutional right to abortion. “When we’re living in countries that recognize and prioritize a women’s right to choose and then we see such regression in the United States, that’s disheartening. We have mothers and sisters and nieces back home.”

Another, albeit less prioritized issue, will be the looming 2024 presidential election and many of the down-ballot races that will determine who will be tasked with overseeing it. The 2020 election, and former President Donald Trump’s efforts to subvert the outcome, did not go unnoticed by the rest of the world, much of which watched in horror as rioters violently stormed the U.S. Capitol on Jan. 6, 2021. That candidates echoing Trump’s election fraud falsehoods feature in nearly every state makes these midterms potentially consequential not just for 2024, but for the future of American democracy. Such was the message delivered by President Joe Biden in the final days of the campaign. “In this moment, we have to confront those lies with the truth,” he told voters in a speech on Wednesday. “The very future of our nation depends on it.”

The challenge facing organizers in the final days of the campaign is to convince enough overseas Americans that what happens at home still matters—and that if they vote in large enough numbers, they can sway it. “We have been convinced that our vote doesn’t matter, that it is not counted,” says Kelly. “But it does matter, and it will be counted.”