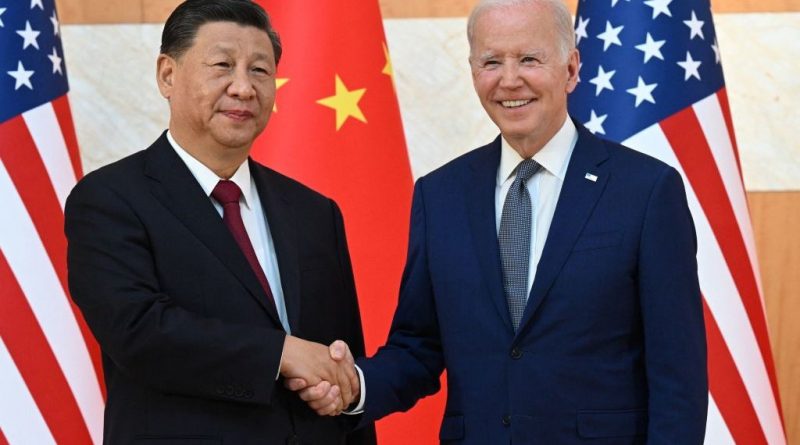 
Grand historical inflection points rarely take the form of long bureaucratic documents, but sometimes they do. On October 7th the Department of Commerce issued its revised policy on AI and semiconductor technology exports to China. The 139 pages of new export control regulations placed a de facto ban on exports to China of the advanced computer chips that power AI algorithms. Since more than 95% of such chips used in China are designed by U.S. semiconductor companies and therefore subject to U.S. export controls, loss of access to U.S. chips puts China’s entire future as an AI superpower in jeopardy. AI was the top technology priority listed in the Chinese government’s five-year economic plan for 2021-2026, so this action makes clear that the U.S. intends to block China from achieving its top technological goal.

Ten days after the new policy came out, Secretary of State Antony Blinken gave a major speech in which he said, “We are at an inflection point. The post-Cold War world has come to an end, and there is an intense competition underway to shape what comes next. And at the heart of that competition is technology.”

In announcing the end of the post-Cold War era, Secretary Blinken did not quite say that a new Cold War with China has begun, but he came close. Restricting commercial trade in military-relevant technologies is straight out of the Cold War playbook, and the United States and China agree that leadership in AI technology is critical to the future of military power. Chinese military AI systems, including ones that advertise lethal autonomous weapon functionality—are known to be full of U.S. chips.

However, preventing a military AI revolution in China requires not only blocking the sale of U.S. chips, but also preventing China from making such chips themselves or buying them elsewhere. To block China’s alternate paths, the Biden Administration is exploiting U.S. technological dominance of key chokepoints in the global semiconductor supply chain. Specifically, the U.S. is choking off China’s access to U.S. chip design software, manufacturing equipment, and equipment components—all of which are areas where U.S. technology is a critical and nearly irreplaceable input.

Whether or not the current strategy is part of a new Cold War, the U.S. would do well to pay attention to a key lesson from that conflict: the critical importance of making export controls multilateral.

Currently, the October export controls are fundamentally unilateral. The most advanced Chinese chip manufacturing facilities will no longer be legally allowed to receive new advanced U.S. equipment. For the advanced equipment that they’ve already purchased, Chinese companies will no longer be allowed to receive software updates, spare parts, or even advice from U.S. companies or persons.

This is the equivalent of a technological death sentence.

Read More: The Chips That Make Taiwan the Center of the World

Those who don’t follow the semiconductor industry closely could be forgiven for thinking that this is a niche topic, but computer chips are a strategic industry with major geopolitical implications. The semiconductor industry is forecast to generate revenues of $646 billion in 2022, but more importantly, it is an irreplaceable enabler of tens of trillions of dollars of annual economic activity worldwide. Today, semiconductors are found not only in data centers, laptops, and mobile phones, but also in automobiles, washing machines, electrical grid infrastructure, and nearly every type of military weapon system more sophisticated than a bullet. In the United States, semiconductors directly account for only 0.3% of GDP, but analysis by Goldman Sachs found that they are an important production input to 12% of GDP. The importance of semiconductors is best demonstrated by the drastic economic consequences of the recent semiconductor shortage. Analysis by the U.S. Department of Commerce found that the shortage “shaved an estimated $240 billion off U.S. GDP in 2021. The auto industry alone produced 7.7 million fewer cars in 2021 due to lack of chips.” In other words, U.S. GDP was a full 1% lower than it would have been if the semiconductor shortage never occurred. For comparison, the average U.S. GDP annual growth rate over the past ten years has been a mere 2%.

If a shortage of chips can cut economic growth in half, imagine what fully losing access to chip supplies could do.

These export controls don’t cut China off from all U.S. chip technology, but they do prevent China from building the advanced chip factories it needs to be self-reliant. Without critical U.S. technological inputs, especially manufacturing equipment, China’s advanced chip factories are like airlines cut off from Boeing and Airbus—the duopoly that supplies nearly all the world’s commercial passenger jets. More than a hundred countries have national airlines, but far fewer countries are capable of making commercial passenger aircraft. Competition in advanced semiconductor manufacturing is even tighter than commercial jet aircraft. Only a handful of companies are capable of operating the factories that produce advanced semiconductors. For some critical pieces of semiconductor manufacturing equipment, there’s only a single supplier in the world. Often that single supplier is an American company. There are important non-U.S. suppliers of semiconductor manufacturing equipment—most notably in Japan and Europe—but these companies generally specialize in different technological areas and don’t sell products that replace U.S. technology. Keeping with the aircraft analogy, even if one country would sell engines to China and another country sells landing gear, China’s not going to be able to build or even maintain a viable airplane without American wings, radars, flight computers, and spare parts.

In its quest for semiconductor supremacy, China has no viable alternative to using U.S. technology, at least not in the near term. Those key U.S. technology suppliers—companies like Applied Materials, LAM Research and KLA—are the chokepoints where the U.S. government is strangling large segments of China’s AI and semiconductor industries.

The geopolitical stakes of a battle for control of the semiconductor industry are as high as it gets, and China’s leadership, including Communist Party General Secretary Xi Jinping, has long known this. These sort of export controls—as well as the far more extensive and punitive package that the United States and our allies levied upon Russia following its 2022 invasion of Ukraine—are precisely what Xi feared.

In 1946, the British jet engine industry—in dire financial straits after the end of World War II—cut a deal to sell 25 Rolls Royce Nene Jet engines to the Soviet Union along with a license for the Soviets to domestically produce the engine. At the time, the Soviet jet engine industry was significantly behind the British. The British government secured a promise from the Soviets that the engine would exclusively be used for commercial passenger and transport aircraft. However, the Soviets promptly reverse engineered the Nene and designed the MIG-15 military fighter jet around it. Soviet leader Joseph Stalin himself reportedly said of the British, “what fools would sell us their secrets?” For the U.S. and our allies fighting in the Korean War, the MIG-15 was the scourge of the skies. U.S. aircraft losses to the superior MIG-15s were so devastating that the U.S. was forced to ground its bomber fleet at a critical point in the war.

The shock of British “commercial” technology playing a key role in upgrading Soviet military aircraft—which was known even before MIG-15s were deployed in Korea—played a key role in persuading the U.S. and its allies to establish a multilateral system of export controls. Rather than just restricting the sale of outright weapons to the Soviet Union, the new multilateral regime included a far more extensive list of dual-use technologies on the list of prohibited exports. A new international organization was created to manage and update the list.

The British Nene example is apt because China is decades behind the U.S. state of the art in some aspects of semiconductor technology, but key U.S. allies—including Japan, the Netherlands, Germany, South Korea, and Taiwan—are not.

The U.S. is the undisputed overall leader in the semiconductor industry, but that’s as the central node of a global supply chain in which other countries also possess highly advanced technologies and lead in critical niches. Some companies in these other countries have competencies that are a strong starting point for developing alternatives to U.S. technology.

U.S. technology is irreplaceable over the near and medium term, so the immediate consequences of this policy are essentially guaranteed to be disastrous for China. However, if China succeeds in persuading U.S. allies to assist China by developing and providing alternatives to key pieces of U.S. technology, then the long-term outcomes of this policy could be disastrous for U.S. national security and economic competitiveness.

China has strong negotiating leverage with foreign companies due to the size of its domestic market, which equipment suppliers see as a critical source of both current revenue and future growth. Chinese purchases of semiconductor manufacturing equipment were 29% ($29.6 billion) of the global market in 2021, up from 15.6% ($6.46 billion) in 2016.

The Undersecretary of Commerce in charge of export controls, Alan Estevez, was recently asked about the prospects for bringing allies onboard with similar export controls against China. He responded, “we make agreements with countries not companies […] we expect to have a deal done in the near term. This was not a surprise to our allies.”

Let us hope he is correct. China’s government has demonstrated a willingness to invest more than $100 billion to strengthen its domestic semiconductor ecosystem. There are two bits of good news for the United States in this regard. First, Chinese government investments in semiconductors have a history of being squandered by corrupt Chinese officials. Many of the leaders of previous rounds of Chinese government investments have recently been arrested.

Second, in its race to dominate the global AI and semiconductor industries, China has made clear that it views international companies not as partners, but as means to an end in a quest for domestic self-reliance. Chinese intelligence operatives have been arrested for trying to steal key semiconductor technology information not only from the United States, but from many of our key allies. Similarly, frequent Chinese government-backed cyber-attacks are a major concern for U.S. allies. This most recent package of export controls is almost certain to make China more aggressive in its efforts, which should be persuasive evidence to U.S. allies that these types of controls are necessary.

Many American politicians love to say “we won the Cold War.” However, the critical word in that sentence is “we.” It was not just the U.S., but the U.S. and our allies around the world. Whether or not history will ultimately declare this new era a second Cold War, it should be obvious that the U.S. isn’t going to win this competition alone.

When asked what he is doing to bring on U.S. allies to this new export controls approach, Undersecretary Estevez said, “it’s not just me. It’s the National Security Advisor, the Secretary of Commerce. We’re all on the phone working this.”

The U.S. just bet the future of national security that our allies will back us at this critical historic juncture. Let us hope that they do.