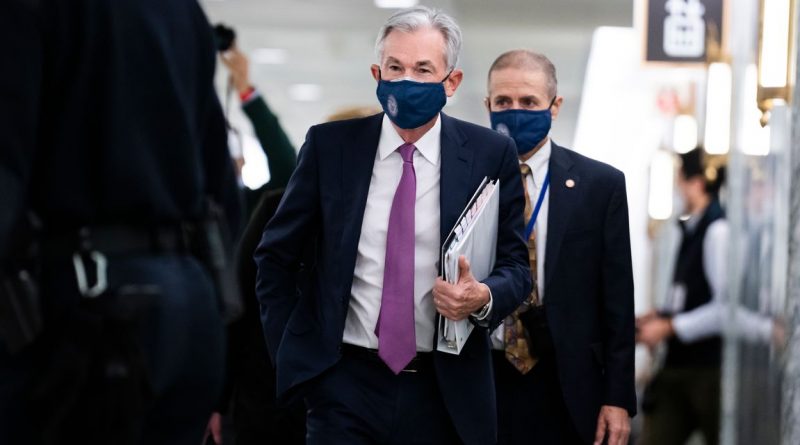 Fake it ‘til you make it might work in Silicon Valley. It’s a less practical strategy for the Federal Reserve, which looks ready to compound one mistake with another.

The central bank’s statement on Wednesday contained few surprises, but then Fed Chairman Jerome Powell started talking. At first, he offered a fairly balanced outlook of the risks, with inflation on one side and the threat to growth from Omicron on the other, with the risks tilting a touch more toward the former than the latter.

But the more he spoke, the more hawkish he sounded. He didn’t dismiss the possibility of a half-point rate increase and suggested that the Fed could raise rates far more quickly than the four increases the market had priced in. By the end of the day, the


Dow Jones Industrial Average
had turned a 518-point gain into a 130-point drop, and investors were pricing in more than four rate hikes.

By Friday, however, the overall averages conveyed little of that volatility. The Dow finished up 460.10 points, or 1.3%. The


Russell 2000,
which officially entered a bear market on Thursday, finished the week lower, by 1%.

Massive reversals were the norm, and the market went from simply oversold to “super oversold,” according to Doug Ramsey, chief investment officer of the Leuthold Group. “When there’s this kind of selling intensity, there’s usually another shoe to drop,” he says.

But even when the market bounces—and it will bounce—investors have to know that the clock is counting down to recession and the end of the bull market. The clock, in this case, is the yield curve, and an inverted one is the one truly reliable recession signal. An inversion occurs when longer-term rates, which are typically higher than short-term ones, sink below their short-end counterparts. That’s not just a signal that a recession is coming—it also helps create the conditions for one by making lending unprofitable for banks, which borrow short and lend long. Ultimately, the lack of credit causes a recession, though it usually takes months to occur.

The yield curve is flattening quickly. On Friday, the two-year Treasury yield closed at 1.17%, while the 10-year closed at 1.779%, putting the gap between them at 0.61 of a percentage point. On Dec. 31, that gap was 1.069 points. Since 1955, the yield curve has flattened about 0.8 of a point a year during the first year of a tightening cycle, which would mean the curve would invert sometime in the first half of 2023, says Jim Reid, global head of credit strategy at Deutsche Bank.

Recessions usually follow in eight to 19 months, which would put the next one in the middle of 2024. If the current market follows the historical path, the current upheaval, though painful, should simply mark a tantrum in risk markets that will pass. “The playbook is consistent with history,” he says.

But much will depend on how serious Powell is about raising rates to tackle inflation and the path of economic growth. David Rosenberg, founder of Rosenberg Research and former chief North American economist at Merrill Lynch, takes Powell at his word. Rosenberg expects the Fed to lift rates aggressively, only to find that the economy is growing at a much slower pace than it thinks. He isn’t wrong about the economy, which looks set to slow during the first quarter of 2022, thanks, at least in part, to the Omicron variant of Covid-19.

Rosenberg, however, worries that more than just the virus is responsible for the economy’s weaker growth and that it’s “late cycle,” meaning the Fed is starting its rate increases too late. If he’s correct, the Fed will tighten the economy right into a recession.

“Inflation will be killed by the Fed,” Rosenberg says. “Given the nature of this inflation, which is far more related to supply constraints than booming demand, it is going to create a renewed recession.” Again, if he’s right, the volatility we’re seeing now is just the beginning of a bear market.

Read more Up and Down Wall Street: Home-Builder Stocks Got Slammed—and There Are More Challenges Ahead

Richard Bernstein, chief executive officer of Richard Bernstein Advisors and Rosenberg’s former colleague at Merrill Lynch, agrees that the Fed is too late. But he also believes inflation is real, and that the Fed won’t have the guts to do what it will take to defeat it—tighten the economy into recession. “Recession [is] the only way to successfully fight inflation,” he says. “They don’t have the backbone to do that.”

Like Rosenberg, Bernstein believes the economy is late cycle, but it might just take longer to play out. That means owning sectors like industrials and energy, and adding some consumer staples for ballast.

Because as painful as the current drop has been, it’s the next one that will really hurt.

Write to Ben Levisohn at Ben.Levisohn@barrons.com