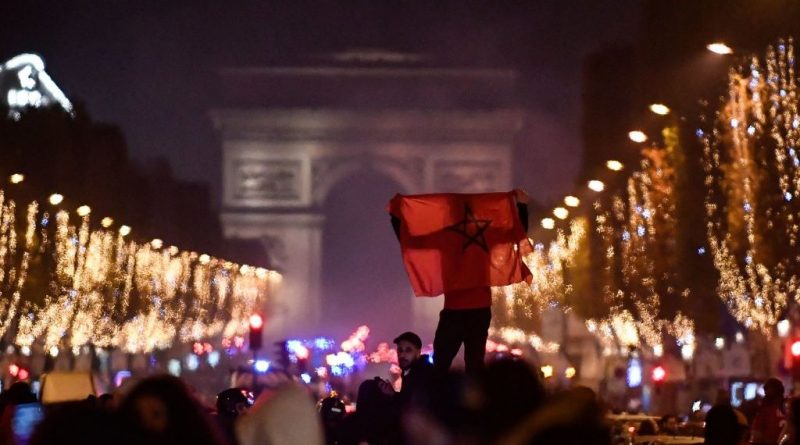 
When soccer powerhouse France—the defending World Cup champions—face off against the scrappy underdog Morocco on Wednesday night in Qatar, a lot more will be at stake than simply clinching a slot in Sunday’s final against Argentina. For the millions of North Africans in France, and Paris in particular, the contest between the two countries is deeply personal—and even political.

“Everyone here, everyone, is with Morocco,” says a merchant at a street market in the heavily immigrant neighborhood of Barbès in northern Paris, as he sets out his wares—brocade-trimmed traditional abaya dresses—on a cold, rainy morning. Among them, he props up two Moroccan flags—a sure draw for customers on match day. “Morocco is the best, and they are going to win,” he says, asking to be quoted as Mohamed Sisi, a name he confesses is not his. “France has no chance,” he adds.

Whether or not Morocco beats France, the country has in one sense already won as the first African and Arab country to make it to the semi-finals in the World Cup’s 92-year history. The fact that Morocco faces their former colonial master has infused the match with added resonance.

For many North Africans in France, deciding which side to back is no simple choice—and indeed, some believe they should not be forced to choose at all.

“When I’m in France, I’m 100% French. When I’m in Morocco, I’m 100% Moroccan,” says Benjamin El Jaziri, 69, owner of the L’Atlas, a Moroccan restaurant on Paris’s Left Bank, which has served traditional couscous and tajine dishes since El Jaziri bought the large space in 1991.

Over strong black coffees on a frigid Tuesday night, El Jaziri, who has lived in Paris since 1974, stood leaning on the restaurant’s wooden bar counter, discussing who he will cheer for on Wednesday. “Above all, it’s one’s roots that count, so I will support Morocco,” he says, before hesitating. “But it’s really difficult to say. I’m Franco-Moroccan.”

In fact, even the act of hyphenating one’s ethnicity—as Americans do—is considered taboo by many in France, where the question of national identity remains deeply sensitive.

France’s national education system, and indeed some of its laws, are geared toward subsuming ethnic identity—a principle around which far-right groups have built support for years. Since 2011, women have been banned from wearing hijabs in French schools and public buildings. While the law applies to all overt signs of religion, French Muslims widely regard it as targeting them.

The complex identity of France and Morocco’s squad

After the “Atlas Lions,” as the Moroccan squad is known, pulled off a spectacular quarter-final win against European heavyweight Portugal on Saturday, prominent figures on the right seethed. The far-right leader Éric Zemmour, whose failed presidential bid last April was forged on a virulently anti-Muslim message, railed against the huge celebrations by Moroccans in Paris.

“What would the King of Morocco think if, in Marrakesh, the French celebrated France winning?” said Zemmour, the son of Berber Jews from Algeria. Also enraging some right-wing politicians were the scenes on television of Morocco’s players, many European-born of Moroccan heritage, praying on the pitch after their victory.

“This is not just football,” says Emmanuel Rivière, head of international polling at Kantar Public, a polling agency in Paris. “It is at the very heart of the existential questions that French society is asking itself—about identity, feelings of belonging, and what we call ‘separatism,’” he adds, using a term used in France to describe ethnic communities that hue to lifestyles distinct from traditional France.

Indeed, these are questions players on both squads have navigated.

About half of France’s national team, called Les Bleus (the Blues), are the offspring of immigrants from West and North Africa. The heavily Muslim suburbs around Paris and other cities, or banlieues as they are known, have spawned a remarkable number of soccer stars. That includes France’s megastar forward Kylian Mbappé, 23, whose father is from Cameroon and whose mother is Algerian; he was born and raised in the poor Paris suburb of Bondy.

Even the Moroccan coach Walid Regragui, 47, was born in a town south of Paris, and the majority of his players were born in Europe of Moroccan parentage. Wednesday’s game is almost fraternal; Mbappé and Morocco’s star goal-scorer Achraf Hakimi are close friends, both playing for Paris-Saint-Germain in France’s Ligue 1 division.

So striking is the French team’s immigrant makeup that when it won its first World Cup in 1998, it was held up as an example of an equitable rainbow nation—something many North Africans in France might dispute.

When France again won the World Cup in 2018, Trevor Noah quipped on the Daily Show, “Yes! Africa won the World Cup!”—a reference to Les Bleus’ disproportionate number of Black players. France’s then-ambassador to the U.S. shot back angrily at Noah, tweeting, “They are French. They are proud of their country.”

But for the millions of North Africans in France, Wednesday’s game presents complicated feelings, pitting strong emotional ties to both ethnicity and homeland against their citizenship.

“We don’t know if we should support France, or support Morocco,” says Ayoub Simour, 22, a Paris-born son of Moroccan parents who writes for the Bondy Blog, a site covering the banlieues that is based in the Paris suburb where Mbappé grew up. “I will cheer for Morocco, because it is a unique opportunity for an African team to reach the final,” he says. “This is historic.”

“The expectations are huge”

The 750,000 or so Moroccan immigrants in France play an outsized role in the country, making up the biggest number of foreign-born students and the second-largest number of foreign-born doctors (after Algerians), according to a 2017 study. Added to their number is more than 1 million people whose families or themselves have moved from Tunisia and Algeria, France’s two other former colonies in North Africa.

On Saturday, Morocco’s stunning quarter-final win over Portugal united those communities in celebration. Thousands spilled out of cafés around Paris and on to the vast Champs-Elysées avenue, several beating the darbouka, the traditional North African drum.

“This is a pivotal moment for the Arab world, and much of the African continent too,” says Monica Marks, a scholar on North African politics at New York University Abu Dhabi, who watched Saturday’s Morocco-Portugal game in Barbès. Marks says she was amazed to watch the Morocco fans instantly switch their support to France just two hours later, when Les Bleus’ kicked off their quarter-final match against England.

That support will not be as carefree during Wednesday’s game, says Marks, who studies France’s political relations with its former colonies. “There are a lot of tensions about cultural identity,” she says. “The expectations are huge.”

Added to the semi-final’s political overtones is French President Emmanuel Macron—a hugely enthusiastic Les Bleus fan—who was set to fly to Qatar on Wednesday to attend the game. In 2018, Macron was in Moscow to see France play the World Cup final, and after their win, enveloped Mbappé in a bear hug, choking back tears.

This time, the politics are far more fraught—not least because of months of criticisms by Western governments and organizations over Qatar’s human-rights record, including the deaths of construction workers who built the World Cup’s infrastructure. There is also a mounting corruption scandal in the European Union’s parliament, with alleged influence peddling by Qatar. “I think it’s a political mistake,” Benjamin Lucas, a Greens member of the French parliament, told a radio show on Monday, in reference to Macron’s decision to go cheer on the French team in Qatar.

Rivière, of Kantar Public, says no one would expect Macron not to support his country’s players; he is the President, after all. But traveling all the way to Qatar for a semi-final game between two teams that are so intricately entwined, could instill uncomfortable feelings among French North Africans.

Macron’s presence in Qatar could also remind both Moroccans and French of the ongoing disagreements between their two countries. Last year, Macron halved the number of visas for Moroccans and Algerians wanting to come to France, saying those governments had failed to rein in illegal immigration across the Mediterranean. And nearly two years ago, Macron said he would offer “no repentances or apologies” for abuses inflicted on North Africans during decades of colonial rule.

France vs Morocco on the pitch

Resolving those bigger issues will take time. For now, there is a game to win.

At least for a few giddy hours on Wednesday, millions in France will be swept into the frenzied excitement over the game. “When you watch Rocky you want to support Rocky Balboa,” Morocco’s coach Regragui told reporters in Qatar after their surprise win over Portugal. “I think we are the Rocky of this World Cup.”

In Barbès, the Brakadabar café will project the game on three giant screens around the room, staff say. Down the street from the café, one resident, who asked to be known as Aksi, and who sells dates and homemade olive oil from his Algerian hometown of Biskra, says “Morocco will win, there is no doubt.” He adds: “Here we are not just Arabs, but a lot of Africans. And we’re all with Morocco.”

El Jaziri, the restaurant owner on Paris’s Left Bank, says he has decided to shut his restaurant on Wednesday night, since much of France will be glued to their TV sets. He says his winter hunting-season specialty—partridge cooked in honey—can wait for another night.

“We have waited for many years for this match, to be this close to the final,” El Jaziri adds, as he allows himself to dream about Morocco defeating the world champions—and its former colonial master. “Perhaps France will not be in the final,” he says. “In football, anything is possible.”