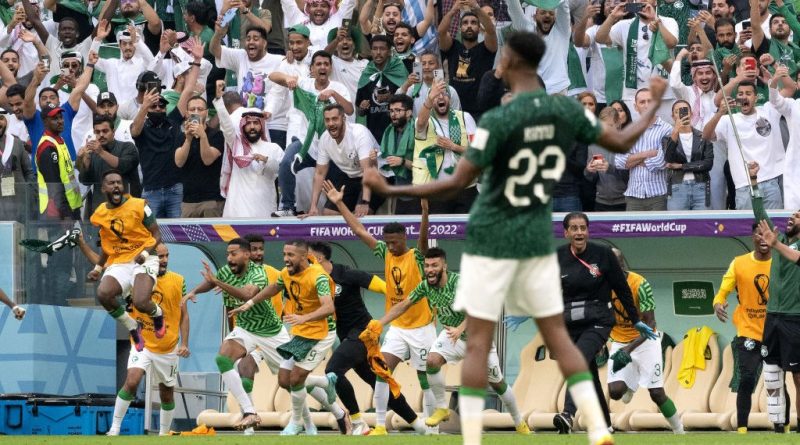 
After one of the biggest soccer upsets in history on Tuesday—which saw Saudi Arabia emerge as victorious underdogs in a game against World Cup favorite Argentina—an unlikely star emerged. It was not the kingdom’s star striker, Saleh Alshehri, who scored the team’s first goal; nor was it Salem Aldawsari, who put Saudi Arabia ahead of Argentina and ensured its ultimate 2-1 victory. Instead, it was the booming voice of Khalil al-Balushi—an Omani sports commentator working for Al-Kass Sports, a Qatari broadcaster—that stole the show.

When Aldawsari scored, al-Bulashi’s now-viral Arabic monologue invoked the language of an epic poem. According to a translation by an Arabic-speaking fan, al-Balushi roared “write this in history” and exclaimed “Allah, Allah, Allah” over and over again in deafening disbelief.

Al-Balushi added: “Here at Lusail stadium! You are making history! What a moment. Insanity in its purest definition. I speak from the insides of my heart. With the emotions of my heart. A proud Arab. And with this 2nd goal, a beautiful goal, a majestic goal. YES… Impossible is not a word that exists in the Saudi and Arab dictionary.” He continued by describing Aldawsari’s goal a “thunderous” strike, before calling his first name, Salem, over and over again.

That kind of impassioned commentary is well-known in the Arab world but is rarely seen by a foreign audience. Some on social media said it made English-language commentary feel a little lackluster by comparison.

Arabs have a particularly close relationship with soccer—which is the most popular sport in the region, and features many national leagues. As such, it has colloquially been dubbed a second religion to many. The game is played socially among children and adults alike, with the increased participation of women leading to the first ever Arab Women’s Cup in 2021. This love of soccer has led a number of Arab commentators, including al-Bulashi, Jordan’s Kahled al-Ghoul, and Saudi Arabia’s Fahd Al-Otaib to become widely-known figures.

But Arab commentators are hardly alone in their palpable passion for soccer. Spanish- and Portuguese-speaking commentators are also widely regarded as soccer monomaniacs. Latin American commentators, like Arab ones, are especially known for screaming “goal” with gusto.

According to the New York Times, the phenomenon in South America dates back to 1946, 14 years after soccer was first broadcast live on Brazilian radio. São Paulo announcer Rebello Júnior ecstatically celebrated a goal by bellowing an elongated “gooool”—the Spanish and Portuguese word for goal—until he ran out of breath.

Andrés Cantor, an Argentine American sportscaster who covered the 2018 FIFA World Cup, has been dubbed “Mr. Goal” for his energetic outbursts. The commentator told the Washington Post he doesn’t tire of being recognized for the way he yells “goal” and for his narration style.

“Obviously it conveys a lot of passion,” Cantor said. “The way the ‘goal’ scream works has a lot to do with several factors but mainly the importance of the goal.”

Cantor added that the word must hold a prolonged “ooooo” sound but reminded people he did not invent the oral tradition—he merely popularized the Latin American expression of love for soccer.

Cantor isn’t wrong. When Argentina scored its second winning goal against Nigeria during the 2018 World Cup in Russia, an Argentinian commentator was reduced to tears during a live broadcast. Similarly, Egyptian captain Mohamed Salah scored a penalty against Congo that brought his nation to the 2018 World Cup, and made an Arabic-speaking commentator cry in the process. If the emotions of Arab and Latin American commentators remain as high this year, it’s safe to say the world is set to witness a World Cup that will continue to make headlines in unexpected ways.