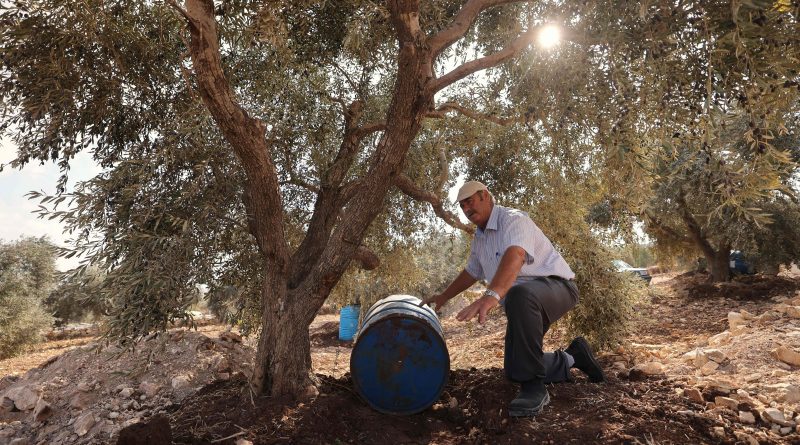 
Israel and the Palestinian territories are among the most climate vulnerable places on the planet. Yet the newly-formed government led by Benjamin Netanyahu has focused more on shoring up far-right support than addressing the challenges of global warming in the region.

Whereas worldwide temperatures have increased by an average of 1.1°C since pre-industrial times, in Israel and the surrounding areas, average temperatures have risen by 1.5°C (2.7°F) between 1950 and 2017, according to the Israeli Meteorological Service, with a forecasted increase of 4°C (7.2°F) by the end of the century. Meanwhile, rising sea levels—projected by Israel’s Environment Ministry to be as high as a meter by 2050, according to a new investigative report by Haaretz newspaper—threaten to obliterate Israel’s famed beaches, damage its desalination plants and undermine the sewage and drainage systems of many coastal cities. In the densely populated Gaza strip, where 2.1 million Palestinians are crammed into 365 square km (141 sq. mi.), sea level rise means a loss of precious real estate as well as saltwater intrusion into an already overtaxed aquifer.

In an arid region already threatened by desertification and declining precipitation, one would think that the looming climate catastrophe would catalyze a powerful climate movement. Instead, the whole thing is largely an afterthought. Climate made barely a ripple in the recent Israeli election, and in Palestinian politics, it has been sidelined by the government’s justified preoccupation with, well, Israeli occupation.In forming his new cabinet, Netanyahu replaced a vetted environmental protection minister with the former chairperson of the Knesset’s Labor, Welfare and Health Committee, who is widely considered to be more palatable to his ultra-conservative allies in the new government.

Politics trumping climate concerns is not unique to the Middle East. World leaders and global corporations promised substantial decarbonization programs at the United Nations’ 2021 climate talks in Glasgow, only to quietly walk them back a year later when war in the Ukraine and looming gas shortages threatened political stability. But in Israel and the Palestinian territories the threat is both existential and more acute.

In this contested land, climate action is hamstrung by zero-sum battles over territorial, political and historic rights, even as a warming climate exacerbates those tensions. “Everyone here is fighting over the land, but if we’re only going to spend our energy on politics, there won’t be any land worth living on left.” says an activist with One Climate, a joint Palestinian-Israeli movement advocating for climate justice. The activist, a Palestinian citizen of Israel, asked not to be identified for fear of compromising her work with a government organization. Even the group’s full name, One Climate From the Jordan River to the Sea, reflects the founders’ dilemma: by avoiding the contentious Israeli/Palestinian/occupied territories/annexed lands/West Bank and Gaza designations, the organization is hoping to focus on the one thing that all the region’s inhabitants should agree upon: the impending climate crisis.

Mohammed Amer Hammoudi, 67, displays his irrigation system under an olive tree in his orchard in the northern West Bank town of Asira al-Shamaliya on Oct. 25, 2021.

Both the Israeli and Palestinian leadership have pledged to reduce greenhouse gas emissions.The Palestinian territories, which contribute less than 0.01% of global greenhouse-gas emissions, have predicated the extent of their emissions reductions on whether or not the Israeli occupation continues: a 17.5% reduction of current emissions by 2040 if it does, and by 26.6% if it ends.

As for Israel, the country continues to develop newly discovered natural gas reserves off the coast. And when it comes to climate adaptation and environmental protection, it largely focuses on technological innovations such as the desalination of seawater and precision irrigation, costly solutions that only partially solve future problems. Nor do those innovations extend to the intertwined patchwork of Palestinian communities that share contested lands in the occupied West Bank, or to the Gaza Strip, setting the stage for increased tensions as resources dwindle. The heatwaves, water scarcity, food insecurity, storms, and flooding that come with a warming climate don’t stop at political boundaries, says Nada Majdalani, Palestinian director at EcoPeace Middle East, an NGO made up of Jordanian, Palestinian, and Israeli environmentalists. “We are all in the same boat. Even if the Israelis have resilience mechanisms in place. It doesn’t matter. When the Titanic hits the iceberg, everyone sinks.”

The problem, says Majdalani, is that both Palestinians and Israelis are so focused on the politics of their current existence that they can’t plan for future threats. The late Palestinian-American social commentator and literary critic Edward Said once dismissed environmentalism as “the indulgence of spoiled tree huggers who lack a proper cause.” That sentiment still lingers, Majdalani says, casting climate activism as secondary to establishing a fully independent Palestinian state. “The average Palestinian wakes up in the morning worrying about how to get to work without crossing a checkpoint. Their priority is the [Israeli] occupation. For the Israelis, it’s security, the sense that there is a dangerous enemy on the other side that needs to be controlled.”

Dror Etkes, an Israeli activist who campaigns against the growing number of illegal Israeli settlements in the Palestinian controlled West Bank, says that Palestinians are given little choice but to focus on the immediate threat. “Of course climate change is important. It’s going to influence life here enormously. But when you’re almost drowning, you don’t have the time to think about anything else. You just want to keep your head above the water.”

EcoPeace Middle East was founded in the wake of the 1994 Oslo peace accords in order to promote sustainable development and solutions to shared environmental challenges—especially the need for water—across conflict lines. Access to water has been a significant driver in the long-running Israeli-Palestinian conflict, exacerbated by Israeli control of most of the area’s fresh water sources, and the fact that the average Israeli household uses three times as much water as a Palestinian one, largely due to the latter’s reduced access to piped water infrastructure. Climate change will make the problem worse. EcoPeace’s Green Blue Deal initiative proposes to build regional cooperation and interdependency at a government level by harnessing Jordanian solar plants to power Israeli and Palestinian desalination projects on their respective Mediterranean coastlines. The water would then be piped into the Palestinian Territories and to Jordan.

Read more: What the World Can Do to End the Israel-Palestine Conflict

While European leaders have embraced the initiative, local activists are skeptical that the climate issue can be solved without addressing underlying political differences. Some 2 million Palestinians, for instance, live in the Gaza Strip, which Israel has blockaded since Hamas came to power through elections 15 years ago. Then, after hostilities flared with Israel in 2021, Israel further slowed or blocked the importation of spare parts, such as wide-diameter steel pipes vital for wastewater treatment.

As a result, some tens of thousands of cubic meters of sewage are seeping into groundwater and flowing into the Mediterranean Sea every day—resources that are used by Palestinians and Israelis alike. “It just demonstrates how ridiculous and short sighted the thinking can be,” says Majdalani. “The Israeli policy of blockading [certain] materials to Gaza is actually reversing badly on them. It’s like shooting yourself in the foot.” The two entities share the same land, water and sky, she says, but they act if they exist on separate planets. If political strategies get in the way of protecting what they already share, it’s hard to envision how they can plan for a future where those resources are even more at risk.

A Palestinian schoolboy stands near a wastewater channel that runs through the Gaza valley in Al-Mograqa village in Gaza on Nov. 6, 2022.

Even organizations like One Climate, which was founded to promote climate justice region-wide, struggles to knit together climate activism and environmental concerns without the group unravelling over Israeli-Palestinian politics. Influential Israeli climate activists worry that working with Palestinians will alienate Israel’s Jewish religious right, which is growing in power.

Meanwhile, the power imbalance between Jewish Israelis—even those who are politically left-wing—and Palestinians promotes fears among Palestinian climate activists that cooperation could be misinterpreted as “normalizing” relations before the conflict is resolved. It’s a situation that Majdalani, of EcoPeace, has frequently faced in her own activism. “There’s this pervasive sense of ‘we don’t cooperate with the occupier, it’s not the right political environment.’ But if we wait for the right political environment, we will lose more land. We will have more people suffering water shortages, more farmers leaving their farms, and the crisis will continue.”

Meanwhile, progress on the two-state solution has effectively stalled under a far-right government that opposes any efforts to create a viable Palestinian state. If the expansion of Israeli settlements on what is supposed to be Palestinian land in a two-state future continues at the same pace, says Etkes, the anti-settlement activist, “[Climate change] might not even be a Palestinian problem in 30 years, it might just be a purely Israeli one.”

-With reporting by Yasmeen Serhan / London