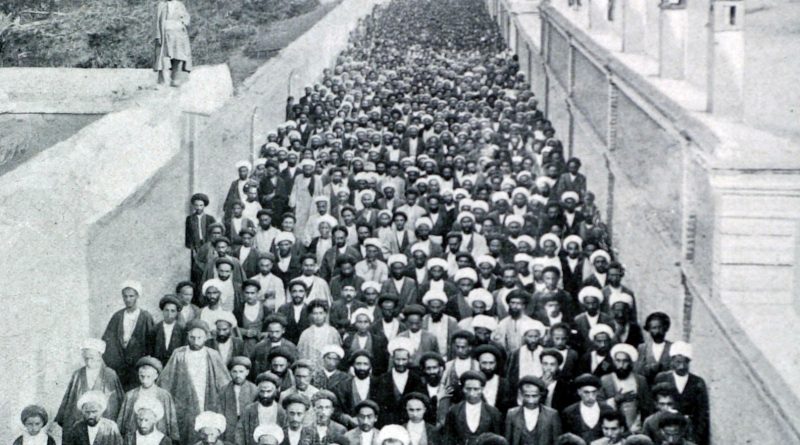 
What began as spontaneous protests over the brutal murder of a young Iranian Kurdish woman named Mahsa Amini by Iran’s dreaded morality police has now escalated into a massive nationwide revolution against the Islamic Republic. Iran, of course, has had three major revolutions over the course of the last century—in 1979, 1953, and 1906. But it is the first of those revolutions, the Constitutional Revolution of 1906, that provides the best historical analogy, not only for how the current uprising may succeed in its ultimate goal of bringing down the regime, but also what the rest of the world could do to help in that cause.

At the dawn of the 20th century, Iran faced a situation of rapid economic and cultural decline. The country’s natural resources were being parceled out to the British and Russians, its textile and manufacturing industries subsumed by unchecked imports from Europe. The people were left to fend for themselves, as a succession of debauched monarchs—the shahs—steadily sold off bits of the country to pay for their own extravagances. What few protections citizens enjoyed under the law were wholly at the whim of whichever shah sat upon the throne. For a great many Iranians, equity and social justice were as unattainable as bread and basic foodstuffs.

It was at this moment in history that a new generation of young, politically active men and women rose to the challenge. Their solution to the intolerable situation in which the people had found themselves was simple: the transfer of power from the monarch to the nation; from the few to the many. In other words, democracy.

Starting in 1905, a coalition of young revolutionaries, progressive clergy, and business leaders banded together to launch what would become the first democratic revolution in the Middle East. The goal was nothing less than equality before the law, regardless of race, class, or creed. One year later their efforts resulted in the drafting of a constitution laying out the rights and privileges of all citizens, and the establishment of an elected parliament where, to quote one delegate, “justice will be given to all the people, and the king and the poor treated equally.”

For a brief time, the Iranian Constitutional Revolution became the most successful anti-imperialist struggle in the world, drawing the attention of the international press.

“Persia has a parliament!” shouted the London Independent.

A group of constitutionalist clerics gather outside the British embassy in Tehran, 1906.

Unsurprisingly, the shah responded to these reforms with unrestrained violence, sending his troops to root out the revolution from every city and province. But Iranians had had their first taste freedom and they were not about to give it up without a fight. The revolutionaries retreated to the remote city of Tabriz in the northwest of the country and, from there, began sending urgent appeals to the four corners of the globe begging for help in their cause.

“To all the lovers of humanity!” they wrote. “To all who seek justice in five continents. Though we Persians, in religion and nationality, differ from you . . . in humanity and justice and the seeking of righteousness we are all alike… Forget for one moment the bigotry of creeds, the prejudice of nationality, and give us the justice of your unbiased conscience.”

Almost overnight, the city of Tabriz became a rallying cry in every country fighting for freedom from oppression. Vladimir Lenin, living in exile in Europe, sent an urgent appeal to his fellow Bolsheviks to travel to Persia and join the struggle against the shah. Support came from Russia, Georgia, and Turkey. Armenians, Arabs, and Azeris took up the cause as their own. Two Persian Jews served as commanders in the rag-tag constitutional army. Christians and Muslims, Zoroastrians, and Baha’i fought alongside one another. Women joined the revolutionary ranks by the hundreds. They threw off their veils, put on pants and vests, cropped their hair short, picked up rifles, and fought shoulder to shoulder with the men. The revolutionaries came from different countries, spoke different languages, worshipped different gods. But none of that mattered. They were all united in the fight against tyranny.

Amongst this multi-ethnic, multi-religious coalition of fighters, there was one lone American, a twenty-four year-old Christian missionary from North Platte, Nebraska named Howard Baskerville.

Baskerville was sent to Iran in 1907 by the Presbyterian church to teach English and preach the gospel. He had been in Tabriz for about a year when the city suddenly became the last bastion of the Constitutional Revolution. Although he was sympathetic to the cause, he was repeatedly warned, both by his church and by the U.S. government, not to support the revolution in any way. Washington had already concluded that Iranians were too ignorant of constitutional government, too uneducated and uninformed, too backward to be able to create anything approaching a real democracy. “History does not record a single instance of a successful constitutional government in a country where the Mussulman religion is the state religion,” read an internal State Department memo. “Islam seems to imply autocracy.”

Yet Baskerville had seen for himself what Iranians were fighting for. He had witnessed farmers and laborers, merchants and tradesmen, penniless peasants and soapbox preachers, the young and the old, men and women—all of them willing to die for a constitution few of them knew how to read. One day, he stood before his students and confessed that he could no longer bear to watch from a classroom window the suffering inhabitants of the city who were dying for the same rights that he took for granted as an American.

Baskerville quit his teaching job, abandoned his missionary post, surrendered his American citizenship, and joined the revolutionaries. On April 20, 1909, he was shot in the heart while trying to deliver food to the starving inhabitants of Tabriz. But his death became such an international embarrassment that the shah had no choice but to abandoned his attack on the city, giving the international coalition of revolutionaries the opportunity to march to Tehran and remove him from power. This was the first time in Iranian history that a popular uprising had successfully overturned the government.

It wouldn’t be the last. In 1953, the Iranian people once again rose up and expelled the shah from the country, only to have the CIA place him right back on the throne. In 1979, another popular uprising ended up replacing the shah’s tyranny with the tyranny of the Islamic Republic.

And now, here we are, witnessing what can only be described as a fourth revolution in Iran. Once again, the people are on the streets, fighting for the same basic rights that so many Iranians, and one American, died for in Iran’s first revolution. Once again, Iranians are looking to the world for help.

People gather during a protest for Mahsa Amini in Tehran on Sept. 22.

The lesson to be learned from the success of the Constitutional Revolution is two-fold. First, revolutions require the participation of a diverse coalition of people and interests. Those young revolutionaries clamoring for a constitution in 1906 could be ignored until they were joined by Iran’s merchant class and segments of the clergy. The biggest difference between the current revolution in Iran and the so-called Green Movement of 2009 is that the latter never managed to extend beyond a middle class, urbanized, youth movement. But the dramatic images pouring out of Iran, showing older women covered head-to-toe in chadors marching alongside unveiled women in jeans, is a clear indication that this uprising is different. Farmers and factory workers, retirees and guild members, even member of Iran’s vital oil industry, have all joined the protests against the regime. “We support the people’s struggles against organized and everyday violence against women and against the poverty and hell that dominates the society,” the Organizing Council of Oil Contract Workers recently announced.

If we start seeing the younger clergy and seminary students break from their elders and join the protests on the streets, then that may truly signal the end is near for the regime.

The second lesson to learn from Iran’s first revolution is that uprisings like these can only succeed if the world is watching. Right now, there are mass protests erupting in cities across the world in solidarity with Iranian women. We are waiting the birth of the same multi-ethnic, multi-faith coalition that helped defeat tyranny in 1906. No one is advocating that outsiders pick up rifles and fight alongside Iran’s revolutionaries, as Howard Baskerville did a century ago. We have something the Iranian regime fears even more than guns. We have our voices.

The Iranian government is telling protesters that no one sees them. No one cares. Their cries for freedom are being shouted into darkness. And, indeed, if you turned on cable news, you may be inclined to agree.

We must prove the regime wrong. On this global day of solidarity with Iran, we must amplify the voices of this revolution, use our platforms to shine a light on the government’s atrocities. We will not let the world turn a blind eye to what is happening in Iran. We will make sure that the young men and women risking everything to raise their voices will be heard by the world, just as they were a century ago.

You are not alone, we will shout. We are all with you.

A man looking at the water, reportedly colored red in protest against a deadly crackdown on three weeks of protests sparked by the death in custody of Mahsa Amini, in a fountain outside the Artists Forum at Honarmandan Park, Tehran, on Oct. 7.