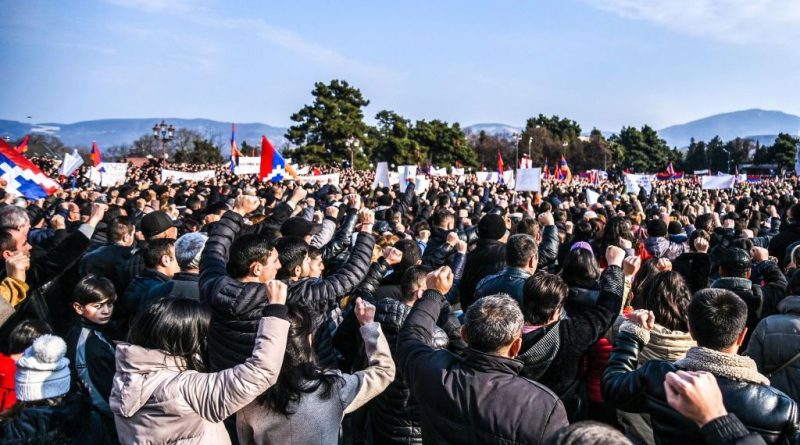 
For the past five weeks, the region of Nagorno-Karabakh, sandwiched between Azerbaijan and Armenia, has been blockaded by Azerbaijan. As much of the world celebrated Christmas and New Year, over 120,000 Armenian residents of the region—the oldest continuously inhabited Armenian homeland, dotted with Armenian churches and monasteries and monuments predating the spread of Christianity to Europe by decades—were cut off from the world.

A group of Azerbaijani citizens identifying as “environmental activists” barricaded the Lachin corridor, a mountainous road that serves as the only path between Armenia and Nagorno-Karabakh, since December 12. The flow of food and medicine fell to a trickle before the supplies essential for the continuation of normal life gradually disappeared altogether. A place that once received 400 tons of food and medical supplies daily now barely receives a few carloads on a good day. Hospitals have indefinitely put surgeries on hold. Children are going hungry. There is an acute shortage of fuel as temperatures drop to below -4°C, and families are burning scraps to heat their homes.

Armenians, a people who endured a protracted genocide under the Ottoman Empire before being exposed to Soviet autocratic rule in the 20th century, are being subjected to collective punishment in the 21st century with the intent of driving them out of their home.

Nagorno-Karabakh, a historically Armenian territory, is known to Armenians as Artsakh. Despite its history and demography, it was handed to Soviet Azerbaijan in 1921 by Joseph Stalin, who implemented the imperial method of disrupting cohesive national and ethnic communities to keep diverse populations in check. In 1988, the people of Artsakh voted overwhelmingly in a referendum to dissolve Moscow’s artificial cartography, secede from Soviet Azerbaijan and assert their Armenian identity.

Read More: History Suggests This Winter Could Be Dangerous for Armenians

This defiant act of self-determination resulted in yet more massacres of Armenians, whose wish was not honored. Upon the USSR’s collapse, Artsakh ended up inside the Soviet frontiers inherited by Azerbaijan. The Armenians, however, defeated Azerbaijan in the First Nagorno-Karabakh War, which lasted until 1994, when the region proclaimed its autonomy. Then, in 2020, at the peak of the COVID-19 pandemic, Azerbaijan launched a surprise offensive—now known as the Second Nagorno-Karabakh War—with the open involvement and assistance of Turkey.

Azerbaijan wanted the land—without the people who inhabit the land. Its battlefield gains were followed by a ruthless effort to raze all traces of Armenian history. While Armenia maintains a medieval mosque in its capital, has excellent relations with the Islamic world and welcomes people of all faiths, Azerbaijan has taken to disfiguring and destroying Armenian churches in the territory it took as a matter of policy. Hundreds of Armenian servicemen still remain in Azeri captivity.

The humanitarian catastrophe we are now witnessing—or, more accurately, the world is refusing to witness—is a textbook enactment of ethnic cleansing. More than a dozen nongovernmental organisations, including Genocide Watch, have issued a stark warning that Azerbaijan’s blockade is “designed to, in the words of the Genocide Convention, deliberately inflict conditions of life calculated to bring about the end of a national, ethnic, racial or religious group in whole or in part. All 14 risk factors for atrocity crimes identified by the UN Secretary-General’s Office on Genocide Prevention are now present.”

The only lifeline for Armenians in Artsakh is that slender road that connects them to Armenia.

Volunteers at home and in Armenian diaspora communities are doing all they can to help. As the former president of Armenia, I have decided to give the pension set up for me in law to humanitarian causes in Artsakh. Such efforts cannot, however, succeed in isolation. History—Armenian history—teaches us that the success of genocidal campaigns is always dependent on the silence of the world. It is time for the international community to speak up.